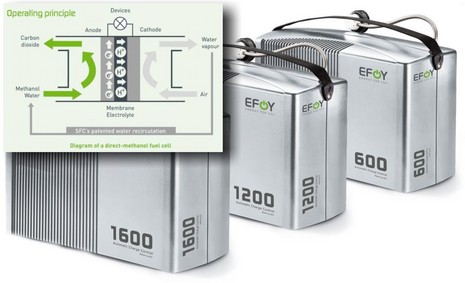 It’s easy to understand why the Newport Boat Show judges chose the EFOY fuel cell as Best New Product (even given an interesting group of nominees).  Those boxes above can automatically charge a boat’s batteries at 600, 1200, 1,600, or even 2,200 watts, depending on model, using just a modest amount of methanol, while apparently emitting just a little noise and damp carbon dioxide gas. But do they make sense on the practical level?

I don’t know the answer to that question, but I am curious.  Battery power is a big issue on Gizmo, as it lives on a float without a shore connection and when I cruise I like to anchor or moor out. In fact, I haven’t plugged the boat in since I brought it up from Connecticut in April. And I do not like to run its noisy generator, even dream of losing it.
I’m definitely going to research a possible solar panel system this winter.  But what about EFOY?  The German manufacturer, SFC, has been making them for a while, and now they are distributed here by US Marine Products.  But you’ll see that the hardware cost is steep, even in EFOY’s own comparison below, and I can’t find evidence that even European boaters are actually using them (though there is a lot of EFOY discussion on this U.K. motorhome board).  Does anyone know more about this product or the underlying technology? Willing to opine? 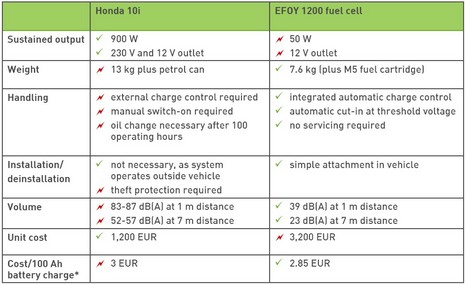