DBE! is my new shorthand for “Don’t Blame Electronics!”  And the collision of Ella’s Pink Lady with the Silver Yang off Queensland, Australia, last September is a terrific example (especially as no one got hurt).  I first heard about it in a Panbo comment focused on the “limits in detectability of Class B AIS” that the Australian Safety Board uncovered, which I’ll discuss after the break.  But I sure hope that the Class B naysayers who may jump on this news actually download and read the full report first.  Then they’ll know that the AIS data collected by a shore station and shown on the above chartlets (click for full size) was available on both vessels, and could have easily been used to prevent the accident…

In fact, the AIS data was apparently so good that it documented the exact moment of contact!  In fact, either watch keeper could also have avoided the collision by using their radar, or just their god given eye sight!  Sorry…I get agitated…but this accident is not about failed electronics; it’s about piss poor seamanship of nearly mythical proportions.  Talk about negative stereotypes!
On the one hand is everyone’s worst case of a single-handed offshore sailor. The skipper of Ella’s Pink Lady was apparently cat napping at the time of the collision, in a fair amount of ship traffic, and for reasons unexplained had neither her AIS alarm nor her EchoMax active radar responder turned on.  She was also in the habit of confusing herself by running her perfectly competent MFD with the chart north up and the radar head up.  (Charlie Doane, incidentally, has been doing some great blogging about the teenage circumnavigation follies, as well as fantastic coverage of the Reid Stowe’s 1,152 day whatever-it-was…voyage doesn’t seem to apply.)
I feel a little sympathy for Jessica Watson just because she was 16 years old, but as for the second mate of the bulk carrier Silver Yang, not so much.  The SOB did absolutely everything that gives ship drivers a bad reputation, which most of them don’t deserve.  He pretty much ignored the third mate’s log entry about sighting Pink Lady just before the midnight watch change, as well as his electronic tools.  He also seemed to have a poor understanding of core anti-collision viligence — i.e. watch out for anything with a constant bearing and decreasing range — and, even worse, he did virtually nothing to help Jessica after the collision.  The only slightly reassuring character in this story is the master, who was on the bridge a minute after finally being called, and was apparently beside himself about the mate’s failure to avoid the accident and failure to stop and help afterward.
Now what about the “Class B detectability” issues that will probably become the most talked about aspect of the just-released report?  Well, in truth, they are darn vague, mostly involving well known issues like the fact that many older Class A transponders can’t yet decipher a Class B boat’s name and other static data, though they do see its MMSI, position, COG, & SOG.  But the report does reference a 2008 study of Class B performance which found that “17% of vessels fitted with Class A AIS units did not report Class B AIS detections.”  Which doesn’t sound that bad to me, as I’ve never expected perfection and take comfort in the 83% of vessels that did see the Class Bs.  And get this line:  “The report also noted that the lack of detection issue was, to some extent, caused by vessel masters not recognising the detection on their AIS unit display.”  In other words, the electronics worked, but the humans didn’t.
At any rate, the report is a good read for any boater.  We learn by the mistakes of others.  But I especially hope it’s read by those who want to blame Class B AIS for accidents, or even consider relying on it or any other single tool to stay safe at sea. 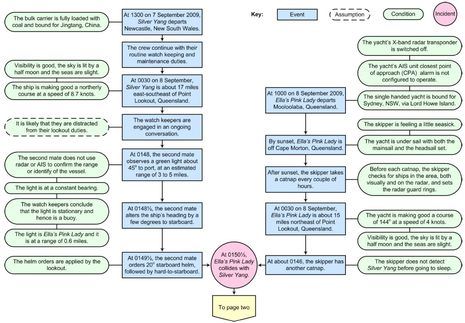