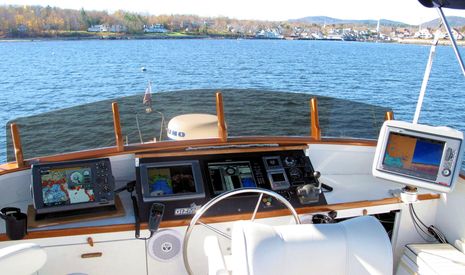 I was happy to do some late season cruising and electronics testing on Gizmo this year, and am also happy that she’s snuggled high and dry under shrink wrap now that winter — including at least a foot of the white stuff — is really here.  But something I’m really excited about in 2011 is my plan to take the boat south next fall.  Oh, I don’t intend to stop working; in fact, if the manufacturers continue to cooperate with what may be the industry’s longest testing program,  Gizmo’s flying bridge will look fairly similar to what I put together this season. (Which, come to think of it, I haven’t shown off until now; click above for a bigger image, and be assured that I have hundreds of screen shots yet to sort through and write about.)  The thought of a long gunkholing, blogging, and boat-show-ing circuit to, say, Charleston and back is sure motivating me, though…

Truth be told, this lad of 64 has been going to the gym every day in an attempt to reverse the ravages of too much time at a keyboard.  And I just had my house re-roofed, which is only the first of several largely proactive repairs designed to keep my marriage intact even while I’m away for what may be many weeks at a time.  (My beloved spouse, you see, is as passionate about her work as I am about mine, which is wonderful most of the time, but not in terms of this trip.)  And I can’t visit Gizmo via ladder and shrink wrap door without dreaming up another project. 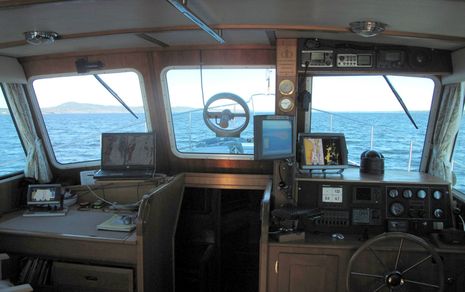 The other day, for instance, I think I finally figured out the slickest way to install a fairly large LED backlit LCD for work computing, entertainment, and testing marine software that may not work well on the little Datalux police car PC I installed last summer (and like a lot).  I had been looking into multi-jointed VESA mounts that might let me hang the screen from the overhead and fold it away up there when not in use, but now I realize that I could fasten even a 32″ screen — they’re getting thinner and lighter — to the underside of the swing-up chart table door.  I also plan to make the front of the former chart drawer removable so that, like the screen, the keyboard, mouse, and other paraphernalia will be invisible when I close up my onboard office.  It’s always been a lovely spot to work with paper charts, as you can see in this photo of the lower helm before I started hacking around, and it will remain so…but with a very 21st century twist!
The area around the wheel will remain pretty much as built this season, though I may have to change those Azek panels (easy) to accommodate a different mix of gear (and I will finish the trim ;-).  But there’s going to be a lot of work behind the scenes.  I’ve almost finished removing the main battery bank alternator, hoping to replace its guts and regulator with some smarter stuff.  And next week I’ll start analyzing Gizmo’s circuits in anticipation of some experiments with distributed power.  There’s also a solar panel bank to figure out, as well as added N2K sensors — like an analog-engine-converter, fuel flow, and various alarms — and an improved antenna strategy.  And much of the gear you see in these photos is now in the lab, soon to be set up for bench testing some of the stuff I’ll try in the real world next spring.  Did I mention that we hope to gunkhole our way up into the Bay of Fundy when my best mate is on school vacation in July?
If nothing else, my current excitement level is an excellent way to head into the depths of winter in Maine.  Here’s hoping that you too have sugar plum boating visions dancing around, and will have a very happy new year! 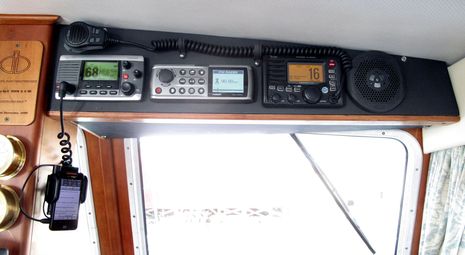