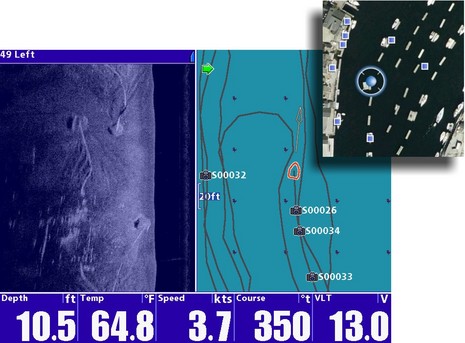 The cropped Google Earth iPhone image upper right shows Gizmo’s location (Google Maps version here) among the strings of mooring floats in Camden’s inner harbor, strings I ran up and down with the Humminbird 1197C now installed on Li’l Gizmo.  Over and over again, because I couldn’t believe the detail I was seeing with side imaging!  There are thousands of Camden Harbor images on the web (including on Panbo), but I don’t think anyone, divers included, has seen the bottom as well as in that bluish half screen above.  Ever wonder how all those 30′ x 6′ two-boat floats stay safe and orderly in 10 feet of water plus 10-12 feet of tide?  Well, that’s my float’s up-harbor 2 ton granite mooring at the screen top left, just west of my northern neighbor’s down-harbor block. You can see not only the heavy bottom chain, and the furrows it’s been digging when tide and wind shift Gizmo around, but even — once your eye is trained — the 6″x6″ skid under the float itself (that straight white line lower left).  And this image was no fluke!

Humminbird SI seemed to easily see all the mooring gear in the inner and outer harbors, even though the latter was choppy.  Admittedly the single mooring image below is particularly detailed, apparently showing bottom chain, top chain to the bouy, and even the pick up line. They are leaning into the middle of image because they were closer to my boat than the bottom as I drove by (side scan vision is weird that way)… 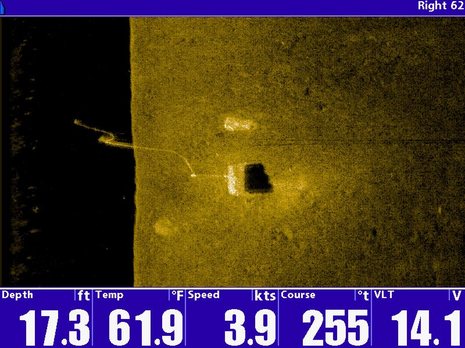 Of course if you’re actually in the boat it’s much easier to learn this form of sight.  In the screen below I had just passed another of those 30′ floats close (like 10′) on my starboard side. You can see the chains rising from the bottom, and their sonar shadows (these are big chains, like 5/8″ and 40′ long, meant to dampen float motion). You can also see the 6 semi-submerged poly float tubs that hold the float up, and I’m pretty sure those white echos hanging below the float ends are big fronds of kelp, or maybe clusters of hard barnacles on the kelp. 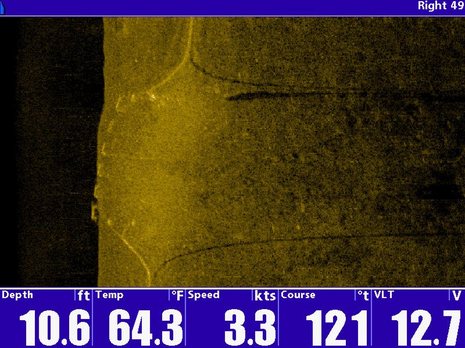 In the next screen below, I’m just passing the bow of a 40′ sailboat anchored in what I did not before realize is a rocky section of the outer harbor.  I think the anchor may be buried in the muck and further hidden by the shadow of that rock lower right.  Certainly you can see the chain and rode snaking across the bottom (possibly hung on another rock) and then coming to the surface where you can clearly see the boat’s bow. 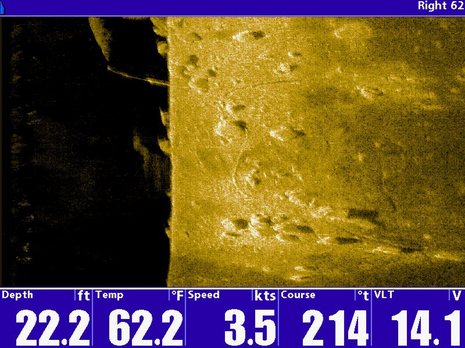 Moving deeper, this next screen shows one of the nun buoys at the harbor entrance.  I’d guess that’s a mushroom anchor sticking part way out of the mud, and that chain along the bottom gives some sense of how far the bouy can be blown off station, particularly at low tide like this. 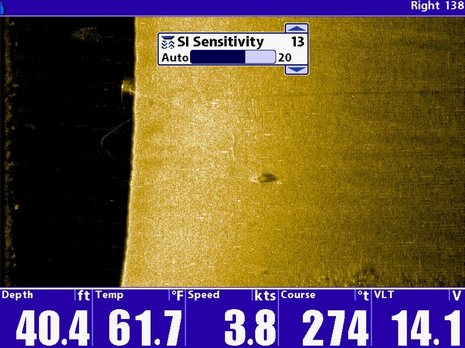 I also tried side imaging split screen with regular sonar. In most cases the sonar completely missed the structure seen in SI, like the lobster trap and its line below. 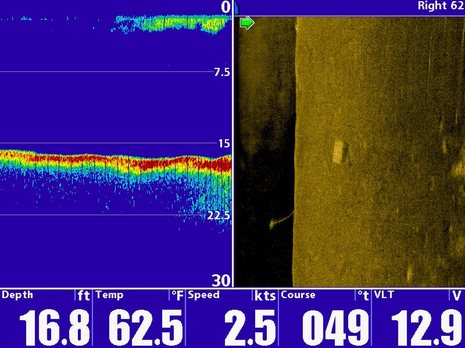 But in this final screen, something on the bottom is captured by both sonar technologies.  What it is I don’t know. Guesses? 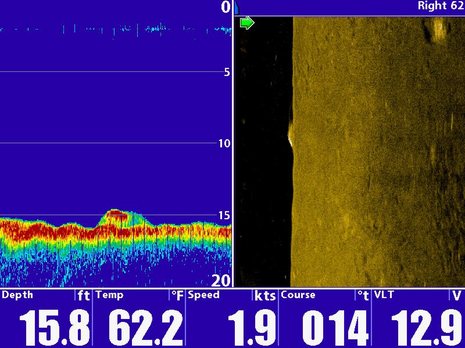 Sorry for the over abundance of screen shots, but I feel like I just got an amazing new view of a favorite place, and a potentially valuable tool (my float’s up-harbor mooring needs to be moved, for instance, and images like the top one will really help do it right).  And there’s more to do, like trying still deeper water, and figuring out what’s possible when you record SI and play it back either on a Humminbird machine (many sizes support SI, but I’m glad I’m seeing it on the biggest screen) or on a PC.  I do know that the screenshots I’m taking are also recorded as waypoints (see top image), which should make it fairly easy to find something again.  I also hear that Humminbird is coming out with SI software improvements this fall, and of course Lowrance will soon have its StructureScan version.  More to come for sure, but I already wonder if many professional mooring tenders use side imaging, or would if they knew what it can do for them.  You should have heard the excitement in this guy’s voice.