IBEX ConnectWorld, thanks to Chetco Digital 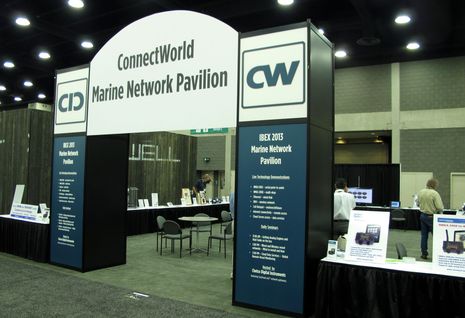 A surprise high point of last year’s International Boatbuilders Exhibition (IBEX) was ConnectWorld. For several years the National Marine Electronics Association (NMEA) had staged a substantial ConnectFest NMEA 2000 networking demonstration on the show floor — remember the Fish Gate 100? — but for some reason they dropped out in 2013. I arrived skeptical about a hurried effort to keep the idea alive managed by a manufacturer instead of NMEA. What I found, however, was that Chetco Digital Instruments had put together a nice demonstration of multiple brand devices sharing data across multiple networks. While NMEA 2000 made a lot of it possible, there’s some great development going on beyond the N2K backbones and I’m excited about what we’ll see in Tampa at IBEX 2014…

If you check out the text on the ConnectWorld entrance above you’ll see a list of marine related networking elements that starts with NMEA 0183 and 2000 but goes on to Ethernet, WiFi, cellular data communications, other Internet connections, and finally The Cloud. And that is the larger truth of what’s happening on many boats these days. Not only are MFD’s monitoring and controlling all sorts of systems beyond navigation, often with mobile devices involved, but an obviously big area of future marine electronics development is getting boat data easily into the cloud, both for our later enjoyment and also for better care of our equipment.

Though not on the list, the translation of analog engine and other data into more easily networked forms — mainly NMEA 2000 — is a significant part of this process and was very much in evidence around the ConnectWorld device corral. In fact, Chetco started as a company mainly focused on translating traditional engine sensor output into forms that can be displayed more precisely and flexibly (and also logged), as suggested in the SeaGauge display above and described in this 2011 Panbo guest entry… 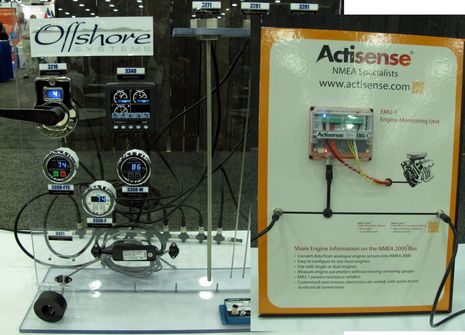 But even on short notice, the 2013 ConnectWorld was not just a Chetco product demo. Besides that bouquet of Offshore Systems tank monitoring gear, there’s the Actisense EMU-1 which competes pretty directly with the Chetco SeaGauge and which I installed on my old Volvo Penta diesel last fall (round two testing to begin pretty darn soon). The point is that ConnectWorld attempted to include many manufacturers, and IBEX management assures me that this year every relevant exhibitor has been invited to participate in a more sophisticated demo that will be called The Connected Boat. NMEA will be involved again and Chetco CTO Joe Burke will continue to serve as ringmaster (and networking troubleshooter). He too has assured me that the goal is to demonstrate how many brands and layers of technology can work together for the benefit of builders, refitters, and their customers. 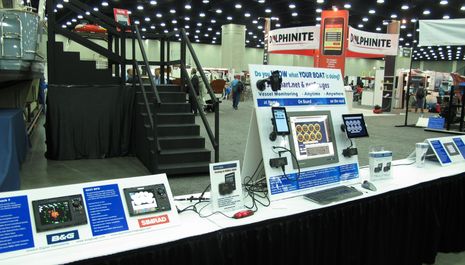 Here’s another section of ConnectWorld 2013 with Navico demonstrating how its MFDs can show engine and other data, and Chetco showing off its work at the outer branches of marine networking. Its line of SeaSmart Gateways able to serve boat data to mobile devices and beyond has come a long way since I tried one in late 2011. When Joe Burke and I took part in an IBEX seminar about marine wireless advances, he demonstrated a new “PushSmart” protocol with which a second-generation SeaSmart SDL module can both log data to an SD card and also automatically push it up to the cloud when possible. 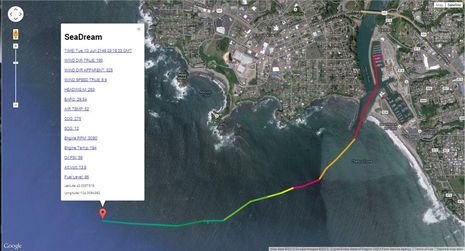 So now Chetco is building out a HelmSmart Web portal where SeaSmart users can access their data in various ways like ChartSmart, GraphSmart, and netGauges. Burke told me about several very practical uses like a Coast Guard project comparing various engine fuels, but wouldn’t it also be fun to have a data history of trips as suggested in the screenshot above. Actually, you can view a “tape” of that trip yourself and you’ll also see the area that Joe likes to fish and that gave Chetco its name. 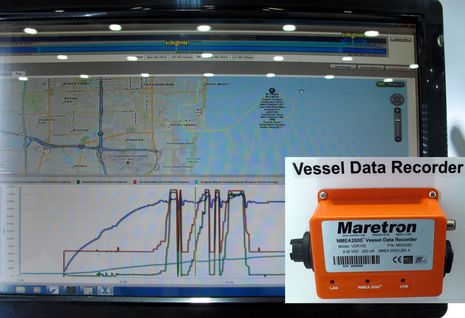 I don’t recall much Maretron presence at ConnectWorld 2013 but I did see some similar thinking at their nearby booth. Their VDR100 data recorder doesn’t employ a cloud stradegy but the included N2KExtractor analysis software (which you can try) seems quite powerful.

At any rate, I’m hoping to see Maretron and many other companies represented in The Connected Boat demo area this September. The concept as I understand it goes well beyond a corral of networked sensors and displays. Apparently there will be at least faux engines, tanks, batteries, charger/inverters, steering systems, etc. all talking to a central helm section and then to mobile device and off-boat areas. And I gather that the exhibitor response has been so enthusiastic that IBEX is already planning a larger Connected Boat area in 2015!

I plan to attend IBEX 2014 in Tampa, hopefully fresh from testing various connected boat products while getting Gizmo to the Chesapeake Bay, and I’ll also be helping with seminars about wireless marine advancements and interfacing/logging engine sensors. Finally, sorry to enthuse about a trade show to many readers who aren’t in the trade, but hopefully discussions like this hint at where marine electronics is headed. 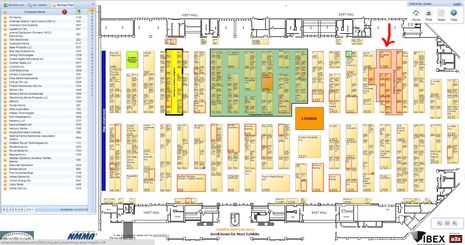