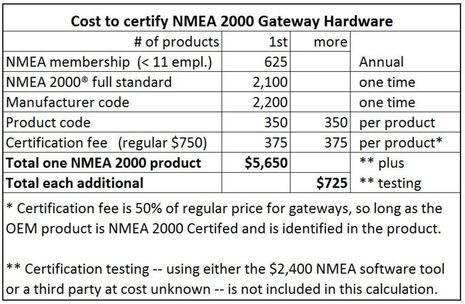 A few weeks ago I added a comment to an entry about Chetco and DMK Ethernet/WiFi NMEA 2000 gateways that caused some anxiety in the developer community. I reported that “NMEA has essentially served Chetco with a Cease & Desist order regarding its various SeaSmart ‘NMEA 2000 compatible’ products” and added my opinion that NMEA had a valid case. I’m pleased to report that Chetco has already acted on some of NMEA’s demands and it seems likely that their N2K gateways will be certified in due time. And I’m hoping that this entry will clear the air about what happened and why all manufacturers — and consumers — should respect the NMEA 2000 certification process…or at least frame the debate…

I’ll start with the concern that ActiveCaptain developer Jeff Siegel expressed as part of a recent Forum post. Unfortunately I felt obliged to ‘unpublish’ the post because it wandered off into strange territory (that I’m still wondering how to handle), but I think I’ve fairly edited it down to this core complaint:

I have been quite concerned with reports about cease and desist orders given to innovative small companies like Chetco by NMEA and other aggressive acts I’ve heard about. I’ve spent my entire career on the innovation side of the technology world. I know how hard it is to start with an idea and an empty basement and create a product with value from absolutely nothing. NMEA is going in the wrong direction if they don’t respect that and look for ways to work with that type of innovative entrepreneur.  ~ Jeff Siegel

The most obvious response to Jeff’s argument is that no innovator building a product on top of NMEA 2000 is starting with “absolutely nothing”; N2K is, in fact, the result of thousands of hours of largely volunteer labor contributed by members of a marine electronics trade organization that any company can join for a reasonable fee. Moreover the 2000 Standard was conceived from the beginning as copyright-protected intellectual property (IP) with fees for documentation and certification, both to avoid the compatibility issues that grew up around the unprotected 0183 standard and to provide a revenue stream to finance N2K’s management and evolution.
While Panbo has been hosting complaints about NMEA 2000 since 2005, I have to wonder if the critics have paid attention to how much NMEA has lowered the fees and otherwise eased access over the years. The table at the top is specifically about N2K gateways, but I think it’s fair to estimate the total cost for a company to join NMEA, get the proper documentation, and certify its first NMEA 2000 product at about $6,000, with the next product at about $1,000. (The major variable in either case is actually testing the product to the standard, but I know that in some cases third party companies do that for about $200.)
It’s taken a long time, but NMEA also instituted a Third Party Gateway (TPG) scheme that makes it’s even less expensive for software developers to get N2K Approval when their program is used with a certified gateway. So far only Actisense offers the hardware portion of TPG, and the Approval testing process is not quite finished, but a lot of us are already enjoying the numerous software programs that are working their way toward Approval.
Not that everything about NMEA 2000 is just ducky! Where, for instance, are the sophisticated alarm messages that I heard were written three years ago?!? I also wish that NMEA had come up with a standard way to encapsulate N2K messages (PGNs) over Ethernet before we all got so interested in mobile marine apps. Which is why I got excited when Chetco announced SeaSmart modules that include open messaging specs so that any software developer could work with them. However, I did wonder about Chetco’s status with NMEA, and asked about it when I met the principals in Ft. Lauderdale. I was told that it would cost Chetco nearly $100,000 to get all the SeaSmart modules certified, but that number turned out to be substantially exaggerated (see table above), as did their professed confusion about just how these products fit into the NMEA 2000 rules.
While it’s true that the Chetco gateways contain the same Actisense gateway chip that’s in the certified NGT-1, there’s more to the story. In fact, there are two ways to incorporate Actisense gateway technology into a hardware product. If you use Actisense’s tested and certified printed circuit board, which handles the power aspects of N2K as well as the data, NMEA understandably treats the situation differently than if you just use the Actisense chip, as Chetco does. That’s because Chetco had “to surround the OEM Actisense ARM chip on their PCB with all of the necessary NMEA 2000 circuitry in order to maintain the required isolation, plus design, manufacture and EMC test the PCB assembly.”
This may be more detail than anyone wants to know, but the point is that NMEA has good reason to want hardware certification for products like the SeaSmart modules (and note that they created a discount for cases like this where a certified OEM chip is involved). Moreover, Actisense and NMEA told Chetco all this at least a year ago — I’ve seen the correspondence.
So is NMEA stifling innovation by coming down hard on Chetco? I don’t think so. Not when it would have cost Chetco only about $15,000 to get 10 SeaSmart models fully tested and certified, and that includes joining the organization where they could be pushing to make their N2K-to-Ethernet scheme the standard. Heck, it’s my understanding that getting ten different modules CE tested — required before selling them in Europe, and elsewhere — actually would cost $100,000. Shouldn’t N2K certification have been near the top of the SeaSmart business plan?
I also think that trying to avoid NMEA 2000 fees and testing is unfair to all the companies that play by the rules, and I’ve come to see that there’s a difference between uncertified products made by companies that otherwise participate in NMEA and those that don’t. I beat on NMEA about this last year, and am still frustrated about certification snafus like daisy chaining, but now I better understand their frustration with “rogue” companies that market NMEA 2000 “compatibility” but don’t even join the organization or buy the documentation. I also question the viability of such companies, given the actual costs.
I’m sorry that Chetco is getting singled out in this entry, but that’s the way the story unfolded. The truth is that I could be writing an entry right now about how well the SeaSmart E-Net module feeds NMEA 2000 data to iNavX on my iPad — and I dare say that Jeff Siegel would have shared my enthusiasm — but it turned out that the product as it exists right now is illegal and unethical. I don’t think that NMEA deserves any blame for this situation, and I’m hoping that a happy ending is in sight.

In the meantime, I’m quite willing to host a debate on this subject, though I am going to enforce some ground rules. For instance, I will delete or edit comments that are critical of specific individuals not in the conversation (that’s always true, but it seems to come up regarding subjects like this). I also don’t want to see the discussion sidetracked by the argument that NMEA is not an open standard because it’s not free. The base definition of an open standard is one that doesn’t exclude any manufacturer — like N2K — and while “free” is common in the computer world, fees are common in the industrial world that N2K more closely resembles. In fact, I just learned recently that NMEA pays fees for the CanBus intellectual property that N2K is based on. And, please, let’s not get into how N2K should have been based on Ethernet in the first place. It wasn’t, it’s everywhere in marine electronics now, and it integrates with Ethernet in many ways; those are the facts we live with. The question is whether or not NMEA is stifling innovation related to NMEA 2000. I don’t see it, but I will listen carefully to any and all comments. 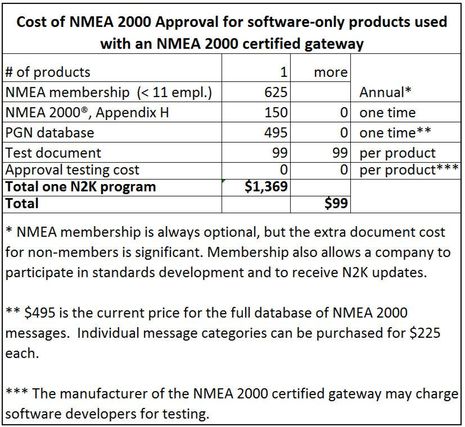