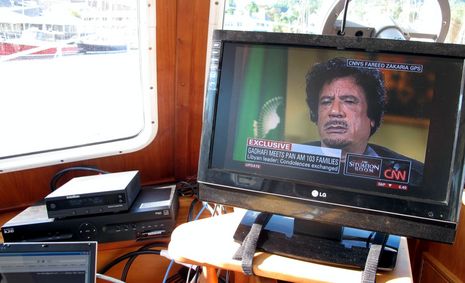 One way to know that you’re really getting high definition TV is to stumble onto a closeup of Muammar Gadhafi’s face. Holy crap, what has this guy been doing to himself?  But aside from that jolt, setting up and using Intellian’s D4 HD sat tv system went smooth and easy.  I mounted the dome on Gizmo’s boat deck, ran one coax cable to the ACU (the small box left) and one to the DirecTV receiver; ran a USB cable from ACU to receiver, and an HDMI cable from receiver to HD TV; and finally powered the former with 12v DC and the latter two with 120v AC.  After a few minutes of automatic antenna searching, holy crap I had access to some 587 channels!  (Or so the receiver claims; a lot are pay-to-view, and who’s going to count anyway?)  The amazing thing is that when I switch channels — especially between Standard and High Def — the D4 often has to switch satellites and frequencies, but it’s hardly noticeable.  The pause is about 3-5 seconds in my experience, and that’s quite a technological achievement…

DirecTV really “challenged” the relatively tiny marine stabilized antenna niche when it started moving all its HD broadcasts to new satellites using the Ka band instead of Ku. Once it figured out how to retrofit its land customers with antennas that could target multiple satellites simultaneously, and bring in the harder to catch Ka signals, it left KVH, Sea Tel, King, etc. to figure out how to make the hundreds of channels now possible work on a moving platform. It also left some boaters who had been getting HD on existing systems quite unhappy!
A year ago Intellian arrived on the scene with the first available solution, but it entailed two domes and was costly. Since then Sea Tel has introduced the DTV04 HD, but it’s a 50″ dome with DirecTV’s own house-style triple LNB antenna perched on a three axis stabilization system inside. By contrast, Intellian’s D4 is only 20″ in diameter and is built from the ground up for use on a boat. In fact it contains many of the innovations Intellian introduced in earlier domes plus a first-ever frequency switching LNB.  Navagear has some good detail on the engineering.
I further challenged the D4 by placing it on Gizmo’s extended cabin top instead of higher up with a clearer sky view.  All three of the satellites it’s using in my area are at elevations around 30 degrees, so obviously there are some headings where the mast or other gear are in the way (these are small targets).  But it works fine with the boat headed North at her float, and did fine when I cruised north in some fairly rough seas last weekend.  It did get blocked when we picked up a mooring and lay to a southerly breeze, but I just shifted the plywood platform it’s sitting on to starboard and we watched HD movies for hours. I’m going to test it more in the coming weeks, but right now am at the NMEA Conference in Florida.  News from there soon. 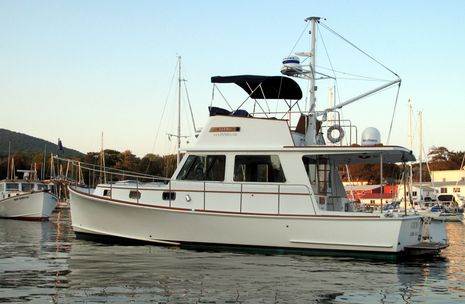