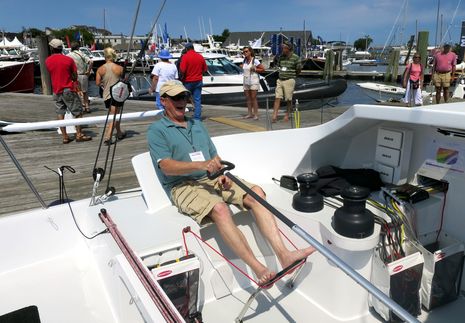 I knew I’d gotten Maine Yacht Center’s Brian Harris to photograph me in the comfortable driver’s seat he designed for the second Aklaria RC3 finished out at MYC, but how did the shot come out of my camera like this? Did I fall into some revery imagining reaching the 20 knots this exotic Open 40 racer is easily capable of? The 12th annual Maine Boats, Homes & Harbors Show was rich in the elegant lobster yachts and daysailors my state has become famous for, but there were also plenty of interesting surprises. Even Mainiac boat nuts don’t realize how versatile we are… 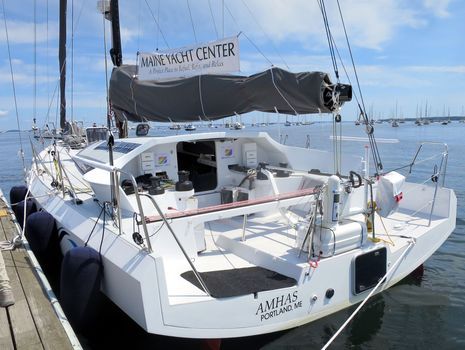 Single and/or shorthanded ocean racing remains a niche sport in North America, but it still seems weird that its current epicenter seems to be at the Maine Yacht Center just north of Portland (and nearly in the shadow of the iconic B&M Baked Bean factory). MYC, like most every yard up here, offers all sorts of storage and repair services — with Charlie Doane’s Lunacy a regular client, for instance — but it doesn’t take too many MYC blog entries to see how many extreme racers they’ve also been involved with.

The Akalaria Class 40 series is different, though. While the chief designer is in France and the hulls are built in Tunisia, MYC and particularly general manager Harris are deeply involved in the deck/cabin layout and system installs like the extensive electronics package on Amhas (and they finish out one or two new Akalarias a year). You can see what I mean by comparing my photos with the Akalaria RC3 brochure. 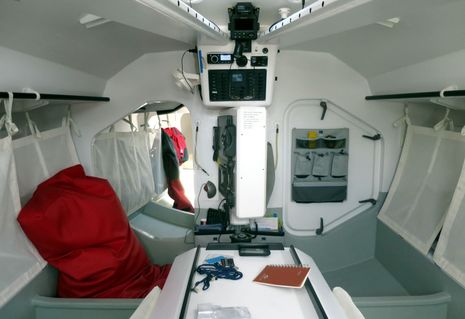 The system on Amhas is heavy on B&G, particularly H3000, like what you’ll see listed for what’s now called the Standard Akalaria Class 40. But that is a Furuno GP33 mounted up there between the internal rope and cable runs and also an Echomax active radar transponder. And there is a Zeus MFD mounted on that swiveling nav center, though Brian isn’t very pleased with it. “Too heavy,” he said, which is also why the boat is fitted with an older Navico analog radome instead of a 3G or 4G solid state unit. With the RC3 coming in at 4500 kg (9,921 lb) minimum class displacement, they’re working hard to keep her that way. Hence the all cloth pocket storage, beanbag chair/bed, and a galley that seems to be a single gas burner (and probably one aluminum pot).

Harris is also discouraged about the current state of B&G, saying he had to ship much of the gear bought in the U.S. to New Zealand to be set up properly for racing. I can imagine that there’s a tough transition going on as Navico pushes Zeus toward a wider racing/cruising market, but then again, a professional skipper who often joins racing afterguards asked me just yesterday if the H5000 start screen works as well it looks. I’m certainly no expert, but I did see it realistically and successfully demonstrated off Hawk’s Cay. I wonder if specialists like Brian will eventually be happy with H5000 and maybe Zeus, too, and I’d like to visit MYC and learn more about the electronics they use on these very demanding boats. 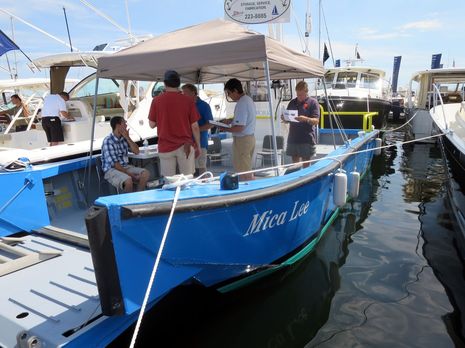 If the fit and finish of the utilitarian (in its own way) Akalaria RC3 was well beyond “good enough”, ditto for the sharp aluminum workboat being shown off by Dock Works of Winterport, Maine. Unfortunately, there’s no detail about this 26-foot power catamaran on their website yet, but I can assure you that I’m not the only recreational boater who daydreamed about skipping around the coast at 30 knots — hull #1 Mica Lee has twin Volvo Penta 225hp diesel outdrives — with maybe a picnic table, tender and bikes on the work deck. In fact, that’s my buddy Peter Smith checking out the price list, and he came away so bug-eyed I think I’ll let Dock Works reconsider before I suggest how relatively easy it is to own this able vessel. 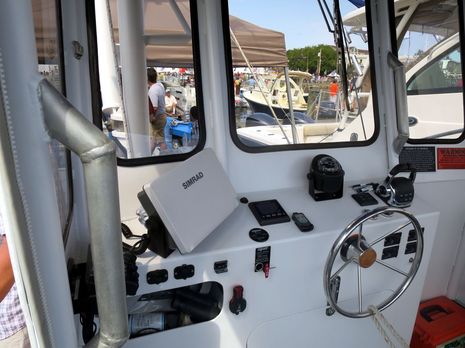 One of Dock Work’s main products is custom aluminum ramps, and you can see how neatly this expertise worked out in the power cat’s wheelhouse. Incidentally, that wireless remote next to the wheel runs the landing-craft-style bow ramp/door so this boat can be single-handed if desired. I gathered that the company will use Mica Lee to deliver and install ramps and floats, but I can picture island building contractors, mooring tenders, marine scientists, and many others lusting for the cat’s speed and versatility. Dock Works hopes to sell a few around Maine and then further afield, and I think they may succeed. 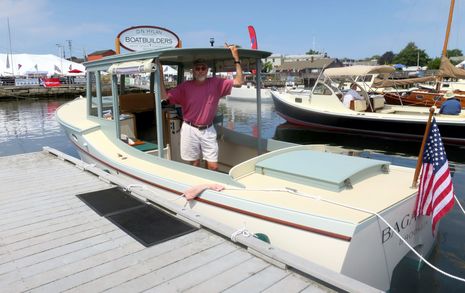 Bless my eclectic boating heart, I can also picture myself happily tooling around on this stylish weekender designed, built and displayed by the venerable Doug Hylan. There’s actually a practical and fairly efficient 60hp Evinrude E-Tec outboard mounted under that hatch and Doug used sheathed strip planking and a cored foredeck to keep more traditional wooden boat structure from eating away at the interior spaces. 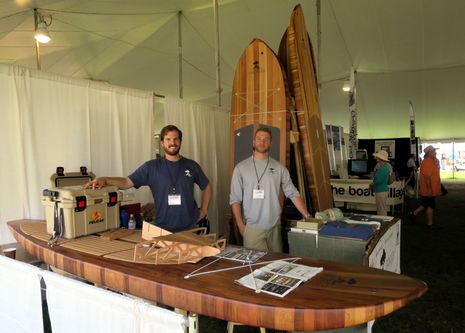 I’ve only tried stand up paddling (SUP) once so far, but I understand why it’s become so popular and was pleased to see that a couple of Maine lads are building them handsomely in wood. They do business as Tidal Roots and they aren’t just applying veneers to a foam core, as you can see in the foreground example of the internal framing. When I worked at Woodenboat School in the 80’s I got to use a wooden windsurfer and can testify that there was something special about its feel and how it looked below my feet as I flew along. 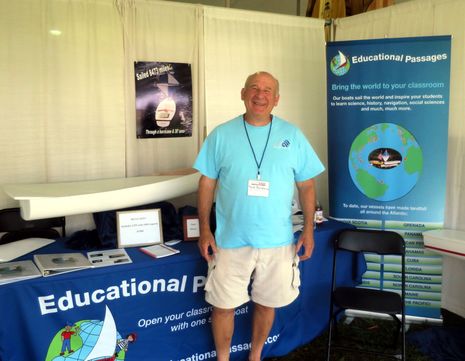 Another very different sort of vessel is the little unmanned satellite-connected bluewater sailboat that Educational Passages offers to schools to help with ocean science awareness. I wrote about the program in 2009 but first met solo circumnavigator and the non-profit’s founder, Dick Baldwin, on Sunday at the show. It was fun to hear about how far some of the boats have meandered and how often they’ve been relaunched by friendly foreigners. Dick described the excitement after school announcements of a transatlantic completed or similar milestones, and it seemed obvious that his infectious enthusiasm is key to the program’s durability. 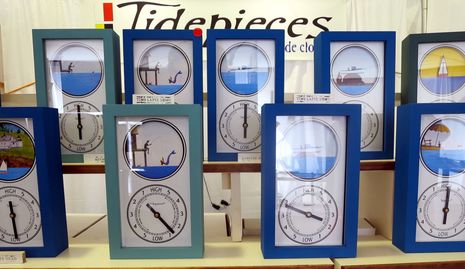 Of course, I’ve skipped a lot of handsome and beautifully crafted Maine-built boats in favor of the more unusual sights at the 2014 MBHH Show and also many interesting exhibits in the tents. But I will close with one neat gadget I’d never seen before. Tidepieces aren’t just tide clocks with a clever illustration added; the water level “in” the illustration raises and lowers with the real tide level as nicely shown in this video.

Finally, I missed photographing that young boater up in the wheelhouse of the CedarWorks play boat intently steering somewhere. But I did get to see him use the unusual exit with good form and then decorate the craft’s bow with a small flag he found somewhere. I don’t know him but sensed that he’s well along a good path. And what he doesn’t know yet — a happy truth that came up with friends at the show — is that youthful boating enthusiam can last for a very, very long time. 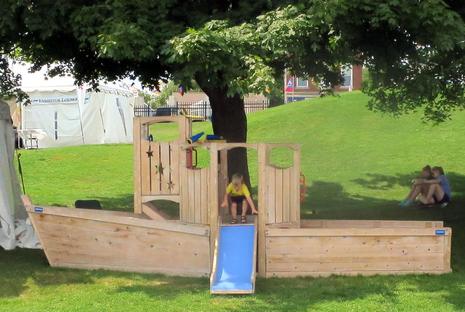