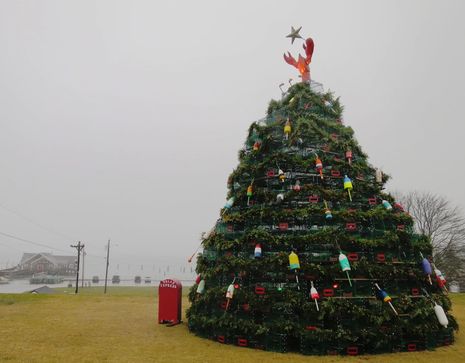 I hope that Panbo readers everywhere enjoyed Hanukkah, the winter solstice, Christmas and/or any other way you celebrate the holiday season. We deserve all the light and cheer we can find, especially when the shortest days are as dreary as they were here on the coast of Maine this year. Instead of cold gray drizzle, my almost-Christmas-eve photo above might have shown sparkly snow highlighting the Rockland Public Landing and the islands across the Bay, but, hey, our area does lay claim to the “World’s Largest Lobster Trap Tree“… 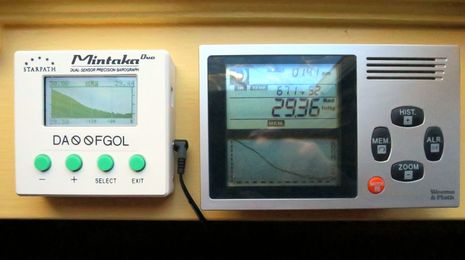 This photo taken Christmas afternoon tells more of the weather story. While the new Starpath Mintaka Duo barograph doesn’t agree about the exact pressure with the Weems & Plath model I’m also testing, both their 24-hour graphs illustrate the fairly steep low that unkindly coincided with the holiday. But I’m learning to appreciate the value of a recording barometer again and will post a comparative review soon. (Incidentally, attendees of my all-day Trawlerfest “Soup-to-Nuts” nav seminar on January 21st in hopefully sunny Riviera Beach, Florida, will get some nice chart tools, thanks to generous Weems & Plath sponsorship.) 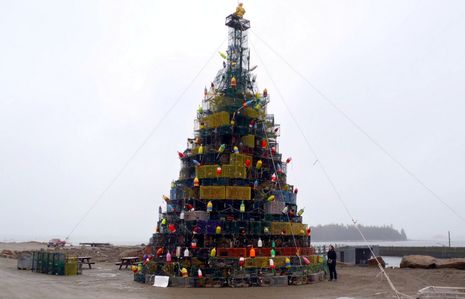 Meanwhile, I had plenty of indoor time to explore the somewhat wild world of lobster trap Christmas trees. It seems that Rockland’s “World’s Largest” claim may be off base at 35 feet, or at least it was in 2010 when Beals Island put up this monster. In fact, the next year Beals and neighboring Jonesport went even bigger, stacking 1,364 traps 60 feet high, and both the Bangor Daily and the New York Times covered the “friendly competition”. I don’t know if those way-Downeast lobstering towns have maintained their stride, but it seems that Gloucester had a 45-foot tree last year and while the Provincetown Lobster Pot Tree doesn’t look as large, it does have its own Facebook page. 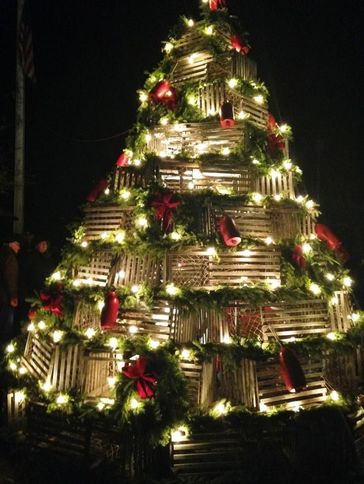 It turns out that there are many ways to style a lobster trap Christmas tree. I’m particularly fond of ones that use the now antique bowed oak traps, like this Cape Porpoise creation I found on A Traveler’s Photo Journal. But our local Rockland tree remains a pleasure of the season, and I applaud everyone who brings light and fun to the long nights. 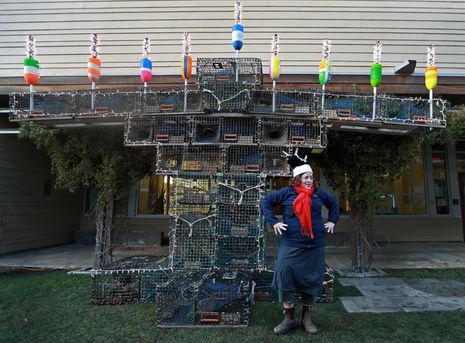 I’m also enthused about Gloucester’s new lobster trap menorah, which may be a first. We’ve celebrated Hanukkah in my household for decades, but it took on new meaning when I discovered that my own DNA is almost 25% Ashkenazi Jew. We all joined the 23andMe DNA program long ago, mainly because a family member works there, and both the medical and geneological information has been interesting. But it was a real surprise when the 23andMe researchers decided they had enough data to identify ancestral origins. 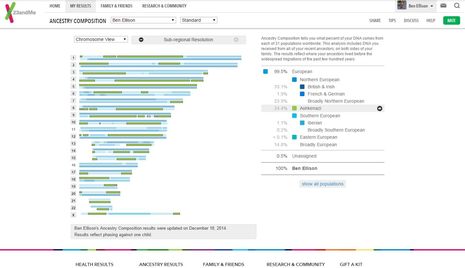 I thought that I knew a lot about my seemingly 100% WASP heritage, but the graphic above shows how almost every one of my chromosome pairs contains Ashkenazi DNA. The fact that it’s just in one of each pair indicates that it’s all from one parent and its presence in my X chromosome means that the parent was my mom. Beyond that is a fascinating mystery for me. I’m trying to solve it via traditional geneology, which has become amazing in our connected world, but the possible secret in my family past may only get solved with DNA matches. As a good friend likes to say, “Don’t believe everything you think!”

Incidentally, I have very high confidence in the 23andMe analysis because my daughter’s screen shows about 12% Ashkenazi, my Jewish second wife about 98%, my stepdaughter 49%, and my stepson 49% with his X chromosome indicating it all came from his mom. The science doesn’t factor in relationships, but this all makes total sense, apart from the mystery on my side. The cool part is that my daughter and I feel like we’re more connected to a bigger world than we thought we were, and even closer to the extended Ashkenazi family we already felt close to. DNA is certainly an interesting technology, but be aware that another possible outcome is sometimes phrased as: “My daddy’s not my daddy!” 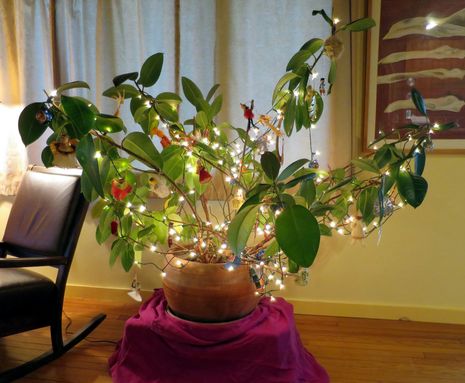 OK, so I’m probably writing the most off-topic Panbo entry ever, and I may as well conclude with the photos of our home’s traditional rubber plant Christmas tree and the magnificent light beams that emanate from our granddaughters a block away. I wish you all a new year full of gorgeous clear high pressure systems and light of every sort. May you enjoy lobster trap Christmas trees and may any DNA surprises be as pleasant as mine. Regular marine electronics content will resume shortly. 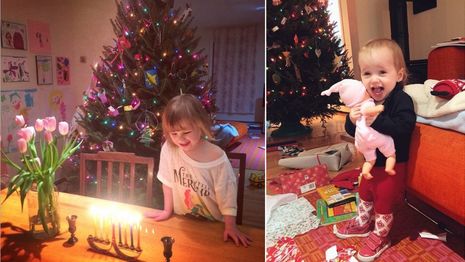