Once again — and a nice contrast to my various METS ramblings — the good Kees Verrujit kindly wrote up his impressions of the huge Amsterdam marine equipment trade show:

Today I visited METS for the fourth year in a row. This year the show was even bigger than last year, by about 20%. Anyone who still claims they can do all halls and booths on one day is a close relation of Baron Münchhausen. I visited some booths as a NMEA 2000 enthusiast, some in my role of technologist for a yard, but most in my role as a delegated Panbo blogger. This year that was a lot easier than last, as more and more people seem to read Panbo or at least know Ben’s name — most vividly portrayed by a huge quote sign in the Fusion Marine Audio booth {like this one, only bigger!}.  The major themes I noticed were: Pads (and iOS apps) were everywhere; AIS is taking off in a major way; Chinese electronics are coming; and
NMEA 2000 is here to stay…

iPads (and iOS apps) were everywhere

It would have been hard not to notice how many companies are jumping on the iOS bandwagon. This makes sense — iPads, iPod touches and iPhones are being sold at a high rate, there’s only a limited amount of different devices that you need to program for, there is a great ‘free’ development environment (Xcode). iPads were out in force, as Ben correctly predicted, in use for pretty much anything. Slideshows on big screens, showing off the company apps, checking email, etc.
What I like about this trend towards using “off the shelf” devices is that it levels the playing field for the small companies to some degree. Not having to develop the hardware and having a very low price to entry to getting an iOS app running allowed several small new companies — like SeaZone, seen below — that I talked to at the show to develop a great looking and very functional user interface. AIS is taking off in a major way

This year there were a number of innovations taking place in the AIS market, as well as increased competition. Several companies were showing AIS SART devices that Ben first reported on in March regarding the Jotron AIS SART. A normal Search And Rescue Transponder is quite a large device that serves as a radar beacon. Since it is radar based a SART requires active reading of a radar screen on ships in the vicinity. Thus it is a good way to locate you when the SAR comes to your rescue, but not a good way to alert people that happen to be in the neighborhood that you are in need of rescue. An AIS SART is more like a VHF version of an EPIRB: it will acquire a position from the built-in GPS and send this message out once every minute. This has the advantage that (a) the position is completely clear, (b) the message tells the receiver who you are (MMSI), (c) all AIS displays in the neighborhood will actively warn the operator that someone needs rescuing.
I like these new AIS SARTs a lot. They form a good addition to an EPIRB: a self contained device that will work even if you need to step up into the raft. The smaller ones that are intended for carrying in your personal gear seem to make the most sense. Unlike a PLB the equipment to locate you can be on the vessel carrying you — a simple AIS receiver will do. This makes it feasible to be used as a man overboard device. Unlike the wrist-band solutions such as the Raymarine Lifetag that rely on breaking an active network connection the AIS SART only activates when it is in the water. Thus its battery only needs to be replaced every so many years. More importantly, all ships in the vicinity equipped with AIS can participate in the search.
The German firm Weatherdock AG was showing their extended range of AIS products produced under the EasyAIS brand. They are launching a new “easyTRX 2” AIS Class B transceiver that adds a number of new features, such as logging all AIS messages to an SD card and a direct USB interface for a PC. Already on the market are a separate “easyN2Konnect” HS0183-AIS to NMEA 2000 converter (that only does AIS, not all NMEA-0183 messages) and automatic and manual versions of quite light and portable AIS SARTs. A newcomer to the AIS market is ExNc from Austria. Formed out of former employees of Nauticast (which was acquired by ACR) that created AIS class A products, they are actually developing Class B AIS products from the ground up. They do not rely on the SRT product that most manufacturers rely on — even Weatherdock seems to use the SRT board in their transmitter. This is a very good development, as in the current crop of AIS Class B transmitters there is not much difference between them. What was particularly impressive is that ExNc is already developing a second generation product, a few months after their first product hit the market. Where the first generation transceiver was already half the size of the SRT devices, the new one is half the size of a credit card, as seen above. In that image you can also see their new AIS Class B receiver packaged in the form of a USB stick. Very small, and ideal for use with a laptop. Their new transceiver board is to the right. It will not only be small but also use less power than the previous one — which was already using less power than the SRT board.
ExNc is supplying the AIS technology for SeaTraq, who have packaged the AIS module into a free-floating buoy that is meant for smaller vessels that have limited or no power available. The AIS buoy contains a sizable battery so that it can power the AIS transmitter for a few days. If the boat sinks or you drop the AIS buoy in water it will automatically switch to SART mode and start asking for help: This year there were not only more Chinese manufacturers but they also had a wider product range. Not just relegated to last year’s stainless bobs and bits, I also saw several showing more complex products such as electric pumps and even MFDs! I don’t think they understand product design yet, or intellectual property law. For example look at this: I must admit that I am a little confused by this Techmarine brand. There is a close relationship to Seiwa, who have always produced original products. But some of the Techmarine displays that I saw looked a lot like previous generation Raymarine plotters. Another example where it was even clearer which company was the inspiration (and probably more) for the product on show was the pump manufacturer seen below. Let’s hope that they soon learn their lesson when we refuse to buy
shameless copies! I also hope that the manufacturers that outsource
their manufacturing take a firm stand against these practices. It is now completely obvious that NMEA 2000 is here to stay, and has won. With the bigger manufacturers the most obvious sign of this is that they no longer have big displays showing off how the networking works. It is now a given, nobody needs to be told anymore. They’ve all gone back competing on different areas. The most upbeat of the “big four” (Furuno, Garmin, Navico and Raymarine) was Garmin. They didn’t have a lot of new products to show, aside from the new fresh water fishfinders, but it was my first chance to see their autopilots and the GPSMAP 700 series. That last little device really was impressive. Apparently Garmin has been pleased as well, they sold 7000 units in the first three months of its availability in Europe. That’s a lot in this market. The 700 series looks to me like the ideal secondary plotter at a helm on a bigger sailing boat (where helm space is often extremely limited) or primary plotter on smaller motor and sailing boat. The user interface made the most of the somewhat small screen, with easy navigation down the menu choices. They are also starting to take sailors into account, for instance with a wind page on the 700 series.
I spent a big part of the day talking to various companies producing networked power distribution solutions. Of those I talked to all used CAN, with some going for non-NMEA 2000 and others going for NMEA 2000. It looks as if NMEA 2000 will win out here as well. Most shared my feeling that the way the standard is being managed (both in terms of price of entry and how new extensions are being handled) is a big hindrance. In fact some confirmed that it was just too expensive for them as a new manufacturer to go with NMEA 2000. Most were very eager to open up their CAN networking to outsiders, so that other parties can interface with their power nodes and/or displays. I must confess it was so busy at the Maretron stand that I missed the opportunity to remotely co-control the boat that Ben was messing with!  As they are well covered here I felt I couldn’t add much news, same for most of the DAME award winners or nominees.

However, there were a few entries for the DAME awards that I saw discussed here on Panbo that I was intrigued with so I paid them a visit. The CMI compass that Ben reported being confused about earlier was indeed what I thought it was: meant for bigger yachts. It requires a primary source of heading data such as a GPS compass or a (real) gyro compass, and a magnetic compass. As long as the primary source is functional it updates the deviation table for the magnetic compass. You can use the CMI computer as the heading source, in which case you can easily switch between heading sources on the CMI screen: GPS, Gyro, Magnetic. If one of the primary sources fails you can continue navigation with the magnetic compass with an up-to-date deviation table. For bigger yachts this means that the crew no longer needs to spend time swinging the compass, as the master can sign off on the CMI deviation table. The product is not meant for smaller boats, obviously!
The Whale “Intelligent Control” pumps were very interesting. They have invented a “third way” of regulating water flow so that tap water doesn’t pulse. Until now you either had a variable speed pump or a normal on/off pump with a pressure tank. Their new IC pumps have a tiny bit of electronics that does a soft-on and soft-off regulation, and a timer that delays switch-off. To regulate pressure it also includes a feedback valve that relieves pressure when the flow is low. So when you open the tap the pump starts, and then doesn’t switch off until a few seconds after the tap is closed (and dynamic pressure remains constantly high). When you use only a little bit, pressure stays high and the relief valve feeds water back inside the pump. So you lose a bit of efficiency in the pumping action, but on the plus side you have a simple pump that does not need the complexity of a variable speed pump. I do hope that the phrase “they have a mind of their own” shown in the picture below doesn’t come back to haunt them! And with that, my friends, I close for my report of this year’s METS.

A big thanks to Kees, who is also doing good work at his own blog, Yacht Electronics, and no doubt at his marine consultancy, Keversoft.  I’m worried, though, that he might be around for METS 2011, because his absolutely lovely Stadship 56 Merrimac looks ready to rock. 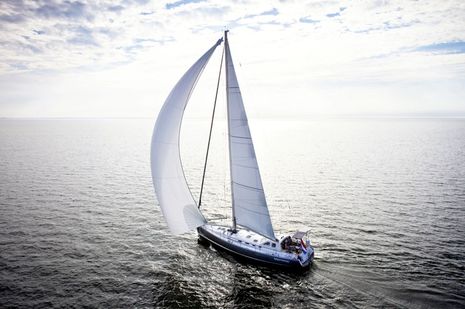