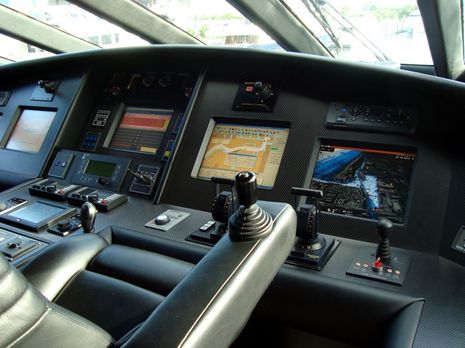 While at FLIBS, I had the pleasure of meeting Mike Spyros, Director of Service & Technical Development for Electronics Unlimited.  Per usual, I invited Mike to send in details of a notable install (an open invitation, incidentally), and by golly he did, and she’s a corker.  The 116-foot M/Y Moonraker might have been built in 1992, but is still claimed to be the world’s fastest mega-yacht, with a cruise speed of 28 knots. And I think the electronics makeover Mike and his team did last year is an interesting example of how familiar smaller boat brands and NMEA 2000 can be used to manage even a giant jetski…

Yes, those displays above are showing Nobeltec Admiral and Furuno NavNet3D, and to the left of the big Ka Me Wa jet drive controls is a Ray gray keypad for running the twin Raymarine ST70+ instrument displays up above the helm.  There’s also a Garmin 5208 somewhere outside the picture for more backup navigation and backup SOG to the Anschütz PilotstarD (which is more typical of megayacht electronics).
And all the familiar stuff is getting sensor input from a fairly conventional NMEA 2000 backbone.  It only uses micro size cabling, in fact, though it’s 89 meters long with 34 meters of drop cables attached.  That’s possible largely because of careful power supply design.
Mike kindly sent along the N2KBuilder file that documents Moonraker’s sensor system and on the screen below (click on it!) you can see how he not only used a split powertap to minimize voltage drops, but two of them (breaking the backbone’s positive 12v power wire at the console) along with a DC-DC 13.6v supply for even better amperage distribution.  Thanks to N2KBuilder — which is getting better and better — I can see that the worse case extremity of this network, the Bennett/Lowrance trim tab sensor, is still getting 12.1 volts. In other words, there’s plenty of room for growth… 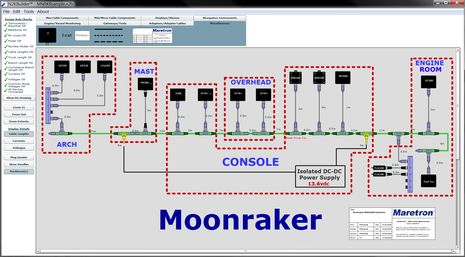 You might also notice on the diagram that Moonraker is equipped with an Airmar PB200, which was discussed yesterday and can be seen on cabin top mast below, just above a FLIR M-Series thermal camera.  (By the way, you can see in the helm shot at top that both navigator and helmsman have controls for that camera, and for many other tools, which makes sense when you’re going that fast in such a large vessel.)  Oh, and the custom painted open array radars are Furuno DRS 25a (25Kw) models and Moonraker also has twin DFF sounders with transducers fore and aft.
Of course I asked Mike if he’d gotten out in this beast and his reply goes like this: “Yes, several sea trials. Pretty
cool ride, trim tabs are 10’x4′ so when he puts them up over 50%
the boat actually pulls a wheelie!”  A big thanks to Mike Spyros and Electronics Unlimited, and to Glen Ersly, who made the introduction and was also the guy who shared his testing of the SmartCraft-to-NMEA 2000 gateway. 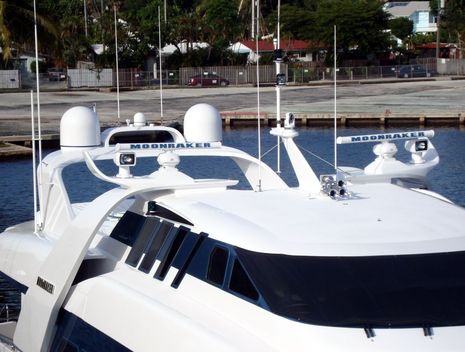