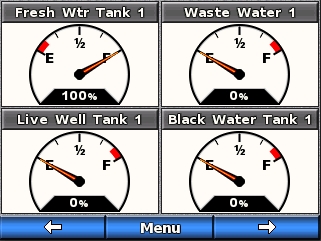 I just recently realized that Garmin has developed five analog-to-NMEA2000 adapters — the GRA 10 Rudder Angle Adapter, the GST 10 Water Speed and Temperature Adapter, the GFL 10 Fluid Level Adapter, the GET 10 Engine Tilt Adapter, and the GBT 10 Bennett Trim Tab Adapter. They each cost $199, which seems a little stiff, but then again they seem quite able at getting sensor systems you may already have onto an N2K backbone for display, or use in calculations…

The fluid level adapter, for instance, seems able to automatically detect several kinds of sensors and gauges (which you can keep using if you want), can be calibrated to odd shaped tanks, and supports the standard N2K Fluid Types (as suggested on the GMI 10 screen above) and multiple tanks of any fluid type.  Maretron’s TLA100 (tested here) can do the same thing, mind you, but the more the merrier, and besides Garmin has three adapters Maretron doesn’t.
Then there’s the calibration issue, which we know must usually be done with a same brand display (and ditto with firmware updates).  So if you have a Garmin MFD or GMI 10 instrument on board, you just may want to go with Garmin adapters. I dare guess that the calibration routines on either are easy and elegant.  But interestingly, the Garmin adapter manuals (down-loadable here) describe an alternate ‘generic’ calibration routine in case your Garmin display’s software hasn’t yet been updated with the specific routine. The manual section below describes this generic calibration for the rudder angle sensor. It’s a simple command line process that makes me wonder if another developer might be able to implement it. For instance, could someone like Nick White write a routine into Expedition so that you could not only get data from an existing Airmar ST850 speed/temp transducer (one of the ones Garmin’s adapter supports) but also calibrate it?  I don’t know the answer, but I’m curious.
Garmin, incidentally, now has more certified NMEA 2000 products — with 60 — than any other company besides Maretron, which has 115.  But I’m beginning to realize that the certification process may be overly strict in some cases, which I’ll discuss next week. 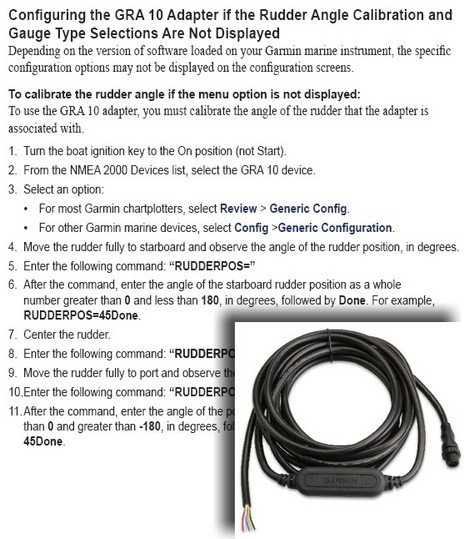