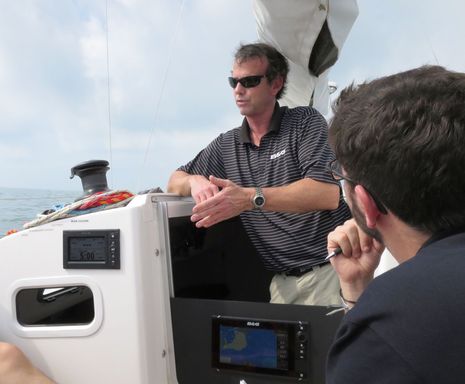 Navico did it again, even better than last time. The company gathered 24 boating writers at the Hawk’s Cay Resort along with a deep roster of Lowrance, Simrad, and B&G product experts and 9 demo boats loaded with gear. The demos very much reflected the refocused brand identities we learned about last year in Las Palmas, and in some cases the Navico team went some extra distance to make them real. Thus, I found myself not only sailing on a nearly new J/111 with B&G’s long-time Race Specialist Matt Fries, but actually pinging start line buoys and later working our way to the windward mark… 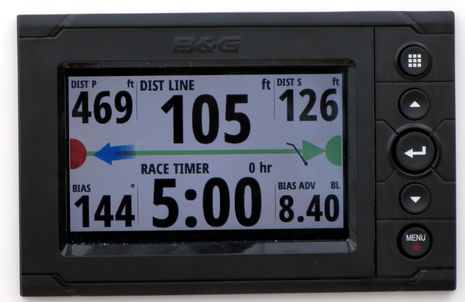 My Sail magazine colleague, Charlie Doane, has covered this same demo in great detail — actually, the whole event with “Hax and Flax” hilarity — so I get to chime in with some nuances. Charlie, for instance, explains what’s happening on this amazing start line screen, including the calculated bias advantage in boat lengths to crossing at the starboard pin (which might also be viewed as the speed you’d need to make up if you decide to blast through a hole toward the port end). But I learned a couple of things about the bigger picture.
For one thing, this H5000 graphic display is probably the first to show such a sophisticated start screen, which used to be the province of high-end PC racing software like B&G’s Deckman. But while the graphic display apparently has enough processor to run the same NOS (Navico Operation System, a special flavor of Linux) as the Zeus2 MFD cleverly mounted in the J111’s companionway, it can not do the Start Screen without an H5000 CPU working in the background. On the other hand, and in keeping with B&G’s desire to attract club sailors and even cruisers, the graphic display can work fine as just an especially large, bright and fast NMEA 2000 instrument display. Hence, a production builder can easily install a graphic display and tell customers that if they get serious about racing they can simply add the CPU to get the start line screen and other advantages. Let’s also note that a Navico user can get somewhat similar racing aid from third party apps like iRegatta that can use the generous data flow emanating from a GoFree Wifi1. 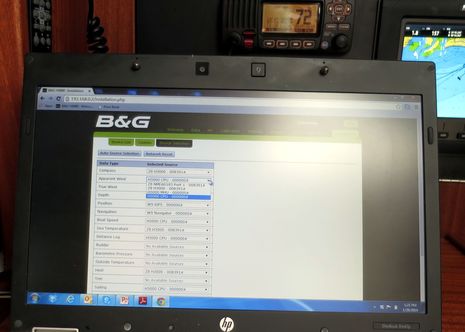 Sailors should check out the SailSteer and layline overlays that Charlie was impressed with (me too) as well as Kees’ H5000 overview on Panbo. But yours truly was willing to go below for a live view of the H5000 web interface in action. I failed to photograph the neat sensor calibration tables and curves it lets you make, but this picture shows how deep the data sourcing is. It’s sort of like NMEA 2000 when it’s done right and you can choose between, say, port and starboard depth transducers or even show both. But the H5000 lets you choose data before or after it’s massaged by the CPU and even apply logic like “if on starboard tack use port speedo.”
I also enjoyed hearing product manager Robert Langford-Wood describe the delight of the B&G programmers when the decision was made to manage the H5000 processor via a built-in web server instead of trying to squeeze it into even the powerful graphic display. It looks like the smart future to me, too. 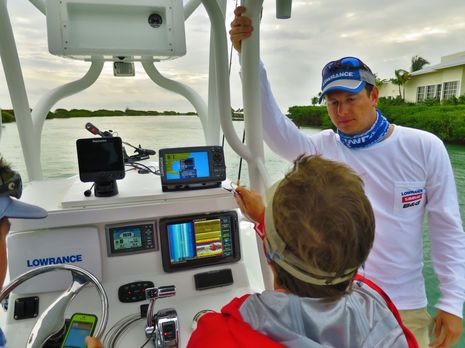 It was indeed a change of pace and brand identity to almost go fishing with Lowrance’s Lucas Stewart, who is fairly famous here for his tricked-out kayak and his manly StructureScan HD transducer (we had the rods but not the time). He showed us a nice advance in sonar that unfortunately, we can’t share for several weeks, but that is indeed a competitor’s sonar product mounted on the dash of this 24-foot Yellowfin Bay Boat (with mini flybridge)… 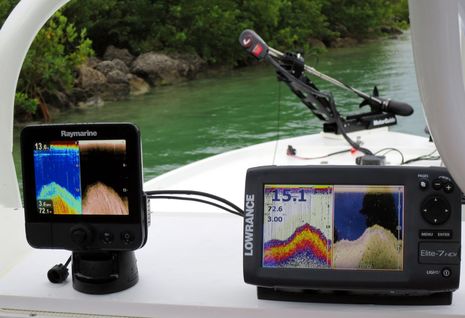 Stewart wanted to make the point that higher frequency Lowrance DownScan yields more detailed information including a deeper bottom profile than the CHIRP-assisted downscan seen on Raymarine’s Dragonfly. But I was confused, because this Dragonfly imagery didn’t seem nearly as detailed as what I saw demoed in Miami last year. But apparently, I’m going to see a new Dragonfly demo next week in Miami and the downscan/sidescan wars are cranking up to a fever pitch, which strikes me as great for everyone, with the possible exception of the manufacturers. And note the Motor Guide trolling motor on the bow with a vaguely visible hose clamp holding something to the motor. 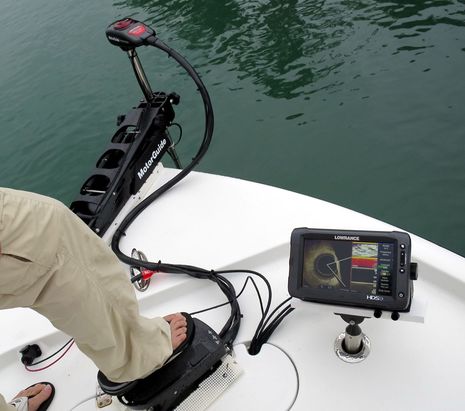 This is SpotlightScan Sonar, Lowrance’s response to Humminbird 360 Imaging. I had just seen 360 in action a few weeks before on a lake in Alabama and had gotten how it works in conjunction with regular cruise and side imaging. You use those technologies to find the fish or the structure they like and then 360 for the stopped or slow final hunt. SpotlightScan can’t do all that 360 can with its independent mount and scanning motor, but it seems like a darned smart way to get a similar result with less cost and less hardware to go wrong.
Besides the transducer clamped to the trolling motor, there’s really just an NMEA 2000 position sensor (quite like a rudder angle sensor) you have to attach to the underside of the trolling motor foot pedal control. (Lowrance even provides instructions for how to install one in the pedal of a Minn Kota, Humminbird’s sibling company). Then the fisherman controls his own scan, either with the boat at rest or with the motor pulling the bow around. It seemed quite effective in the shallow water where we tried it, and especially intimate when Stewart spotted a fish and then homed in on it with slow prop turns. 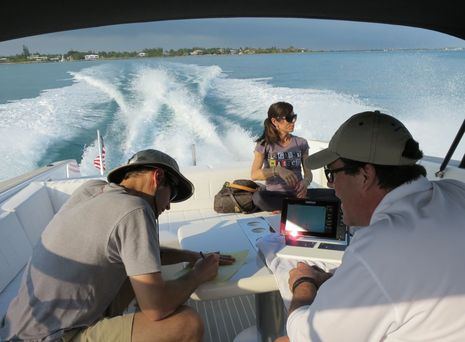 It was also fun to blast around on a VanDutch 30 with Simrad maven Mike Fargo who first showed me the NSS in Palma, Spain. Of course the thing now is the new line of NSS Evo2 MFDs that essentially replaces both the NSS Sport and the NSE, and also the all new “Heroic” software interface that’s sort of played second fiddle to the hardware introduction… 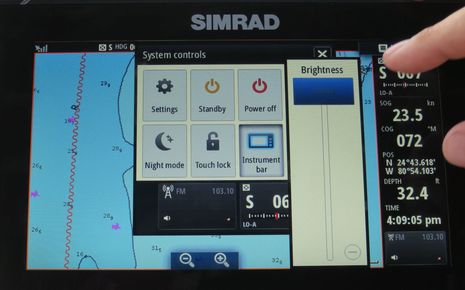 It looks good. That “system controls” dialog box swipes down from the top of any screen and you can see how the new autopilot and audio widgets can appear there and/or in the Instrument bar at right. 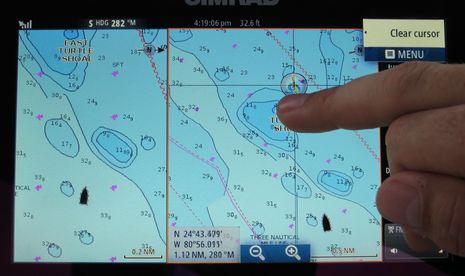 I also liked how a long touch puts the magnifying glass cursor in sight above your finger, so you can place it with great precision. Window sizes are also adjustable horizontally and vertically, a nuance I liked a lot on the NSE and missed on the NSS. 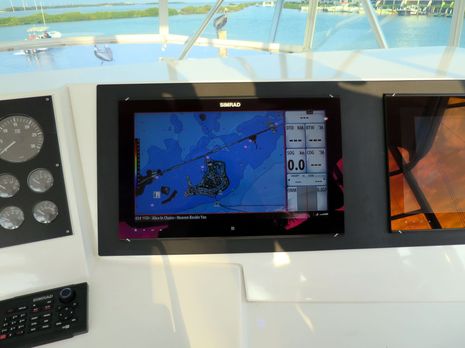 I didn’t get out on the Viking 50 sportfish Tailwalker2, but I did get a peek at her new NSO evo2 system. Twin OP40 control pads manage the twin MO19-P monitors (that will soon be replaced by the 3X brighter touchscreen models that are about to ship). NSO is also running the new interface, and this dual-processor black box system figures largely in Simrad’s ambition to “crush” the megayacht electronics market and make a big splash on the commercial marine scene. But that’s a story for another day, probably after Miami, where Navico will be generating new stories. As much as I learned while boating around Duck Key — somehow home of Hawk’s Cay, and shown with my trusty inReach SE 10 minute satellite tracking below — I may have learned more from the Navico presentations and some solid face time with upper management. 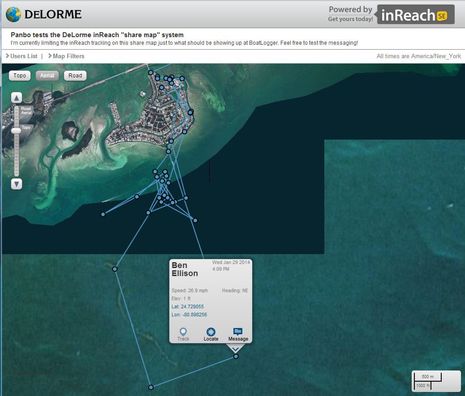