Sigh, that’s my first NMEA 2000 network, circa Spring 2005, when there wasn’t much more than Maretron to hang on it, and not many boaters were interested anyway.  Now many more N2K devices have joined these on the lab’s snaking backbone (and there are many others I’d like to try), N2K is an active topic on Panbo forums and elsewhere, and the network for my maybe-new Gizmo boat is going to be a serious undertaking.  The Standard has come a long way, and methinks it’s time to reveal a little drama that went down along the way. Yes, those gray Micro cables and the yellow powertap did incur drama, even soap opera…

It was at METS in 2006 when someone involved with ABYC said to me, “So, I hear the U.S. Coast Guard has a problem with NMEA 2000!”  That was news to me, especially as I knew that the USCG research division had played a significant part in creating the N2K Standard and was darn bullish on its promise of more reliable, and hence safer, systems.  But, in fact, there was a little problem in the form of USCG 33CFR 183.425, a very old regulation which states that no power wire shall be less than 18 AWG gauge on a vessel with an inboard gasoline engine. The power (and data) wires in N2K Micro size, or ‘light’, cable are 22 AWG.
Nevermind that the DeviceNet cabling system — which NMEA borrowed — is safely used in similar ways all over the planet, nevermind that these standards carefully delineate proper usage to avoid significant voltage drops (and related cable heat), and nevermind that cables are better than they used to be…the ABYC had “concerns” about “violating” the old CFR. I participated in some group email conversations that were darn antagonistic, and can tell you that in 2007 — when major manufacturers like Garmin and Lowrance were already shipping thousands of devices designed for N2K light cable — certain members of ABYC were suggesting that it would be “easy” to simply remove the power wires from the the cable design.  I got the distinct impression that the whole kerfufel was more about petulance (“hey, we’re the power standards people”) than safety.
But the USCG — though willing to state that N2K light cable poses “no significant safety risk” — could not push the bureaucratic stone far enough to actually update the CFR.  Thus NMEA ended up issuing a rather odd press release (PDF here) stating that while they’d proven light cable’s safety beyond a doubt, they’d help builders of gasoline inboard boats apply for a waiver.  I understand that to date no builder has, and meanwhile the NMEA 2000 standard has been approved by Lloyd’s Register and other strict international standards organizations.
So the “CFR problem” doesn’t seem to be a real problem. There are now lots of N2K light cable networks out there and I’ve never heard of melting cables or anything of the sort. BUT, in fact, 22 AWG wire is thin stuff to run much amperage through and voltage drops can cause network performance issues. Once an N2K network goes beyond small and simple, its designer really should pay attention to cable specs and powertap possibilities, the subject of a future Part 2 entry. Til then, this entry (plus this explanation at Blue Heron Marine) should help clarify the value of Maretron’s new Mid cable, whose 16 AWG power wires are diagramed below. 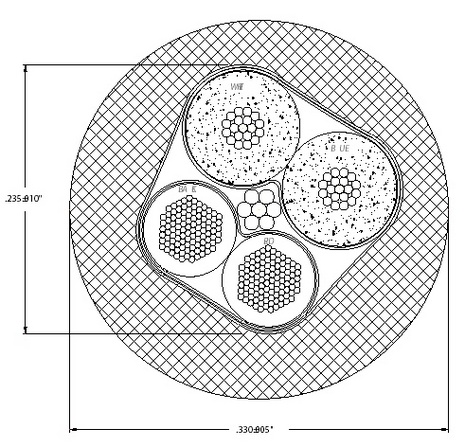