NOAA shoreline doubts, or how NE Pt became an island

Yet another blizzard is descending on Panbo HQ, and that’s excuse enough to further indulge my obsession with local charting, specifically the issue mentioned on Monday about how Northeast Point became an island.  It may be a trivial matter, but it does illustrate some technology NOAA is using these days, and perhaps why we should be skeptical about the results.  The collage above shows how the Point’s shoreline has been depicted on the paper/raster version of chart 13307 for more than a century; the infrared aerial photograph, carefully taken near the time of mean high water, purportedly shows the actual shoreline; and the new vector version of 13307 shows how that recently acquired shoreline data was applied.  The trouble is that some rocky reality seems to have been left out of the picture!… 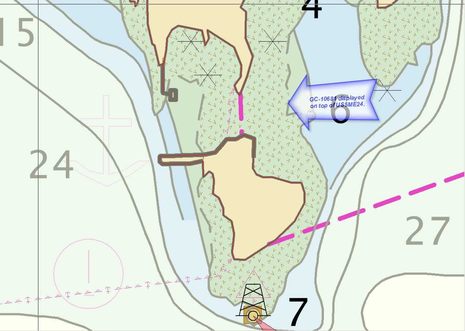 During the course of a long email conversation about Camden chart detail last summer, NOAA sent me the screenshot above, which apparently shows how the infrared photo data — known as a GC, or geographic cell — is overlaid onto data derived from the original raster chart as a new vector ENC is created. Interestingly, infrared data for the mean lower low tide line has also been captured in some places, though it’s only represented here and on current ENC’s by a dashed line.  It shows, for instance, how the area between the breakwater and dock above has been dredged.  I’m told that NOAA has gained enough confidence about this data that they have started using it to draw new MLLW lines.  I agree that the dashed line above is closer to reality than the charted low tide line, which is also true around the Wayfarer Marina docks also freshly charted on ENC 13307.  But when NOAA said they were also quite confident that the neck to Northeast Point covers at high tide, I was enough of an old goat to go out there aboard Gizmo and take pictures:

I think it’s neat that the new chart now accurately depicts that granite breakwater along with the dock and even the float, but I don’t think the infrared photography properly captured the actual high tide topography of the neck. The photos above show what it looks like at about MHW from inside the harbor (while this week’s header photo shows it from outside the harbor).  Along with the low tide Google Earth satellite photo below, you can see that, in fact, neither charted shoreline gets it quite right.  The actual neck is more broken up than the original raster chart indicates, but a lot less cored than the new chart suggests…so not covered that even kayaks don’t attempt to go over it.  But don’t you wonder what other large dry ledges the (probably expensive) IR aerial photography may have missed?
At any rate, while NOAA did fix some of the dock mistakes I identified in the Inner Harbor, my photographs did not persuade them to veer from the infrared shoreline methodology.  In fact, as noted on Monday, the new 1:40,000 scale raster chart 13305 has Northeast Pt. as a high tide island, and I imagine all NOAA’s chart will eventually, and possibly all the commercial charts (do they have a real choice?)… 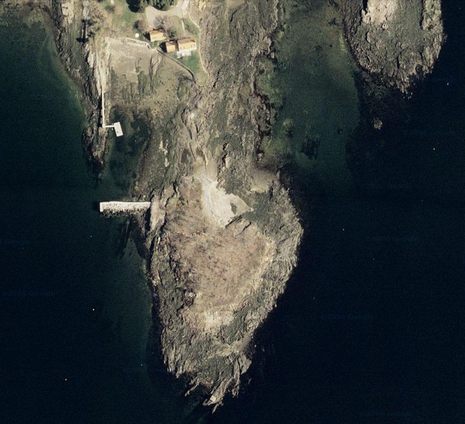 What follows is the last email I received about this neck issue from NOAA personnel, in this case a quality control person at the NGS Remote Sensing Division.  I added the bold face, and also the topo map clip from 1906 and chart clip from 1864.

I rechecked the tide level for the time our shoreline mapping photography was acquired. I used three slightly different methods, all of which we commonly use in this office for determining post-acquisition water levels for our mapping projects. The results I got varied between 10.65 feet and 10.82 feet above MLLW, based on applying offsets (both time and height) from the Bar Harbor reference station to the Rockland tidal sub-station. The known MHW level at Rockland is 10.17 feet. So at the time our photos were taken, the water level was about 0.48-0.65 ft. above MHW. The mean tide range at Rockland is 9.78 ft., and our standard tolerance for collecting tide-coordinated aerial imagery is ±10% of the tide range, or 0.98 ft. in this case.  So, despite the fact that the water level was half-a-foot above MHW at the time our photos were taken, it was still well within our tolerance, and for mapping purposes the shoreline extracted from the imagery can be expected to represent the MHW line.
In other words, the NGS Remote Sensing Division followed our standard procedures for mapping the MHW line, and that line was properly applied to the ENC. 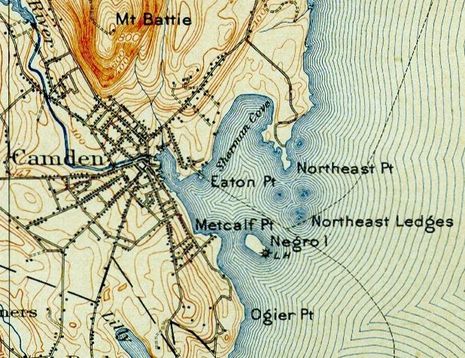 I also checked the preliminary tide level at Rockland (verified tides from CO-OPS are not yet available) for the date and time when Mr. Ellison’s ground level snapshots were taken, and I agree with his assessment that the tide was practically at the exact level of MHW (10.14-10.18 ft. above MLLW).  It is hard to get a sense of scale in his snapshots, but in much of the neck area it appears that the rocky ledge projects significantly more than a foot above the water, in some spots possibly several feet.
I cannot account as to why these rocks that appear to be completely bare in his photos taken at MHW, appear to be covered in our aerial photos taken at only a slightly higher tide level.  Perhaps the uncertainties in determining the exact water levels are high in this area, possibly varying significantly with local weather conditions?  In any case, the possible inaccuracies in the new shoreline do not appear to be very significant
for this location.  As can be seen in Mr. Ellison’s snapshots, any bare ground connecting NE Point to the mainland is very low and narrow, and possibly broken (as he said) by gaps of water that you could step over.  The original ENC shoreline was derived from the raster chart, in which the width of the bare neck was exaggerated for cartographic clarity.  In addition, the entire neck area is surrounded by a Ledge – Covers/Uncovers line, which should indicate to any prudent mariner that it is not safe to navigate through this area.
Therefore I don’t believe the problems with the new shoreline that Mr. Ellison reported rise to the level of “critical correction”.  Perhaps the next time NOAA maps the shoreline in this area we will have better data and methods, which might allow us to chart the MHW line at Northeast Point such that it more closely “conforms to reality”, but for now I believe the ENC should be left as it is. 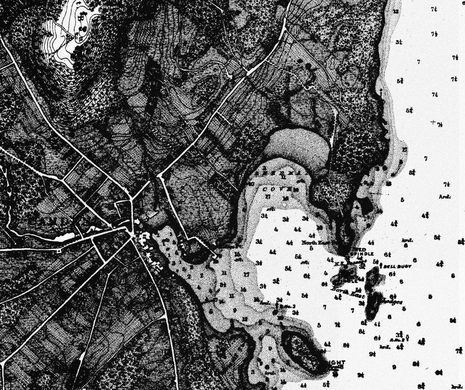