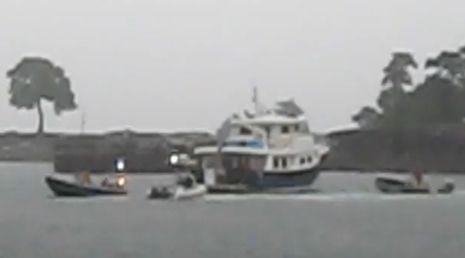 I’m generally quite reluctant to fault fellow boaters when things go wrong, because I’ve made about every mistake possible myself at some point, and probably will again.  But what I hear about this scene, captured in part on YouTube, is a bit disturbing.  That big beautiful trawler didn’t actually drag onto the rocks around Northeast Point, but that’s probably only because crews from from Wayfarer Marine, Yachting Solutions, and the Harbor Master’s office worked hard to hold her off, in pouring rain and lots of wind.  A local hero even managed to squeeze his way through a pilothouse window, figure out the complex starting procedure, hoist the anchor, and put the boat safely on a dock.  But the owner, who showed up after the storm had passed, was apparently somewhat casual about what happened, though most boaters would know that a salvage claim was a possible road not taken by the rescuers, and…

…The next day, he purportedly drove that big, beautiful trawler right over the tide covered Northeast Ledges as he exited Camden Outer Harbor!  Note the ledges on the Coastal Explorer chart screen below; while it’s true that an occasional boater gets confused about the two channels with sometimes hidden danger in between, the vast majority get in and out of here fine.  I’ve also indicated where the trawler, purportedly anchored on only 86 feet of chain, dragged. The whole incident is a reminder that, in this country at least, you can own a boat like that without a license or any experience, which is why smart insurance underwriters won’t write policies in such situations.  A lesson for a lot of us is the value of leaving your boat accessible, and with operating instructions in an obvious place, so that someone like our local hero — a consummate boat driver with a number of saves under his belt — might help you out when you’re not around.  That idea may run counter to some people’s security needs, but I have an idea on that subject I’ll explain next week.
Note also the 7/22 Update date on the NOAA ENC below.  That’s because NOAA quickly fixed the Inner Harbor shoreline detail mistakes I pointed out earlier this summer.  The Coast Guard has also verified the actual location of the private channel buoys (numbers 8 through 18), and after a couple more steps they too will be corrected on the chart.  (I’ve seen the USCG paperwork and it does seem clear now that the mistaken locations came from a private aid permit application filed by our Harbor Master.)  I’d like to extend a big thanks to NOAA and the USCG for all this. 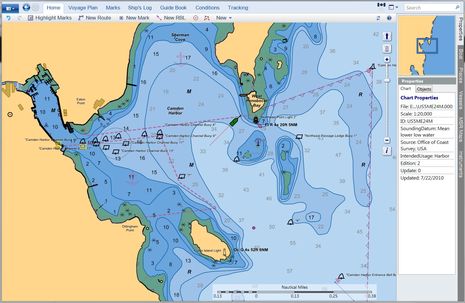 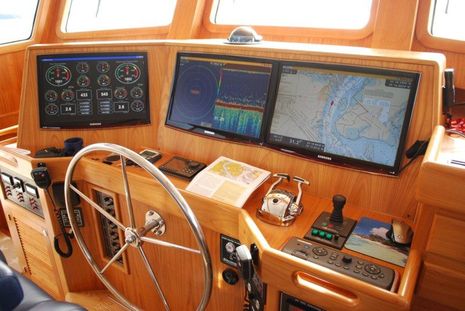