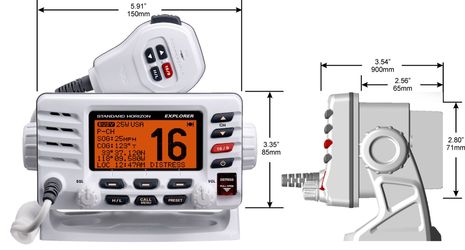 Today Standard Horizon formally announced a pant load of new VHF and MFD products. Most feature good, if incremental, changes; many have already have been shown at the Fall boat shows; and some are even listed at online stores…but at least one will likely blow your mind!  Today I’m going to run through some highlights, with links to more detail.  So how about the “ultra compact” dimensions of the Explorer GX1600 VHF seen above?  Won’t that fit in many places most radios wouldn’t?  It’s also a full Class D DSC set for only $170 MAP, as is the new Eclipse DSC+ GX1150 for only $130.  Class D, incidentally, becomes the minimum standard for all new fixed VHFs in the U.S. as the FCC finally killed the somewhat crippled SC101 standard, and if you’re not familiar with those standards check out this explanation (and note the circa 2007 VHF pricing)…

Standard Horizon also has two new handhelds.  The HX290 is billed as an “extremely affordable 5W floating VHF” at $120 while the somewhat similar-looking $200 HX400 is a commercial handheld that can be programmed with 40 Land Mobile Radio (LMR) channels. Note that the “sold out” notations at these online stores are a bit disingenuous as all these products aren’t scheduled to ship until January, and a couple of these radios are not yet FCC approved, which means they are truly not for sale yet.  And MAP stands for minimum advertised price, which is generally closer to the real price than the more standard MSRP (manufacturer’s suggested retail price).
SH’s hit VHF/AIS combo unit, the Matrix GX2100, will become the GX2150 in January, with new features briefly described thusly: “GPS in / DSC out 4800 and 38400 baud rate selections (Allows connection to GPS Chart Plotter with 1 NMEA IN/OUT), selectable True
and Magnetic readings for AIS target and PA/FOG simultaneous operation with AIS display, GPS status page.” 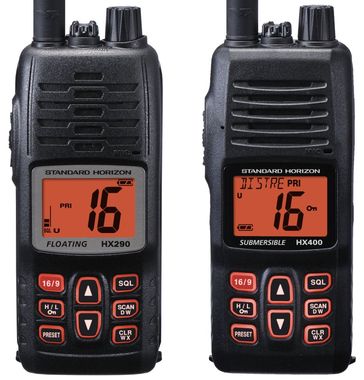 Standard is also refreshing its whole MFD line, and the most significant change I notice is that the built-in charts cover not only the coastal U.S.A. but also the Great Lakes, Canada, Bahamas, Caribbean, Cuba, Mexico, Puerto Rico, and Central America!  I asked for more detail and learned they are indeed C-Map charts that include “depth contours and spot soundings to 66 feet on lower scale
charts and 33 feet on higher scale charts” plus all nav-aids and relevant tide and current predictions.  These built-in charts can be updated, and the displays also support C-Map NT+ and MAX chart cards. Given that the smallest model, the 5″ CP190i, has a MAP of only $600, won’t some cruisers buy it primarily as a chart portfolio in a waterproof, sunlight viewable package (with a built-in high performance GPS and many other features)?  Could this be C-Map’s response to the inexpensive chart apps Navionics is distributing?  Other new models are the 7″ CP390i and its fishfinding sibling the CPF390i, as well as the 12″ CP590, all with the expanded built-in chart regions.
The mind-blowing product that’s not online anywhere yet?  Well, sorry, but I want to confirm one more detail.  Soon, though. 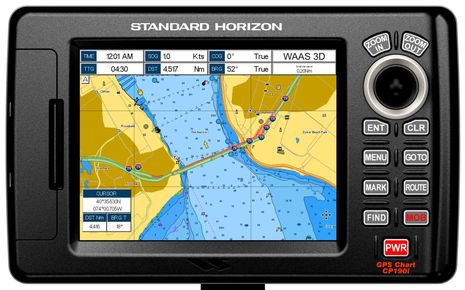