Oh my.  This morning an email alerted me to this photo of an AIS Display Filter menu on a Furuno IMO-class FAR-2117 radar, and Steve Dashew’s understandable misunderstanding of what it means.  The seductive myth that ships have the technology to completely ignore Class B AIS transponders is back!  And the comments that follow demonstrate just how destructive that myth is, like:  “Wow. That is really disturbing. I am sure it is something that the
manufacturers of Class B transceivers don’t want us to know. I have been
waiting for the Vesper Marine transceiver to become available – I might
opt for the receive only unit now and save some $$$.”  Here’s the truth:  No matter how that display filter is set, the 2117 radar will continue to track all AIS targets and will automatically display a filtered one — in flashing red, with a buzzer, even! — if it should enter the watch keeper’s area of collision concern, which is exactly how the IMO intends to improve big ship AIS monitoring!…

Back in early 2009 I got a copy of the IEC specifications for big ship radar/AIS display and wrote an entry called AIS SOLAS-style, Class B is NOT ignorable!  (Yes, I get worked up about this subject 😉  Today I downloaded the manual for the IMO version of Furuno FAR2xx7 radar, which you’ll see listed here, and, no surprise really, it conforms closely to the IEC spec.  The key phrase is seen below in the manual’s section about the Acquisition Zones where radar targets are automatically acquired.  ARPA, as you probably know, is the key feature of ship radars and traditionally the primary tool watch keepers use to avoid collisions.  So “When a target enters the acquisition zone…the AIS display is automatically turned on if it is off” not only means that the worry about ignoring Class B vessels is unfounded but that IMO is raising AIS target status — be it A or B — to ARPA level.
Remember that previously there was no mandated graphical AIS target tracking on ship
bridges, because the display that comes with Class A Transponders is
only required to list targets in text.  But I think that radars like Steve’s are now required on all new SOLAS vessels and will be mandated on older boats eventually, so what he’s actually looking at, beyond the confusing display menu, is an improvement in IMO level AIS tracking.  But the idea that ships can, or would, ignore Class B transponders is incredibly persistent, as we saw again last April, and as I wrote about last summer in Cruising World.  And if I’ve misunderstood what’s going on here, please don’t hestitate to correct me; this is important stuff.

PS  Thanks to some Panbo readers who were more diligent about reading the Furuno manual than I was, it appears that there is a way to filter out even dangerous AIS targets by their equipment classification or vessel size (see comments below).  It takes some doing, and I doubt it will be done often, especially outside crowded harbors, but I’ll take that up in another entry soon.  Update here. 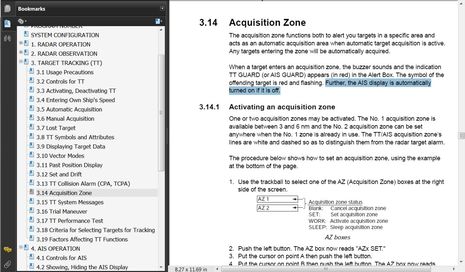