Click above for a readable image, and see how blithely an anonymous Sailing Anarchy poster spread AIS misinformation, reinforcing a myth that threatens to curtail adoption of Class B transponders.   After first establishing himself as a sailor who uses an AIS receiver, he writes knowingly (but ignorantly) about specific AIS requirements around the world.  And then comes the doozy: “My recollection is that AIS Class A transceivers fitted to commercial
vessels have a big red IGNORE CLASS B Transceivers button to declutter
their displays and concentrate on avoiding vessels that will do more
than smudge their paint in a collision“.  That’s unadulterated BS on all counts — the big red button DOES NOT EXIST, the watch standers who don’t care about small vessels are rare, and this blowhard has probably never seen a ship’s bridge to “recollect” — but the myth continues to spread…

Yesterday I came across an even worse instance, because the source was a industry tech support person!  Cruiser Glenn Tuttle recently moved up from an AIS receiver to a transponder, and was disappointed when several cruise ships he called around Panama couldn’t seem to see his vessel target a couple of miles away.  (I don’t know what happened, but wonder if in fact they saw his dynamic target data but not the static data with his name, size, etc. — a known issue with older Class A transponders.)  At any rate, Glenn researched the problem, as he reported on the Cruisers Network Online (which he happens to moderate):

I called Electronics Unlimited in Ft Lauderdale, Florida, where I purchased the unit and antenna.  They just referred me to the tech support at Simrad.  I finally was able to speak to a Simrad technician who told me “It is normal for Class A units not to be able to communicate with Class B units.”  However, he continued to say “my Class B unit should be able to be seen by all Class B units”.

That misinformation makes me want to scream!  Class A and Class B AIS are carefully designed to work together; they are an integrated System.  The Class B transponders I’ve tried have been visible to almost every ship I asked (though sometimes not the static data).  Yet Glenn understandably goes on to say, “Had I known this, I would have just replaced my old passive unit with another passive receive only unit and saved a bundle, or maybe bit the bullet and bought a Class A unit.”
My hope is that Glenn will soon have some positive Class B experiences, like being called by name while crossing a ship channel on a snotty night.  My entry on that incident — which included the theory that this ships-ignoring-Class-B fear has become a “meme” — drew a lively response.  I’d like to add a few points:

*  First of all, let’s start describing this issue as “ignoring” Class B, because “filtering” is a vaguer term and hence confusing.  For instance, a ship captain says he regularly filters Class B — just meaning he chooses not to show Class B target name text on his plotter — but a listener assumes that he’s ignoring Class B…and the myth spreads further.

*  In fact, I now understand that Coastal Explorer’s option to not “Show Class B” — once called out here — does not mean they are ignored.  Class B targets pop up again if CPA/TCPA alarm thresholds are crossed.  And I believe that Fugawi removed the “Ignore Class B” option from its software completely.  In that same thread, incidentally, a knowledgeable commenter claimed that new ship radars and ECDIS were mandated to offer the ability to ignore Class B, but it turned out that the rules being formulated — explained here — are quite the opposite, allowing targets of various sorts to be filtered but demanding that dangerous ones be shown.

*  When you think about it, can you imagine that the IMO would allow anyone to ignore its carefully designed anti-collision system?  Hell, no.  As the good Kennebec Captain pointed out in yet another Panbo discussion on this subject, Rule 5 of the International Rules of the Road states that “Every vessel shall at all times maintain a proper lookout by
sight and hearing as well as by all available means appropriate in the
prevailing circumstances and conditions so as to make a full appraisal
of the situation and of the risk of collision” and those means certainly include AIS.

*  To make the point stronger, can you imagine a Captain before a judge and jury trying to explain that he set his equipment to ignore Class B vessels, one of which he inadvertently ran over, because they cluttered his screen?

I think the truth here is pretty obvious.  The big question is why does the myth grow that ships can and do ignore Class B transponders.  Let’s discuss, and hopefully give Glenn Tuttle some confidence that he did the right thing by installing a Class B.

PS  Concerning the Class B zig zag plotting worry discussed in the comments, here are the tracks of two Class B boats in San Francisco Bay this morning: 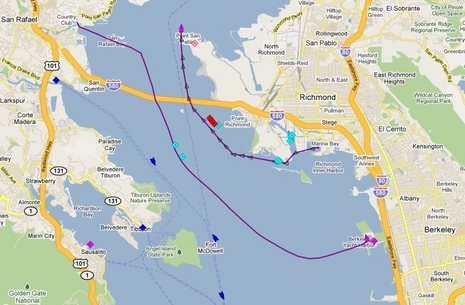