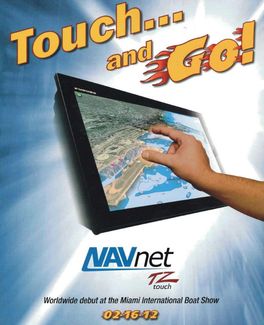 Furuno has been extremely tight lipped about its new NavNet TZ touch systems, aside from the ad, but much more should be revealed in this morning’s press breakfast. I’ll be there and will report details in the comments section. What I gather so far is multi-touch screens that still have some buttons alongside, including the RotoKey, and are — according to a couple of the BWI/NMMA Innovation Awards judges, neither an electronics buff — “very intuitive” and “fun” to use. A much faster processor will be no surprise, nor will support for large SD chart cards and all existing NavNet 3D peripheral hardware.  I’m hoping that Furuno will also reveal its strategy for smart phone and pad integration — shouldn’t a multitouch interface and the company’s long love of Ethernet help with that? — but I have a particular interest in what the black box version of NN TZ is going to be like…

I recently became advisor to a gentleman intent on modernizing the electronics of a beautiful 58-foot fast motoryacht, and that got me looking into the details of the various black box systems that seem appropriate. In fact, he’s already had most of what was at the two large helm stations torn out. A pair of Raymarine E140 Wides in each “Himalaya” was considered, but the worry is that they are becoming legacy machines. As I understand it Ray laboriously moved some 1.1 million lines of code into the slick new e-Series operating system architecture which means that when a new peripheral like the CP450 CHIRP fishfinder comes along adapting the old E-Series software to it is a completely separate process that may not be worth the resources involved.
And I’m afraid that the same caveat applies to Ray’s G-Series, which actually would be even better suited to this project. Given the helm ergonomics, the G’s choice of keyboards, even a wireless option, would be nice. Plus this owner plans 6-8 cameras, and the G-Series seems to have a neat way of bridging multiple video inputs to Ethernet before going to its choice of high bright monitors. Not that the G-Series wouldn’t make a great package as is, but some owners, and this one in particular (I think), want a system that will easily adapt to future developments.
So how about a Simrad NSO system? Like the G, each processor supports two mirrored monitors, typically one up and one down. Plus Simrad has a new LED backlit monitor series that look great and support multiple camera inputs.  He might also consider four Garmin 7015 15-inch displays. Or maybe Furuno NavNet TZ BB? It’s a big decision, and one of my many tasks during the next few days is to do some scouting. Your opinions would valuable too. Without much worry about budget, what would your choice be, emphasis on performance, future proofing, and integration with beloved iPads? 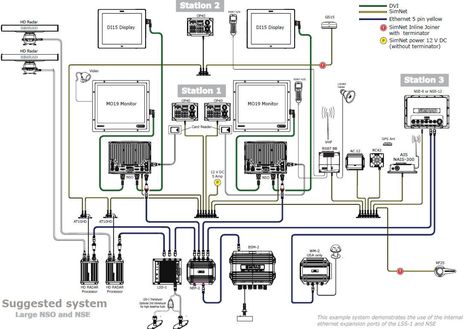