U.S. Coast Guard mobile, a good app with a compelling back story 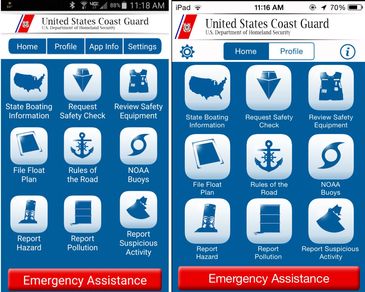 The free USCG Boating Safety App has a lot to offer, as indicated by the home screens seen above on my Android phone and iPad Mini. Version 1.0 also seems almost surprisingly fast and polished, which may make more sense when you learn that it was developed by a small, highly-motivated team instead of a large government bureaucracy. In fact, the app is a gift to us from a grieving father trying to honor a son who was an enthusiatic CG Auxilary volunteer on the path to becoming an active duty Guardsman… 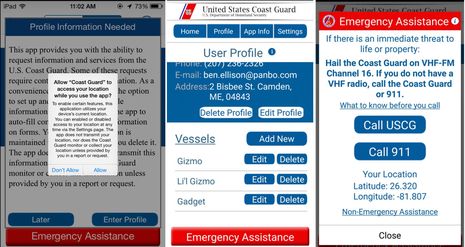 You don’t have to permit the USCG app to use your location or set up detailed profiles of yourself and your boats, but many functions work better if you do. For instance, when I tried the Emergency Assistance button while in South Florida earlier this week, the app dialed the Miami Rescue Center and popped up my lat/long so I could read it off easily. (I did not intend to actually make the call, but it was answered immediately by a responder who was polite about my mistake. Impressive!) 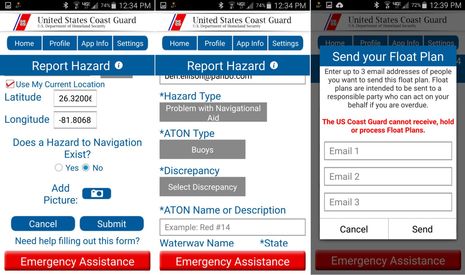 My phone’s location and the contact info stored in the app — nothing goes to the cloud, they say — also makes it a snap to use the hazard reporting function, which includes many easy-to-click-on categories and even the ability to add a photo. Personal and boat profiles help with float plans too, and you can use previously filed ones with pertinent data like crew lists as templates. But there’s no provision for cruising stops between departure and destination ports, and as always, the USCG cannot monitor such plans themselves; you need friends or family to report in if your plan goes awry. 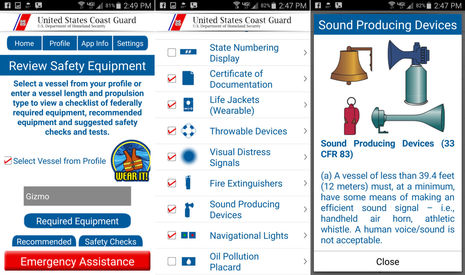 Boat profiles streamline the safety equipment section as well, though it’s also easy just to enter length and the propulsion types. The requirement descriptions are quite complete and often illustrated and/or linked to appropriate USCG regulations. Individual state boating regs are also accessible from the app. 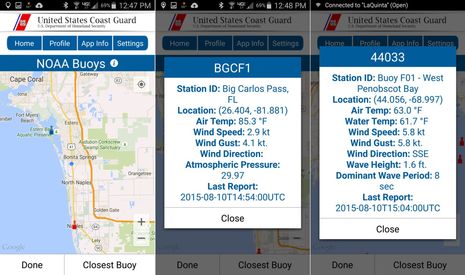 One finger tap in the app showed me nearby weather buoys and a second called up the latest observations. I could also quickly zoom/pan to my home waters, but that’s where I detected a fairly minor (and common) glitch. Good old “West Penobscot Bay” Buoy F01 cannot only measure wind, wave and temp, but also visibility, as you can see here, and that’s darn valuable in foggy Maine. The app just needs to be taught how to parse and display the visibility data field. 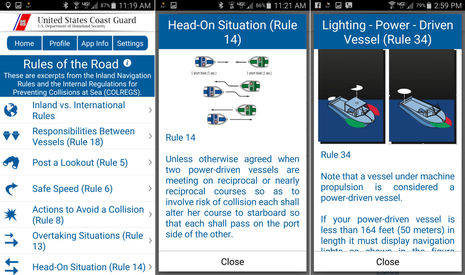 And finally, here are some screens from the Rules of the Road section, which may benefit from only including excerpts. The designers did a good job, I think, of selecting and ordering the most important rules, which are also illustrated and linked to the full online document. I spotted another small glitch on that right hand page (a mixed up illustration reference), but overall the USCG app is remarkably solid in its first edition.

It’s worth reporting bugs like these because Luis Romero and his BastaYaPR Foundation not only gifted us all with the USCG Boating Safety App — Apple version here and Android here — but are “committed to supporting it, including updates, for the app’s lifespan.” I find it nearly impossible to imagine the emotional impact of having your son murdered by a 14-year-old while defending his girlfriend on the night of his 20th birthday — Petty Officer David Marin’s well-written coverage here — but I think that Mr. Romero has not only honored Julian beautifully but also demonstrated how grief and anger can be channeled to the good. Thank you, Luis. 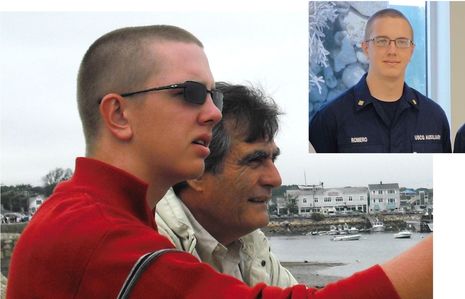