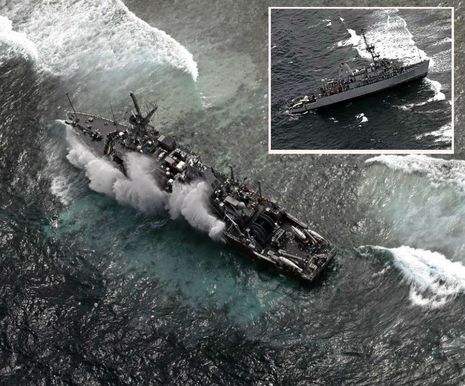 I’ve heard of hitting “the bricks” as in going hard aground — as well as “bricking” a computer (or other gadget), as in breaking it so badly that it’s only good for a door stop — but gCaptain surprised me with “USS Guardian is Fully Bricked Up and Getting Battered on Philippine Reef.” The situation is even worse since the minesweeper swung 90 degrees and is getting so hammered that it’s hard to imagine how it can be removed from the tiny Tubbahata Reefs National Park. Thankfully no one was hurt (to my knowledge) but I’m probably thinking about terminology because it’s horrible to contemplate what those pictures imply about the damage to ship, reputations, and — most important — precious wildlife. How could this happen?

Well, as the entry title implies, U.S. National Geospatial-Intelligence Agency (NGA) has already admitted that “inaccurate navigation data” on its Digital Nautical Charts (DNCs) “may have been a factor in the Guardian grounding” with reports that the reef was “misplaced by about 8 nautical miles“!  The best information I seen so far — and conclusion, as in “don’t trust charts” — is on Bob Couttie’s Maritime Accident Casebook.  Criminey, “the Greenpeace ship Rainbow Warrior also grounded on Tubbataha Reef in 2005” when “The chart in use showed the reef 1.5 miles from where it actually was.” Couttie further reports that hydrographic work in the Phillipines has been delayed and he kindly showed me where the relevant DNC can be viewed online. {ERROR: The NOAA site is showing NGA raster charts not the DNC vector charts that are supposedly based on them. See comments for more}… 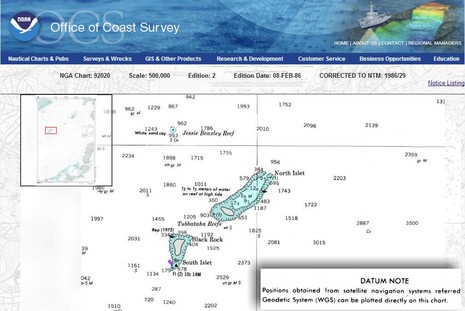 You may well want to look yourself but some things I notice about DNC 92020 are that it’s in a very large area 1:500,000 scale and that it apparently hasn’t been updated since 1986. And what I notice about the area is how extreme the bathmetry is. Look how deep (in meters) it is around the reefs and especially notice the underwater spire known as “Jessie Beaxley Reef” to the north.  All of which raises red flags navigation wise (though I can also imagine how amazing those Tubbataha coral walls must be). So could these low islets also be misplaced on the official charts, and, if so, have all the other charts followed suit? 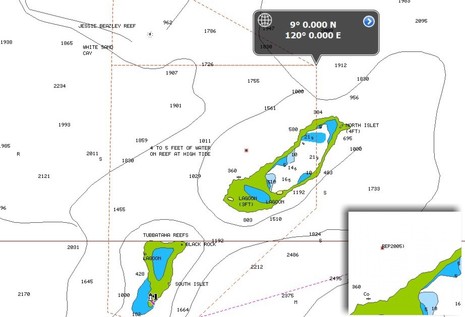 The only other chart I have access to right now is the Navionics Gold version I got using the voucher that comes with their Freshest Data chart cards (discussed on Panbo in May). These only run in Navionics lightweight PC viewer, but I’m pretty sure the reefs are located in the same place as on the DNC, or at least quite close. But Navionics definitely provides some fresher data. Note, for instance, the “brick” about 1.5 miles northwest of the northern reefs. I added an inset which shows how it’s labeled “Rep2005” when zoomed in further. Sure seems like the spot reported by the Rainbow Warrior. Navionics also describes the islets and lagoons much differently than the DNC and I’ll bet Navionics is closer to ground truth.
I’m a curious monkey so I also made routes around the reefs in Navionics PC App and exported them to Google Earth. Unfortunately GE isn’t showing the satellite photos for the area but the outlines correspond fairly well with the data it can overlay. I even cross checked some of the GPS points indicated by the dive markers and they made sense on the Navionics chart. On the other hand, that thin “Park Area” outline of the Northern Islet looks maybe a mile offset in the Rainbow Warrior direction. Still I don’t see any indication of an 8 mile error and, besides, I’m wondering what the USS Guardian was doing in this poorly charted and dangerous area at 2:30 am anyway?  And would it have helped if they had other charts to look at besides the DNCs, even an iPad running Navionics Mobile?
Anyone with ideas about how this happened, and especially anyone able to send alternate charts for comparison, please speak up. In the meantime, let us all hope that the US Navy can keep the Guardian from doing much damage to the park. 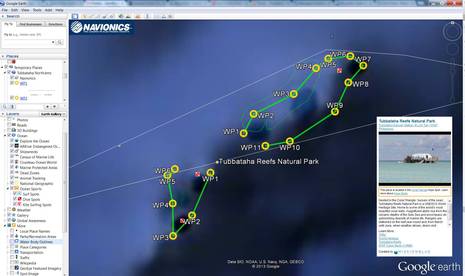