Why we need crowd sourcing, Downeast #2 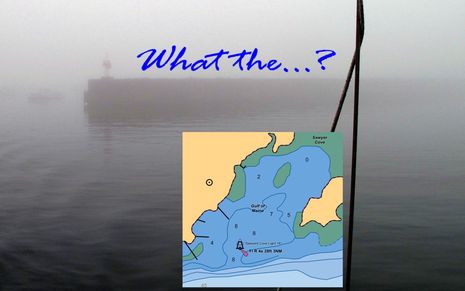 Yup, the first time you cruise into Sawyer Cove in often foggy Jonesport, Maine, you may be surprised to discover that there is a substantial steel and concrete breakwater extending from the fixed light almost all the way to the Eastern shore.  That’s because the structure still hasn’t made it onto the official charts, or any chart I’ve seen, even though it was built over 20 years ago, and even though the NOAA ENC inset above was updated on 9/17/2010.  I mentioned this when I first wrote about Sawyer Cove in August, but that entry was largely about how poorly any of the guides — digital or paper, professionally written or crowd sourced — covered the facilities available.  Since then I’ve learned more about the breakwater situation, and it’s depressing…

Ever since I browbeat NOAA about the screwy private channel bouys that showed up on the new paper, RNC, and ENC harbor charts for Camden this spring — and which turned out to be the result of a PATON application poorly filled out by our harbor master, but are yet to be fixed on the charts — they have graciously fielded other cartography questions.  When I asked about the Jonesport breakwater, this is what I learned:

…the last time the shoreline
around Jonesport was updated was project CM8401 with mapping
completed in 1987 using aerial photos taken in 1985.  We have a current
project in work (ME0702) covering this area, for which we have been
attempting to acquire acceptable tide-coordinated imagery for a while
now.  I think we have two flight lines left to be acquired.  As soon as
all of the imagery is acquired and processed it will move into the
compilation phase.  With the number of projects we have in the
pipeline, I expect it will be a couple of years yet before the updated
shoreline for Jonesport is delivered.

Wouldn’t you think that there’d be some quicker mechanism for dealing with major changes like this breakwater, especially as it no doubt involved permits, surveys, and probably even federal money?  Heck, the characteristics for that fixed navigation light — a database maintained by the USCG and passed along to NOAA — states that it’s “On end of breakwater” (which you can find out from the Light List or by drilling down on the ENC vector chart).  But I trust that there’s a reasonable explanation for the NOAA process, and that nothing we can say will change it anyway.
And therefore this large structure certainly serves as a solid example of why we need easy ways to create user generated information and integrate it into electronic navigation.  And it’s just the sort of issue that excites me about Navionics big embrace of crowd sourcing.  While I could post a Hazzard Note about the breakwater on ActiveCaptain, and finally did today, a Navionics UGC entry stands a good chance of being validated and becoming part of the chart database used by lots of boaters who’ve never heard of crowd sourcing, and may not want to.  I don’t know if Navionics will qualify chart updates based on UGC (not hard to do in a vector chart) but it doesn’t take much Google research to find a vivid photo of the beastly breakwater or even a reference from a professional print guide.
What’s likely much harder to do is to remove something that’s theoretically dangerous from a chart, and again the Jonesport area provides a good example.  The shortest, most scenic route from Sawyer Cove to a major Maine wonder — the long and virtually unspoiled fine sand beach at Roque Island — is through the Thorofare.  Except that according to the official chart there’s a “rock awash” right in the middle of its narrowest section.  On the paper/raster version the rock is notated as “REP” for “reported” which gives it a lot less weight in my mind, but on the ENC chart, and at least one of the commercial charts which all tend to mimic ENC data, that “reported” status is omitted, even in the verbose object details.  Maybe that’s why the ActiveCaptain entry warns against running the Thorofare without local knowledge, despite my edit suggestions.  And why I saw yachts crawling through there even though the two best printed guides to the area debunk the rock pretty thoroughly via multiple first hand reports (i.e. secondhand crowd sourcing).
And I’d like to think that my first hand account, now in AC as shown below, is especially compelling, thanks to StructureScan.  But what will Navionics do with information like this?  Sure, it will stay in the UGC “community layer”, kind of like AC, but the next step, actually removing a possible danger from a chart, is a stupendous liability.  I’d guess that NOAA would have to send a ship and wire drag team, some day.  Maybe, given enough UGC, Navionics would add a notation stating that many users could not find the damn rock?  Welcome to the new world of  crowd sourced charts.  I think they’ll be better charts but it will pay to have programs like CE and MS TZ that can manage multiple sources, as discussed on Friday.  What do you think? 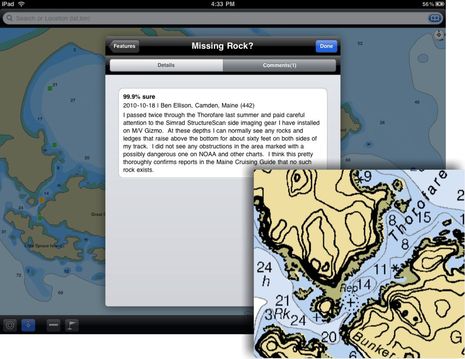