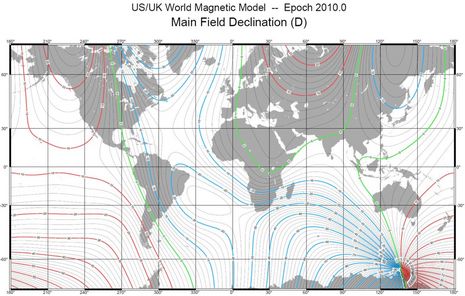 Is your boat’s World Magnetic Model up to date?  Does it matter?  It may be a sign of Miami new product overload (here and here) that I got intrigued with this subject yesterday, but it was actually a Maretron press release (pdf here) that led the way.  The company is proud that their latest GPS200 now outputs magnetic compass variation based on the latest WMM2010, and that a firmware update will bring the same precision to their existing GPS receivers.  Heck, I thought GPS units just got variation from the satellites, and was reminded how much we take compass technology for granted…

In fact, it’s mind boggling to contemplate the sensuous diagram above (available as a much bigger PDF at the multinational agency which maintains the Model).  I’ve understood since my earliest days as a chart and compass navigator that Variation — the difference between Magnetic North and True North — varys according to where you are on the planet and that the variation changes slightly over time.  Where I live, if you steer 90 degrees by the compass, you’re actually headed 73 degrees True because, according to the chart rose, the Variation was West 17 degrees 30 seconds in 2001 and it decreases 3 seconds a year.  (Which, along with the prevailing southwesterly winds, is why the northeast trending Maine coast is called Down East.)  Only obsessives bother with Variation corrections, though, because they’re so minute, and once you get past the add/subtract confusion (Can Dead Men Vote Twice At Elections, etc.), you’re pretty much good to go.
But consider our forefathers, who were so much more dependent on the magnetic compass for crossing large bodies of water.  Variation charts, like Halley’s 1702 edition below (when Maine V was about W 12 degrees), must have entailed all sorts of difficult onboard celestial observations and pre-computer calculations.  And did they get it right?  The first sentence of the WMM Wiki entry on the math loses me!  And as you can see from these illustrations Variation can vary in pretty extreme ways, especially if you wander close to the magnetic poles, and there are other factors involved, like magnetic intensity and dip.  Did you know that good compasses are set up for the hemisphere you boat in?  The whole magnetic phenomenon is deeply (and beautifully) complex, which is why scientists only feel comfortable predicting Variation for five years at a time. 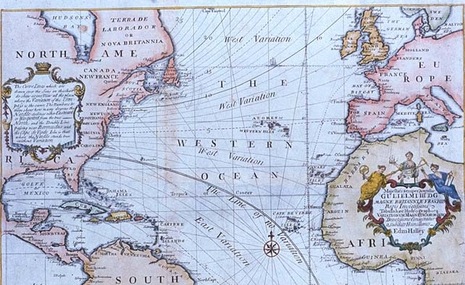 So here’s what I wonder:  Was there a period long ago when old salts were as skepitical of new fangled compasses as some are today about GPS and electronic charting?  “Hey, kid, get your head out that binnacle and pay attention to the birds and wave trains!”  Then later did some skippers freak out when their compass went blooey for a few minutes due to a local magnetic disturbance or poorly engineered gimbeling?  I’ve got a free Panbo subscription for any reader who can document such behavior.  (Also note that every single person who fills out the marine electronics survey also gets a free subscription 😉