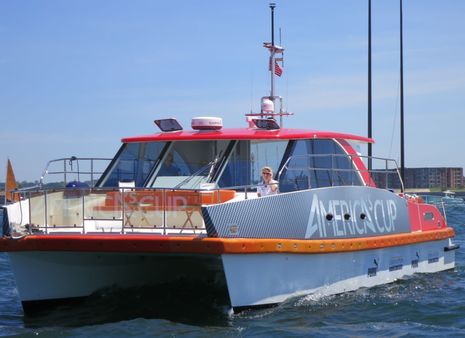 A visit to the America’s Cup World Series in Newport, RI in June 2012 provided an opportunity to tour the engineering spaces and helm of this second-generation mark/VIP boat as a follow-up to Ben’s visit to hull number one. Before the engineering tour I spent the day on the race course in the vessel’s predecessor, observing the racing and learning what drove the design improvements to this latest generation. 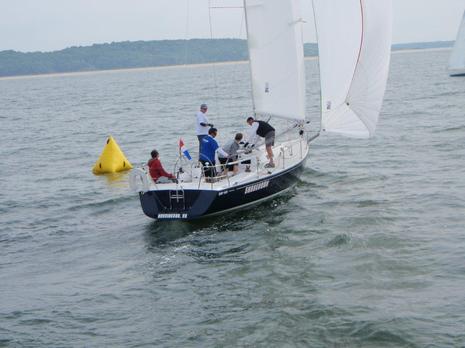 AC mark boats are power-driven catamarans that basically perform the same function as the $124 inflatable marks used in more budget-conscious sailboat racing. The typical inflatable has an anchor holding it in place to mark a destination on the race course. The racing teams then navigate their sailboats around each mark, as close as they can, without touching.

Positioning those marks on the race course is a challenge, as they need to be in precise spots based on wind direction. It is not uncommon for an inflatable to be hundreds or thousands of feet from where the race officials need them to be due to a wind shift. Ideally, when the sailboats pass each mark, the next mark is at a wind angle that meets the criteria for a good race course. It takes time and a powerboat to go back, lift the anchor, and move marks if the wind shifts. Usually there is more than one mark per powerboat, creating work for the race committee to move the marks around while the sailboats wait.

The mark boats for the AC don’t have this challenge. The powerboat is the mark; it simply drives itself to a new location if the wind shifts.

Oh, and forget the anchor. The mark boat pilot manually hovers the boat in the precise position chosen by the race committee and grits their teeth as the racing teams approach and round them. And not just one, as AC mark boats can be deployed in pairs spaced 80 meters apart, in a configuration called a “gate”. The AC 45 and 72 racing cats sail between the pair of mark boats, rounding either mark boat to continue along the race course to the next mark(s). The “gate” concept creates a more complicated strategic decision for the racers, particularly if the gate is absolutely square to the wind.

So in addition to being movable on the course — which can adjust the overall time of a race (hello, network TV) — the mark boats can also pivot to the direction of the wind. If the pair of mark boats is perpendicular to the wind, neither side is obviously favored, making the decision a tricky one based on traffic at the mark and which side of the course ahead might be faster. 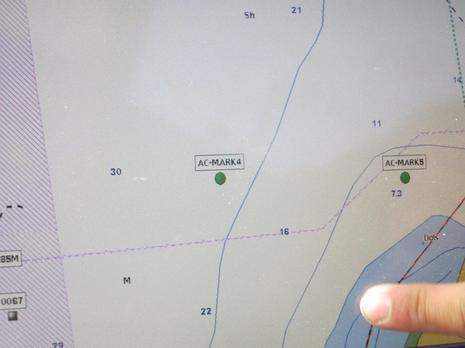 To get into position, the two mark boats consult their chart plotters for a specific latitude/longitude position transmitted by race officials via a custom wireless network Ben wrote about here. The first mark boat will stay exactly in that spot. As the wind shifts, the second mark boat is allowed to pivot so the pair stays perpendicular to the wind and 80 meters apart. On the second boat the co-pilot stands in the middle and maintains a constant operational rhythm with the pilot taking measurements with an electronic range finder, observing the area, and making decisions to maneuver the mark boat in response to shifts in wind direction.

In the picture above, the Garmin GPSMAP 7012 is showing the two mark boats (AC-MARK 4 & AC-MARK 5) where they should be. Those waypoints are not fixed in the chart plotter, but rather sent over a Wi-Fi network. The inshore AC-MARK 5 mark boat was positioned at a fixed latitude/longitude position near the beach, while the mark boat that I was on pivoted 80 meters away perpendicular to the wind. 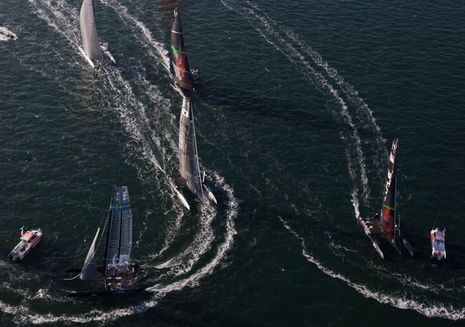 Can you imagine how exciting it is to be a passenger on such a mark boat, even the small first generation outboard models seen above and in Ben’s photo here? It’s like being invited to stand next to the umpire right in the middle of the football field. You wonder if you will be trampled by the players each time they approach. I had my water bottle, some snacks and there was a bucket on board for the ladies. In the second generation mark boat all that changes. 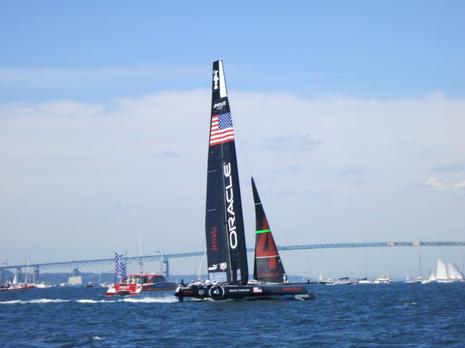 For starters, there is a hostess serving gourmet food to 12 VIP guests on a spacious deck with two flat screen monitors for viewing the race when the action is on the far side. The monitors are fed by IPTV over Wi-Fi-type hardware tuned using a special frequency spectrum purchased by America’s Cup Race Management at each venue they operate.

A whole lot changes for the pilot and co-pilot too. For example the Volvo Penta IPS Dynamic Positioning technology takes over the steering and throttle, keeping station on a fixed latitude/longitude position automatically, sort of a “virtual anchor” for their un-inflatable mark. As described to me, the pilot of the second mark boat, after deciding if a wind shift justifies a change in boat position, will use a joystick to pivot the mark boat to a new perpendicular position to the wind 80 meters from the first boat. Just a moment’s effort compared to the first generation mark boat where the pilot and co-pilot are constantly on their toes as they anticipate what is needed to throttle and steer to keep the boat steady in waves, wind and current. 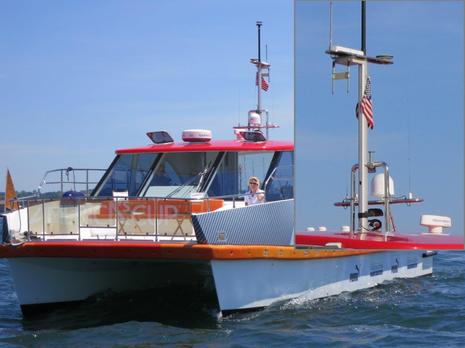 What the many electronic systems on the 2nd generation mark boats don’t do well is to share GPS receivers, as each system has its own. The most precise among them would be this NovAtel GPS that meets the specialized needs of race management to measure and report within 2 centimeters the position of each watercraft in the venue relative to a fixed point nearby on land. This is the GPS system that is used by the race cats and all the boats supporting the program, plus the camera helicopters.

Another specialized GPS is the oval shaped Penta Volvo Satellite Compass (PDF) on the right side of the above picture, which uses not just one, but two GPS receivers to determine a compass direction. Then there’s a GPS dedicated to the Garmin 600 AIS-B transceiver. Can’t forget those dual Garmin GPSMAP 7012’s at the helm (pictured here), they get one GPS each, although perhaps they could have been networked if one of them didn’t have such a specialized use for race management (the other is used for standard navigation). Another GPS is used for the trim tab system, it simply reports back the speed of the boat, a low maintenance approach to getting an approximation of speed through water. 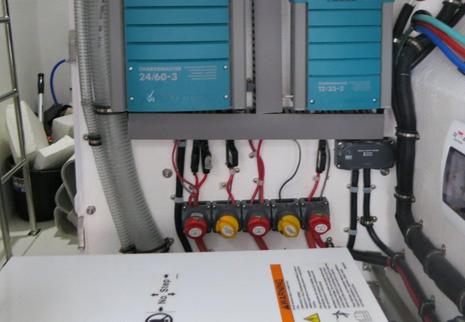 Something else that’s special about these vessels is that when you leave the boat for the day, it waits a few minutes and turns off its own lights and rotates battery switches to the correct positions.  During my tour I learned that this is a feature of the BEP CZone system discussed before on Panbo. The BEP battery switches in the middle of the picture above have embedded motors in them which — as long as they are not placed in a hard off position — can rotate On/Off under the control of the CZone digital control system. The captain explained that the CZone system is a big contributor to giving this boat a very simple start-up / shut-down sequence, one of the many features of the boat that gives him more time to spend with the VIP guests. 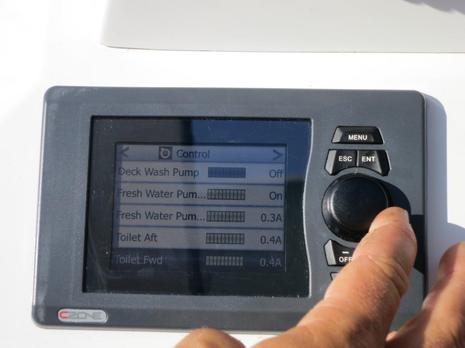 I am not sure if it’s possible for any of us to be VIP guests on this boat, but if so, you might want to check out the good scheduling information available at unofficial CupInfo.com. The next (World Series) race begins on April 16 in Naples, Italy.  Many thanks to Eric Steinberg who dropped what he was doing when I came around asking some final questions at the end of the day, and talked data protocols and marine tech with me well into the night.

– Dan Corcoran is an avid sailor and leads ServiceSPAN, a software and services company focused on improving workflow, visibility, control, and efficiency in back office work centers.