BGAN on a boat? A test in Hawaii A question I’ve never known the answer to:  Can a cruiser use Inmarsat’s BGAN service — the much less expensive “land” version of Fleet Broadband — at least when at anchor in an exotic place where fast Internet isn’t otherwise available?  Well, thanks to “curious cat” Dan Freedman, we’re a lot closer to the answer.  Dan recently acquired a lovely trawler and he seems to be having a ball applying his technical background to improving its electronics, and blogging about it.  His experiment with BGAN was done at home in Honolulu, not on the boat, but nonetheless he feels its ability to cope with a shifting platform is “astonishing”…

Dan found that once he’d aligned the little portable BGAN antenna — which sounds like a simple process — he could move it left or right about 45 degrees, and up and down about 25, without losing his connection.  Which sounds like a lot of boat motion, doesn’t it?  He lays out the reasons a cruiser might want to consider BGAN in this entry, and then his detailed testing — file download/upload speeds, VOIP calls, video chats, the works — in this one.  It makes BGAN seem like a pretty compelling option for certain boaters, especially ones doing one time exotic voyages.  As Dan discovered, you can even rent at BGAN at fairly reasonable rates (though you’ve got to be careful about usage, which he figures could add up to to over $1,000 an hour if you’re promiscuous at the 384Kbps maximum data rate!).
Certainly a permanently mounted system like the FB150 or Iridium OpenPort that Gram Schweikert has been testing out in the Pacific is a better bluewater solution if you can afford one.  And there are also higher-end VSAT solutions, which are actually cheaper in terms of service if your data desires are large.  In fact, Dan found some sort of deal on hardware for KVH mini-VSAT (a service that seems to be expanding rapidly).  But unfortunately that means he won’t be reporting on how a BGAN actually works in real world cruising conditions.  I’m curious if anyone has used BGAN on a boat, or sees some reason why Dan’s testing might not apply? PS, 12/03:  Here’s a photo (taken by Martin Kristensen) of commenter Søren Laursen aiming a BGAN from the Viking Warship replica The Sea Stallion from Glendalough: 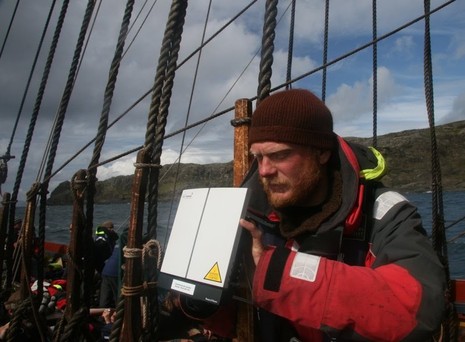