It’s a happy day for navigators when C-Map is running out of adjectives to describe how large an area is covered by its latest chart cards. The press release is not online yet (update), and C-Map’s Web chart catalog doesn’t yet show them, but last week the company announced that in 2007 Wide-size cards will cover about five times the area for the same price. That means, as shown right, that $199 will get you every chart from the Canadian border through the Bahamas and up the west coast of Florida, with all Max features like animated tides & currents, custom C-Marina charts (like below, which I like a lot), and photos of inlets/harbors.  $249 MegaWide cards will also get super-sized, one purportedly covering the entire East Coast, Caribbean and the Gulf Coast. Another covers the Gulf of Mexico, the Caribbean and all of South America, and a third covers the entire West Coast of Canada and the U.S. If you visit C-Map this morning you’ll see that the Jeppesen deal is now official, which I’ll have more on later today. 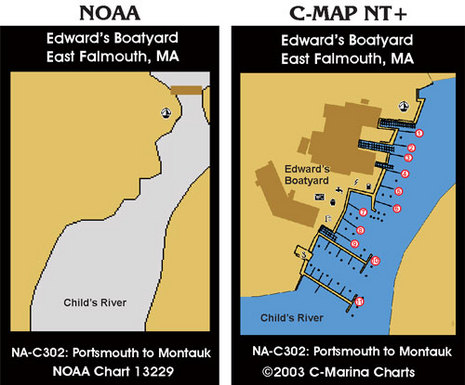