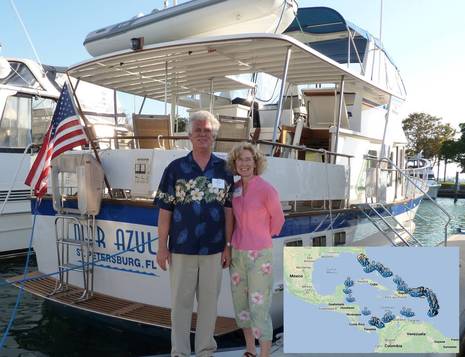 Bob and Elaine Ebaugh did it, leaving Florida in April, 2011, on their DeFever 44 Mar Azul and spending more than two years cruising a big Caribbean loop. Their blog, Mar Azul Adventures, is a good read, but you might miss the fact that during the cruise Bob managed to research, assemble, test and install a 1,200 amp hour do-it-yourself lithium iron phosphate (LiFePO4) battery bank to replace the 12 golf cart batteries they’d worn out. He also wrote a thorough white paper about why he chose DIY lithium and how he put the system together… 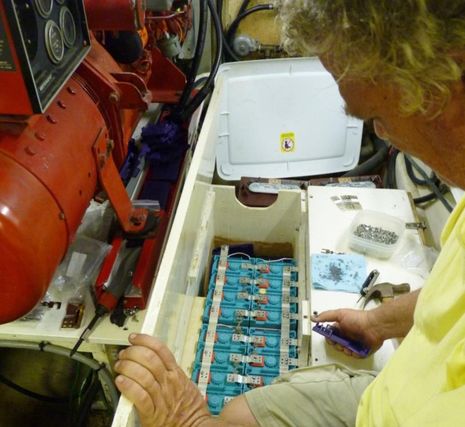 Here is Bob’s lithium battery blog entry, but you really should download the 14-page PDF mentioned there. Even if you’re not ready to build your own LiFePO4 battery bank — and most of us probably shouldn’t at this point — Bob seems to have done a fine job of analyzing the pros and cons of different battery types, particularly for fairly heavy power users like Mar Azul (at 400-600 Ah per liveaboard day on the hook). 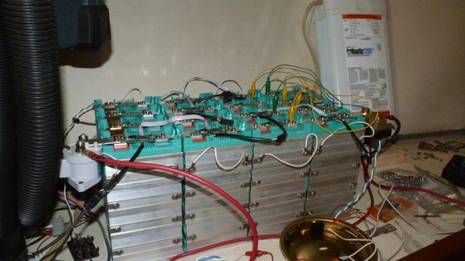 This photo shows the DeFever’s “workshop” (forward cabin). Bob’s first task was to assemble forty-eight individual 3.2V cells made in China by GB Systems into twelve 100 Amp hour 12V batteries, and here I believe he’s bench testing the Elite Power battery management system (BMS) whose components are seen below. His PDF gives specifics about where he sourced the GBS cells and BMS and why, as well as a link collection for further research. 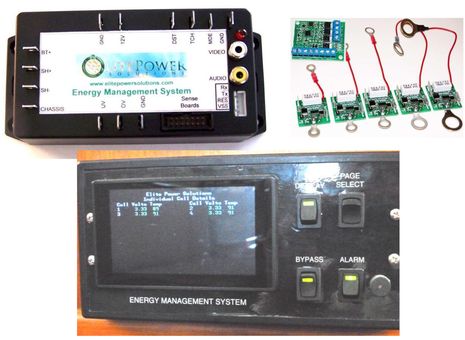 There’s a lot to managing lithium batteries properly, and there’s a definite safety concern. Their wonderful ability to take a large charge quickly, thereby reducing generator and/or alternator times, also means that they can release their charge very quickly, which means intense heat in the wrong circumstances. There have apparently been boat fires that originated in lithium battery banks, though the facts usually seem hard to come by (possibly because most marine lithium installs so far have been high-end projects).

At any rate, I’d suggest that anyone (including myself) who doesn’t thoroughly understand Bob’s well-written explanation of how he set up his BMS, diagrammed above, and adjusted his various charging sources for their new LiFePO4 target should not consider a DIY lithium bank. But I’m really glad that guys like Bob are trying such things and sharing their findings. Note also that since coming back ashore, Bob has been doing marine electronics professionally and hopes to write a Panbo entry about a substantial ePlex distributed power system he’s working on, which will join his earlier pieces on bridging NMEA to Ethernet, his Chetco engine monitoring system, and testing various sat phone systems. Meanwhile, here’s the latest on Mar Azul’s lithium batteries:

The lithium bank is still functioning well. But I have not done any cruising for almost a year now, maybe 2 Saturday nights. I really like the operational characteristics, but the cards are still not all on the table.
About the only thing additional I completed {since writing the white paper} is a benchmark test on capacity. My theoretical 1200 Ah bank is really more like a 1050 Ah bank. So in one year of cruising, theoretically I lost about 15% of rated capacity. What I don’t have is an actual pre-installation benchmark, though the importer suggested that as shipped, and tested the way I did, they would have shown 95% of the rating; so maybe we only lost 10%. We did have 330 cycles in that timeframe.
Some research indicates capacity loss is also very related to calendar life and storage temperature. The end of August gives me another 12 months so I will run another test and see what we have now, with the bank essentially in storage.
There is so much we don’t know. Not only about “life”, but exactly how volatile they are if severely overcharged. This winter, I may buy a few 40Ah cells and do some destructive testing.

RC Collins is apparently also testing lithium marine batteries and he, Bob, and several other marine power luminaries sit on a ABYC subcommittee studying LFP (another name for LiFePO4) battery technology under the chairmanship of Bob’s current boss/mentor Charlie Johnson. Thanks to them all, and don’t we look forward to hearing the results? 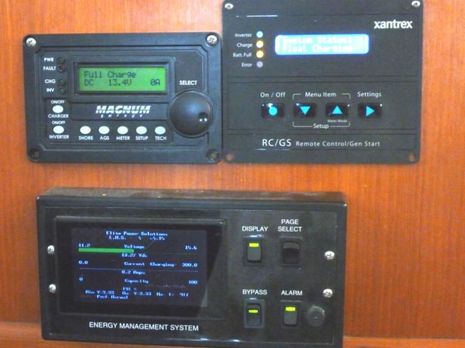