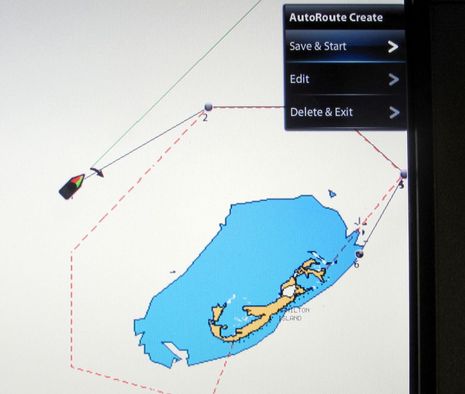 FLIBS was my first chance to see the autorouting capabilities of C-Map 4D in action, and I liked what I saw. And not only is Geonav the first to make the feature available but it’s also the first to enable a similar autorouting feature from Navionics (which I wasn’t even aware of). As with other “Dual Fuel” chart features, Geonav tried to make the interface on the G12 (and G10) the same so that users switching between C-Map and Navionics cards aren’t confused. That’s why the details of the menus above and below are the same no matter which type of chart you’re using…

To create an autoroute you just select the feature off the main menu, put your chart cursor on the destination, and then click and wait a few moments until you get a screen like the one above. What I particularly liked was how easily you can then edit the resulting route, as seen below. Using the joystick you can click through the waypoints — moving, naming, or deleting them as you go — and there’s also a quick way to add a waypoint to a leg (though I don’t remember how).
I can’t judge how well the algorithms used by either Navionics or C-Map calculate the routes because it’s all still beta software (and I saw good and bad results from each). But I did note how the Navionics autoroute system took into account the official “Avoid Area” dashed line around Bermuda (above). And I was told by both chart developers that their route analysis does try to account for navigation aids as well as depths, distance from obstacles, and bridge heights.
At any rate, I’m a long time fan of Garmin’s auto guidance feature even though it doesn’t give you an editable route and it sometimes makes serious errors; it’s still useful more times than not. So I think that even rough autorouting that’s editable will be a hit. And I heard that at least one of these chart companies is working on a feature that could be a real cherry on top: the ability to recalculate best route when you, say, drag a waypoint from one side of an island to the other (like Google maps and others do with highway routing).
It also seems pleasingly possible that autorouting will be coming to other MFDs that can run C-Map 4D or Navionics Platinum+. But it looks like Geonav will be first to support both, starting soon according to this press release. Note too the significantly lower price tags on the G10 and G12. 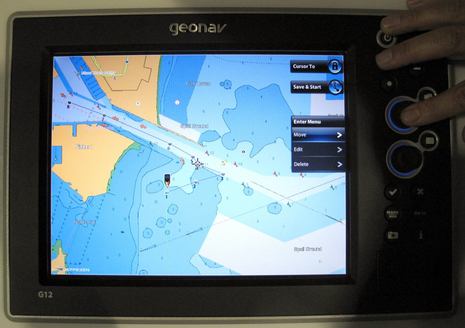 I’ll close with a bonus photo of two dudes cruising Jetlev Flyers near the boat show. You never know what you’ll see in Fort Lauderdale, and that includes the Halloween costumes that stumbled into my hotel lobby at 6 am yesterday morning as I headed to the airport. Good to be back in Maine, about to “party” with my grand daughter. 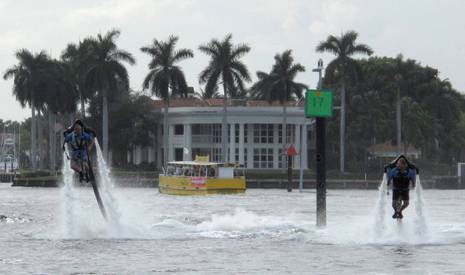