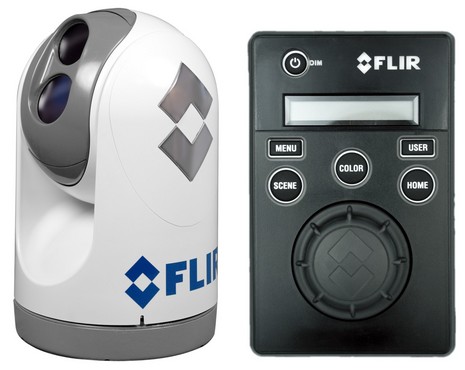 No, the new FLIR M-Series and its controller are not the same size, but here’s my attempted graphic point: That sexy dual-payload pan and tilt camera casing — at only eleven inches tall — is smaller than your eye might presume. While that’s still taller than the competitors’ search light casings, the M-Series can pan +/-90 degrees, has a horizontal swept volume equal only to its seven inch maximum diameter, and it purportedly still fits under most open array radar scanners. FLIR spent a lot of time developing this casing for the mid-size yacht market, and intends it as a platform for future developments, but the big news in Miami was that the initial M-626L model sports a 640 x 480 pixel thermal imager. Now that sounds pretty low res by current video camera standards, but in the thermal world it’s such a big deal that the government puts certain limitations on its use…

By Federal edict a 640×480 thermal camera like the M-636 must be slowed down to a nine hertz refresh rate, or nine frames per second in video talk.  The idea is to make it useful for seeing moving objects in the dark but not quite up to targeting moving objects.  Frankly, I did not notice the slow refresh rate during FLIR’s excellent Miami demo cruise, but the competitors are talking about it.  In fact, even a more typical 340 x 240 pixel thermal cam must be slowed from 30 to 9 hertz if it’s shipped outside the U.S. (though a vessel equipped with a 30 hertz cam can travel foreign).  Everyone has to play by the same rules.  The real news here is hi res thermal at a previously unheard of — though not trivial — retail price just shy of $20,000 (street price better).  That’s not quite the price FLIR was hoping for when I first wrote about the M-Series for a magazine, or I got confused, but it still may be “game changing” for this niche. Four times more pixels does seem to make a big difference, as you can see from my demo cruise photos below. 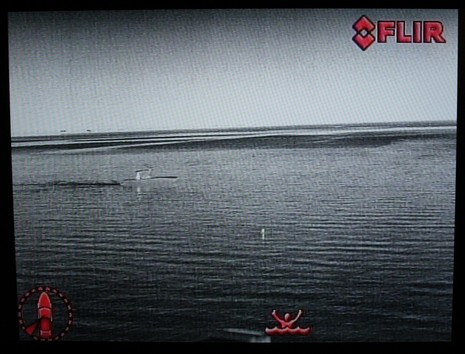 Yes, indeed, FLIR even got someone to simulate a man overboard situation on Biscayne Bay that night. You can see his chase boat and head in the screen above — which is set to white/hot as opposed to hot as black or a range of color palletes — though they were otherwise invisible (as confirmed by Tom Tripp who was also aboard). The pixel count counts even more when you use the system’s 2 and 4x digital zoom feature, or look at a complex scene like this one (which I’ve uploaded an extra large image, which is worth clicking on and scrolling around). 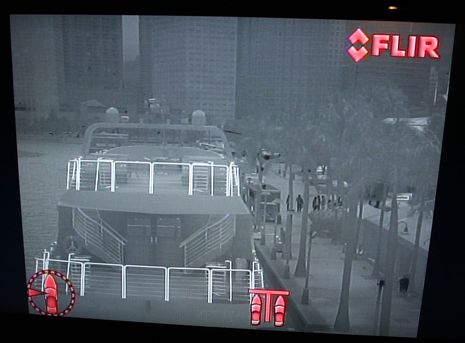 Notice how you can see which distant condos have their heat on (or AC off) and how you can pick out humans amongst the trees, and remember that you would see all this even if the area was dark as pocket. The polished stainless rails on the yacht ahead are particularly interesting. I was told that their sharp, bright whiteness is due to coldness “reflected” from the clear sky. Thermal vision has nothing to do with reflected light, but there are reflective qualities to temperature too.  That’s why the answer to the question “can thermal detect surface water temperature differences (that fishermen are so crazy about)” is: sometimes yes, sometimes no, depending on reflection.  The only trouble with these demo cruises is that the better you understand thermal vision, the more you want to have it aboard.
Incidentally, if you dig deeper into FLIR’s M-Series literature, you’ll find that there is a $15g model with a 340×240 imager. Also, don’t get confused about the M-Series Ethernet abilities. The protocol is used to make installing the controller, or multiple controllers, easier, but the video streams from the two cameras travel over conventional cables not Ethernet. Of course those streams can be split or even converted to digital…probably even sent to your phone.