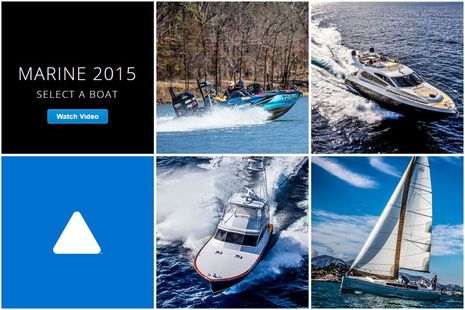 Garmin introduced lots of new products in Fort Lauderdale yesterday along with the promise that all of them will be shipping by mid-February. There’s even a special Marine 2015 website, while this Garmin blog entry offers a succinct overview of the whole lineup. At the press conference the line that seemed to neatly frame Garmin Marine 2015 was “not necessarily ground breaking, but easier to select, easier to install, and easier to use.” I noticed evidence of all that along with a few features that do indeed seem unique and valuable… 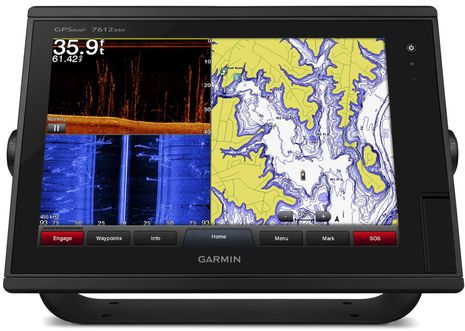 Perhaps the most important new line is the GPSMap 76xx/74xx series, a portfolio of 7-, 8-, 10- and 12-inch displays with the look, feel, and underlying software base that was introduced in the 8000 Glass Helm. So you get features like SmartMode and GRID support but with WiFi and 10Hz GPS/GLONASS built in, and a lower price. Compare a $3,500 GPSmap 7612 with a $5,000 GPSmap 8212 and you might wonder who will buy the latter (but note that the 8212 is almost twice the weight, has more CANbus and video inputs and will still have a place on higher end boats).

Moreover, 76xx/74xx “xsv” models like the one above include built-in sonar and DownVü/SideVü scanning technology, similar to many current Lowrance and Simrad models but with CHIRP and more power. All that simplifies installations considerably, but Garmin is going a step further with combined transducers like this big GT51M-TH thru-hull. Have there ever been combo transducers like these before? There are also new (non-networking) echoMap models with built-in sonar, DownVü, and even SideVü in the 7- and 9-inch sizes, plus a GSD 25 “premium sonar” black box. Sonar is a big part of Garmin 2015, as it is elsewhere, but so far there’s “no comment” on the forward looking variety. 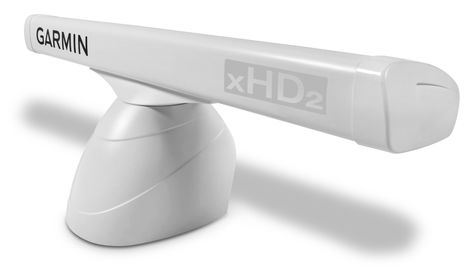 The new xHD2 open array radars may look like xHD but are said to be a complete redesign. They now go up to 6-foot 12kW and have a bird mode that is a prime reason many sportfishing boats have large radars. They also offer dual range, though neither can be overlaid on a chart when both are in use, and you can have two xHD2 radars on the same system. 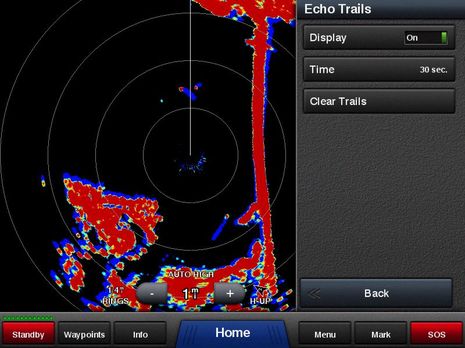 I had to chuckle at the new echo trails feature, though. I’ve been testing a GMR24 xHD radome recently and was surprised it doesn’t have the echo trail option I think I’ve seen on every radar I’ve ever tried, including earlier Garmin models. Garmin’s “Power of Simple” design discipline is generally admirable and effective, but sometimes goes too far. Apparently enough users complained about the lack of echo trails that they’re back, at least in xHD2. (Update 11/1: “The echo trails, bird mode, and dual radar support are all going to be rolled into our xHD dome products in a January software update.”) 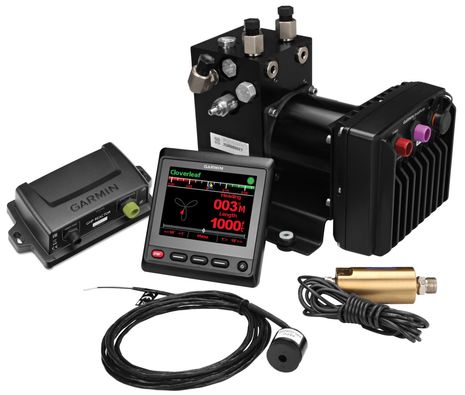 Then there’s the new GHP Reactor autopilot series. One could joke that it was developed in reaction to Raymarine’s Evolution pilot, but that’s a good thing. Gone is the spherical heading sensor, replaced by a 9 axis AHRS that purportedly provides better steering along with easier installation and setup while using less power. Garmin still requires the presence of a GHC control head, at least for the initial setup, but may be the only manufacturer to permit pilot control in their MFD tablet app (and certainly on a watch). 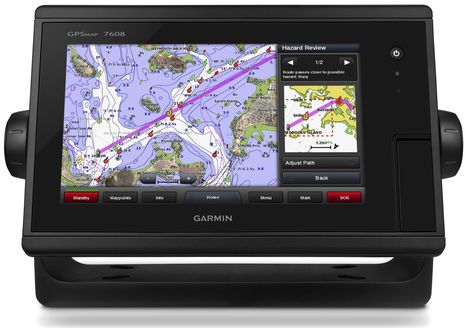 It will be interesting to see how well Garmin’s 2nd generation auto routing feature works now that the guidance generated can be modified. I’ve gotten a lot a of use from the original version even if it was somewhat crude and ignored nav aids, and I’m feeling the same way about the Navionics auto routing now enabled on many Raymarine MFDs. C-Map also can also provide auto-routing algorythms with its charts and I’m hoping for a healthy competition in this area.

I saw some other 7600/7400 software improvements like an improved home page and a neat-looking graphic sail racing start line screen, and I understand they’ll get added to at least existing 8000 models. But the why-didn’t-anyone-think-of-this-before! feature is partially illustrated below. If there’s a Garmin VHF radio connected via NMEA 2000, the SOS button on this 7608 takes you to a list of distress categories like fire, aground, man overboard, etc. In this case I selected sinking and thus the radio has been set up to send a DSC distress message with the specific code for sinking, which is something few people know how to do with their DSC radio even in calm circumstances. Possibly more valuable is the displayed script of the proper things to say once the radio goes from DSC to audio mode. If a Garmin AIS is on the network even your boat’s name and call sign will be filled in, and there other screens available to help you manage a problem.

Congratulations to Garmin on this improvement in safety communications and do you agree that every manufacturer of both MFDs and VHF radios should put this idea high on their developement roadmap? 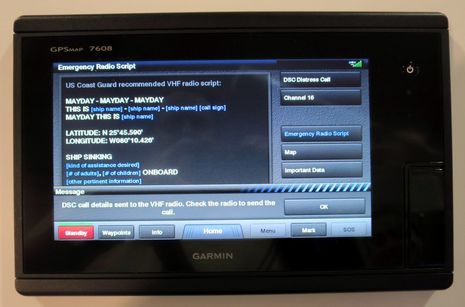