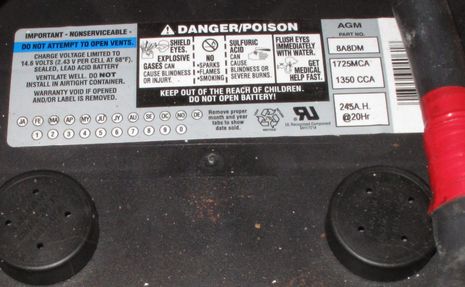 There’s no such thing as a stupid question, right?  Please?  Above is the only label on each of Gizmo’s main bank 8D batteries, and though it says AGM in big letters upper right, I’m not completely sure that they actually are Absorbed Glass Mat batteries.  Can anyone confirm one way or the other?  Then I might have a better sense of how well my battery monitoring system is set up, and what it’s telling me…

Last season I mostly judged Gizmo’s state of stored power using battery voltage, as I wasn’t sure the Xantrex Link 1000 below was showing a true amp hour deficit figure (especially after this forum thread), and was not even sure what the total available amp hours were anyway.  I’m still not sure about the size of my AH bank account, to be frank, but I now think the -230 figure shown below is in the true deficit ballpark as I got it to about zero after extended charging via a Xantrex Freedom 2500 while the boat was hauled.  Typical voltage at this deficit state is 12.45v, though if I run the main engine with its 130 amp alternator, or the 6kw generator, battery voltage will hold for a while at about 12.65, even if I haven’t chipped away much at that deficit.  Any red flags going up amongst the battery cognizanti out there?
The big truths are these, unfortunately:  I know nothing about the history of this battery system prior to March, 2009;  Gizmo’s former owner mostly kept the boat on shore power, anyway;  I almost never have access to shore power, haven’t been cruising extensively yet, and hate running the noisy generator (another issue to be investigated); and I’m pretty dumb about batteries/chargers etc. overall…which is probably obvious.  For instance, am I doing serious power misering at the float just because I don’t run either engine or generator enough, or because neither is charging the way they should?  The alternator seems to push about 60 amps for a brief period, than about 30-40 and the latter about 30.  Would the never-installed battery temp sensor for the Freedom 25 make much difference?
I’ve gotten intrigued with adding a couple of solar panels so I might maintain a near full battery bank and still be moderately profligate with 12v when the boat’s at home on its float.  But I’m also wondering if these batteries may need the equalization I understand is possible with AGM batteries, if they are AGM batteries?? 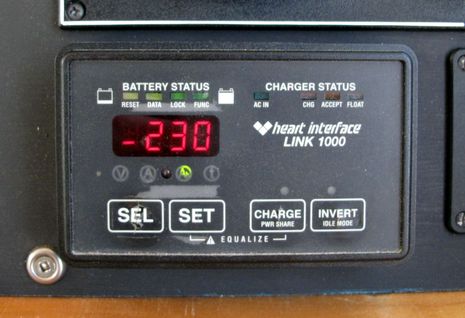 I’m also trying to track down what seems to be a .5 to 1 amp current flow through the Link 1000 when every switched circuit is off but the main battery switch is on.  I’ve found a few unswitched circuits but none tested seems to the culprit.  Can a clamp meter (I don’t have yet) read low enough to help find the amp hour thief?  Also, if I cable whatever solar charge controller I get through the shunt below, will I be able monitor its output via the Link 1000 and its own monitor?  Sorry to be a font of possibly dumb questions — and promise to write about something I know more about soon — but, then again, I suspect a lot of Panbo readers are, like me, more tuned in to their electronics than the electricity needed to run them.  Guidance will be appreciated from those of you who have figured this stuff out. 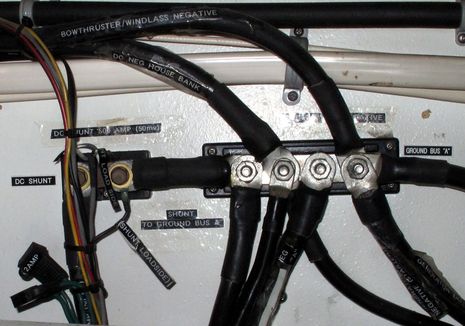