Gizmo fixed, thanks to a crack mechanic/technician 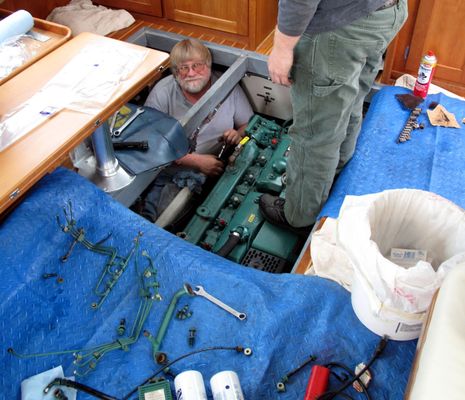 That big fella scrunched alongside Gizmo’s Volvo Penta diesel is the new love of my life!  It’s hard to imagine a better engine guy experience than what I got last week from Pat Ricci, proprietor of Thomaston Boat and Engine Works.  When I called him on Tuesday, after Monday’s somewhat traumatic break down, I knew there was a major fresh water coolant leak somewhere around the exhaust manifold, and an engineer/sailor friend who’d had a look predicted a two phase repair — dissemble and diagnosis, then parts ordering and repair — that would total several days labor and several large boat bucks.  But Pat did the diagnosis right on phone and said he’d order parts and do the whole repair in a half day, soon.  Which is exactly what he did, and more…

Volvo Penta only built Gizmo’s TAMD74C-A for two years  — 2000-2001 — probably because it was a steep part of VP’s transition from “conventional” marine diesel design to the thoroughly electronic engines of today.  Pat seems to understand this overall transition deeply, as he was running a big marine engine shop in South Florida and watching how his work evolved from primarily mechanical to primarily technical.  “Not everyone made the change smoothly,” he says (which is something I’ve wondered about during engine repairs on prior boats).
But Ricci sure did.  After carefully and efficiently doing all the wrench and socket work needed to replace the failed O ring, he hooked up a PDA with a special dongle to the engine’s diagnostic port and we took a test ride.  I’d fiddled with that port last summer, trying to sniff out the J1939 CANbus messages I was hoping to convert to NMEA 2000, but I should have called Pat first.  He knew that this particular model only talks via an earlier serial protocol (hence the short production run?), plus he knew how to manipulate the VP software to review the engine’s alarm history, download and clear the codes, and log details of our ride.  That log includes fuel flow rate information — which Pat thinks is quite accurate (remember that discussion?) — and I very much look forward to putting the data into an RPM/speed/flow spreadsheet I can use to understand better just how my cruising strategies relate to my wallet (and carbon footprint).
On top of all that, I was impressed with how Pat treated his young assistant Justin (unfortunately cut off at the waist in the photo above).  It seemed like an informal master/apprentice relationship, and in a warm way, with lots of give and take and mutual appreciation.  So by Friday afternoon, Gizmo’s engine running like a top, I’d concluded that Pat Ricci is an outstanding mechanic, technician, and mentor — and a business man who does what he says he’ll do — and I’d recommend Thomaston Boat & Engine to boaters in mid coast Maine needing help with any of the many engine brands he covers, or for repowering (Pat has a shop that can accommodate boats up to about 50 feet).  Of course there’s self interest involved; I want him to make a good living and stick around, at least until Justin becomes a master mechanic/technician himself. 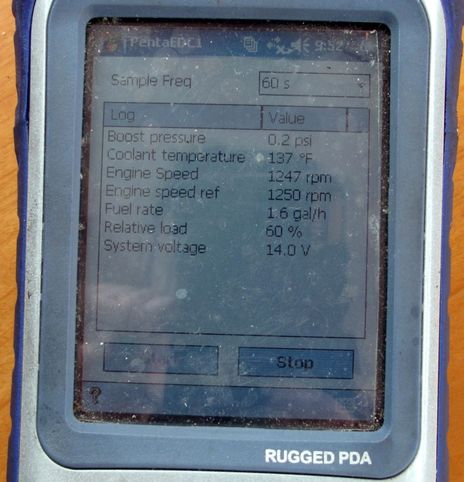