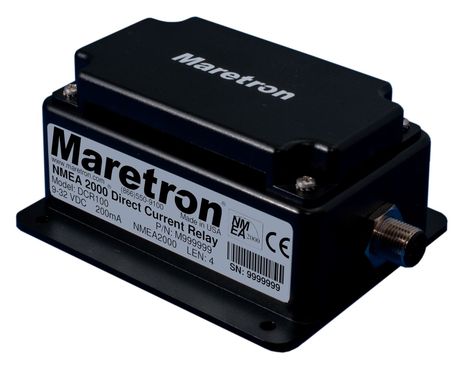 Maretron’s new DCR100 DC relay box will not create a true distributed power system because it doesn’t replace conventional circuit breakers. But it can give you some of the features — like extending switching to an N2K network and beyond, and the ability to measure and alarm current flows — and it seems like it would it be easy to retrofit to existing boat panels…

As suggested in the install diagram below, the $395 DCR100 module contains six solid-state relays, each able to handle a load up to 10 amps, and it sits between your circuit panel and whatever resistive or inductive loads — lights and motors — you’d like to control via N2K. In fact, I’m pretty sure it was a prototype DCR100 controlling the engine room light in Flordia that I got to switch on and off from Maine via an N2KView app running on an iPad. Of course that sort of remote control requires a boat-network-to-Internet connection like the Maretron IPG100 discussed in February (or maybe the Chetco SeaSmart, or a future version of Garmin’s just introduced GDL 40), but I can imagine lots of uses for the DCR right on a boat.
For instance, I’d like flying bridge control of Gizmo’s exterior lights — particularly the bright LED floods, which can instantly and effectively say “Yo, I’m a boat over here in the dark.” With the DCR100 and a networked display or switch panel that can run it well, I could not only get this ability without running more wires, but I could possibly reduce the wiring mess at the lower helm, and I could be informed if, say, a running light burned out, causing that circuit to draw less juice… 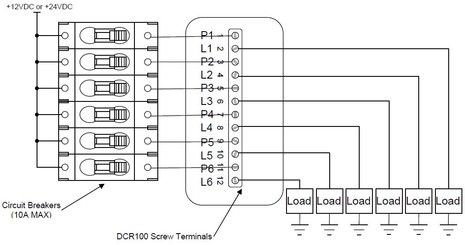 Naturally the DCR100 can integrate nicely with Maretron’s own N2KView Platinum monitoring and control software, or a DSM250 display, but its support of standard NMEA 2000 messages is confusing. According to the manual, the module does transmit the Binary Switch Bank Status message (PGN # 127501), but it uses a proprietary PGN to report on each load’s current (and another proprietary PGN with lots of configuration options). And there’s no mention of the Switch Bank Control PGN (127502), which is described in the NMEA database as “universal commands to multiple banks of two-state devices.”
Well, it turns out that the NMEA is still working on a complete set of power-related PGNs and also that manufacturers like Maretron and EmpireBus (discussed here recently) are using the Command Group Function (PGN 126208) to command the Binary Switch Bank Status PGN 127501 to the desired on or off state. Maretron CEO Rich Gauer tells me that this is a more intuitive and efficient technique supported by NMEA and that the Switch Bank Control PGN was “created by accident not realizing that commanding the existing Status PGN 127501 was the preferred method.”
At any rate, it is possible for devices or programs not developed by Maretron to run a DCR100 switching module, though I’m not sure any exist yet and there are niceties like system labeling (what a switch does, for instance) that Maretron seems way ahead on. Incidentally, use of that Command Group Function 126208 is why Maretron devices can now configure certain Airmar sensors (hurray for the cooperation between these two competing companies, PDF details here).

Maretron also just came out with the NBE100 Network Bus Extender, which seems quite like the N2K Bridges we discussed in December. And indeed it does isolate impedance issues and power between two or more backbone sections — and can thus provide redundancy and increased reliability — but Maretron is emphasizing the fact that such a bridge can also double the permitted size of a NMEA 2000 network in terms of backbone length, cummulative drop lengths, and number of nodes. Or two NBE100s can triple it! Some backbones are going to need extending once power — either full on distributed style or just switching — is added. 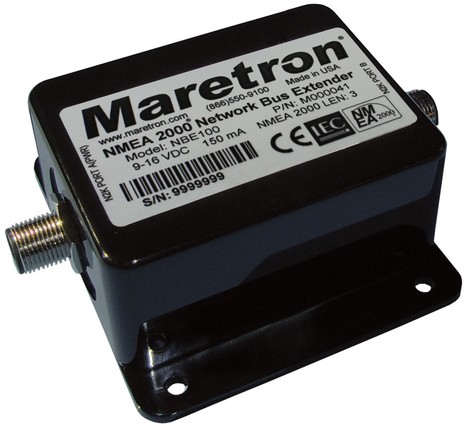