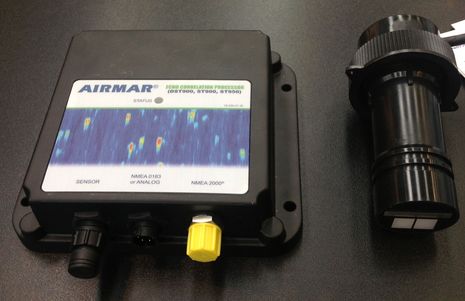 As my first, and hopefully not last, series of entries under my own name I’d like to report on my visit to the METS 2012 trade show. If I had to call an overall theme then it would be touch screen chartplotters and the increase in companies working on Lithium batteries. I counted 5 companies offering these, and I probably missed a few. Last year there were few touch chartplotters and this year the Big Four all had lots of them, and there was a little surprise as well with a new range by a company I’d never heard of, Lorenz of Italy. Let me start of with some good Airmar news, the first highlight of the show for me…

Airmar has restarted development of the DST-900 that was put on hold in 2009. My guess is that the CHIRP transducers were considered a higher priority, and that the development work on CHIRP is now largely done. I was shown a dummy of the sensor and the interface box (seen above). Note that it is absolutely not ready yet, but that they plan a full announcement for the Miami boat show in February 2013. For folks that missed what the DST-900 is about: It is a Depth/Speed/Temp sensor that works without a paddle wheel. Panbots the world over are dreaming of a speed sensor that works for months on end without fouling up.

Technically the DST-900 is going to measure depth using ultrasonic waves that sample at between 25 to 1000mm depth, apparently automatically looking for the best reading out of several sample depths. It will calculate speed 10 times per second, so it can satisfy the racing crowd as well. The average power consumption is rated 125 mA @ 12 V.

The other highlight to me was a peek at the coming Mastervolt QBox. This device is intended for mid-sized yachts and can function as a complete solution for all power conversion on board. It has a combined charger/inverter with two AC inputs — like from a generator and shore power, for instance — plus a max 50 V MPPT tracking DC input for 500 Wp or less solar power as well as a secondary DC input for a wind generator, and two AC outputs. More on this later, but here is a picture that shows all the connections you can make: 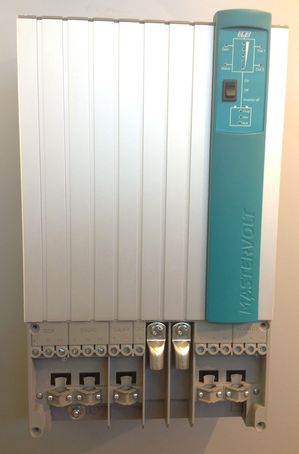 Now here’s a roundup of the MFD manufacturers — the big four plus one.

Furuno
No news was expected from Furuno after the FLIBS showings and this was true. I saw prices for the black box TZT which I’m leaving to Furuno to publish, as I forgot to ask whether these were the retail or end user price, but I can say that the TZT BB — which includes the remote power button and SD card slot seen below — is going to be similarly priced to a TZT14 MFD. 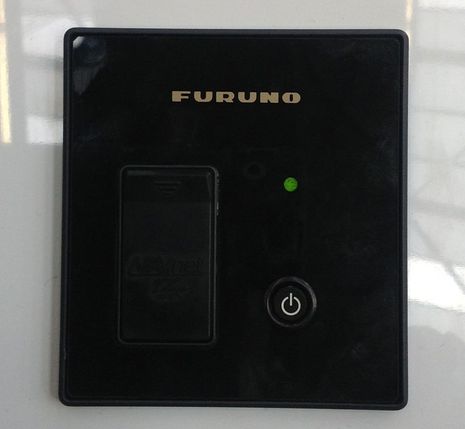 Garmin
Ben reported on the new GPSMap 700 and 500 series a few days ago. They were shown on the show but they were not powered up. It looked to me the models on display were just dummies, which makes sense as the introduction date is still a few months away. 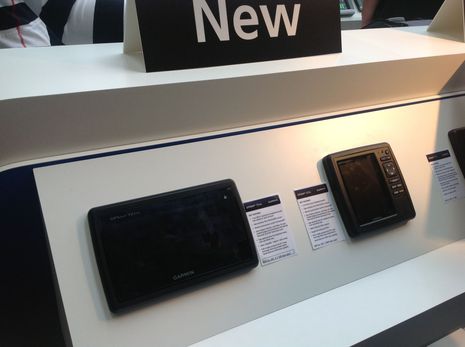 After announcing Lighthouse 5 and upgrading the navigation displays to “i” level it seems that Ray was out of news for a change! No problem as their entire lineup is now completely redone. Someone did ask me to check for an interface box between “Ray wireless” (TackTick) and SeaTalk, but apparently this is not in the pipeline. I went away with the feeling that they are going to keep these ranges separate for a while and that their thinking is that these cater to a different market. My personal belief is that there are a lot of sailors who’d love a wireless wind wand! 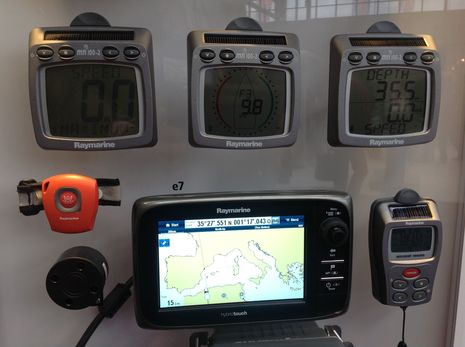 Unlike the other three Navico had quite a number of novelties on display, even after the HDS Gen2 Touch introduction a few months ago.

I have to admit that I have a personal interest in how the HDS Touch screen would look and perform, as I’ve pre-ordered a 12″ to replace my “old” HDS 8 since I want to start developing some GoFree apps!  Let’s hope the development cycle slows down a bit again, as I don’t fancy renewing $3000 kit every other year! I must say I am impressed with the new user interface, which was fluent and easy to get used to. The 12″ touch display is only a little bigger than the older 8″ and of course much much quicker. I do hope the shipping version will have a better plastic trim round the display as it looked a bit shiny on some of the demo models on display. In fact the smaller H2T (hey, if Ben can write TZT BB then H2T isn’t that bad is it?) 7″ and 9″ models didn’t have this issue, so I am hopeful. Once I have my own display I’ll produce a full review here.

As to GoFree there was no news beyond what was already discussed here. As a side note, I’ve been looking at the GoFree Developer Toolkit and it looks really well thought out and easy to implement for a software developer. They offer the small developer a way out of needing access to the NMEA 2000 specification, if they are willing to stick to Navico equipped boats. Maybe some of the competitors will implement GoFree as well to get us out of this conundrum? 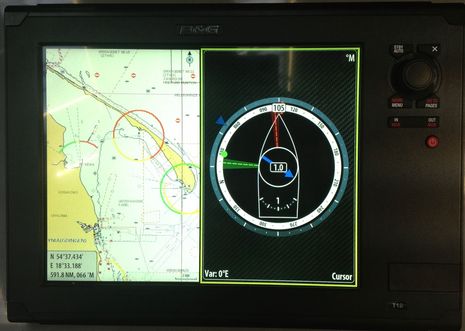 There was news for the B&G brand as well, announcing Zeus Touch and Triton HV displays. These are easy to explain: the Zeus Touch is a Simrad NSS with added software catering to regatta racing sailors, and the Triton HV is a rework of the existing HV displays with a NMEA 2000 interface instead of the B&G Fastnet on the existing displays.

I also got to handle the new Lowrance and Simrad VHFs, as Ben has just reported.

And now for the surprise. Now that Humminbird has announced that they are going to drop the GeoNav brand for a while, it looked as if the above Four had the market almost to themselves. Interestingly enough there is an Italian company Lorenz that is starting to make really interesting chartplotters as well, or has at least started marketing them outside Italy. 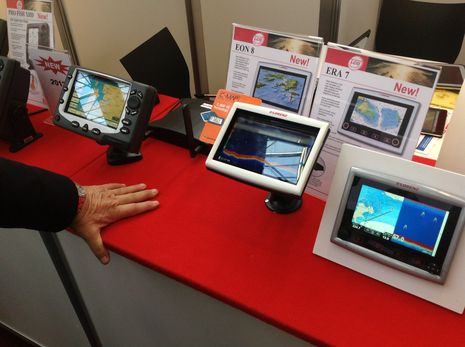 Their new offerings are the EON 8 and ERA 7, which have two interesting characteristics — they are multi-touch, which apart from Furuno TZT and the just-announced Garmin 700 Series is unique for now, and they offer high resolution in a very small package. Lorenz plans to develop 3 options: the EON 8 which is completely touch, the ERA 7 with some buttons, and an unnamed version with full buttons. These plotters will have NMEA 2000 and 0183 interfaces, as well as an iPad app that allows you to view the navigation data. We’ll have to see how this plays out but it looks as if this could develop into an interesting alternative to the bigger vendors. 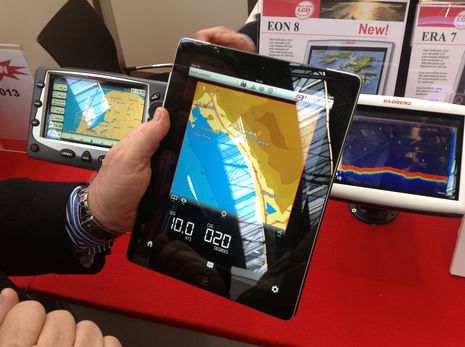 That’s it for now. Stay tuned for part 2, where I will report on the various NMEA 2000 and power oriented vendors.