Please don’t jump to conclusions about this first real slice of the finished Panbo/MTA survey until you better understand what it represents. The questions quoted at the top of the table above were “open ended”.  The 950 people who spent time taking the survey (thank you all!) got no check box type guidance toward their answers.  In fact, no brand names were specifically mentioned anywhere in the survey.  So the 1,558 positive responses, along with the 773 negative ones, are purely the brand names that came into those many minds when asked in privacy which marine technology products had either pleased or displeased them. The individual response totals then are a mix of at least three factors:  market share (how many of the survey takers own, or have owned, some of a brand’s products); brand awareness (most may remember whose MFD they use, but not necessarily whose inverter); and brand perception (the emotion that brings a brand name to mind).  And there are more complexities beyond…

Note, for instance, that seven of the top ten brands that pleased survey takers are also amongst the top ten that displeased them!  This is obviously a function of market share, at least in part, and I think it also confirms the dubious nature of dock reputations.  If someone tells you that brand “x” is crap, remember that there’s someone else who loves it.
And while there are some striking differences in the relative positive and negative counts, don’t jump to conclusions there either.  Yes, Raymarine decisively topped the negative list, but note that only 172 survey takers account for that distinction while a majority of 189 cited Raymarine on the positive side.  Note, too, that Raymarine got the largest total response, with over 15% of all 2,331 brands named.  That speaks to the argument that Raymarine owns so much brand awareness that someone will surely buy the company.  But that someone may surely want to understand better where the negativity is coming from, and MTA is ready to help.
The more I work with them, the more I realize that the MTA guys take the same careful, nuanced approach to numbers like these as the best navigators take to their data, always looking for ways to cross check for more detail (and to catch wrong assumptions).  They could, for instance, tabulate the Raymarine numbers against other questions answered by the same individuals, compiling profiles of the sort of boaters that the company is pleasing and not pleasing.  But just adding up all the open-ended brand answers took a lot of work, and more detailed data diving and analysis is what MTA should be paid for.
To recap the survey history so far:  I introduced it and MTA in early February, we got a taste of dealer preferences a couple of weeks later, then of buying plans as the survey wound up, and I finally I tapped into some survey demographics for my recent blogging birthday celebration.  There’s lots more data I can share over the coming months, and tons MTA can offer interested companies, but I’ll finish up today with a few more points about these brand results.

*  Note as you look further down the totals list that a few name issues pop up.  For instance, B&G’s ninth place on the table above isn’t quite right because six more survey takers cited “Brooks & Gatehouse” on the positive side.  MTA explained that while they would correct such problems — also seen with Rose Point and CE, and with Navico and its various brands — in a more finished table, this raw data usefully indicates a little brand name confusion.

*  I did the total response rate calculations for most of the other top ten brands and got Garmin at 13.5%, the four Navico brands at 11% total, and Furuno at 10%, along with Icom at 9% and Standard Horizon at 6%.  That makes a fair bit of sense to me in terms of brand awareness, and indicates a nicely balanced competitive landscape, I think.  And how about congratulations to ACR and Blue Sea for making it into the top tier on the positive side?

*  Of course Garmin deserves a big hand, too, and that’s wonderfully timely for me.  Maybe they’ll have a red carpet and a
band when I arrive at their Kansas headquarters tomorrow morning!  But I’m just the messenger;
in fact, my opinions don’t even appear on one of the 950 surveys
tabulated (I only worked with the draft version).  I couldn’t have guessed these lists very exactly either, and I’m very interested to hear how you all react to them (I think ;-).
But while I think the lists represent the cleanest and most detailed research into marine technology brand qualities that I know of, let’s all remember that they only represent 950 minds recollecting experience with stuff they’ve already used.  In fact I’ll close with one of many interesting responses to another open-ended question that followed the ones above.  It was “Do you have any additional Brand Selection comments?” and this particular survey taker managed to strongly express both how personal these opinions are and the danger of giving them too much weight:

“Brand is, essentially, worthless.  Furuno was a great brand but I would never buy a NavNet3D solution today.  They abandoned the small boat market.  Anyone who shops brand is an idiot – you have to reevaluate every product offering whenever you make a purchasing decision.  Anything else is just self-delusional.” 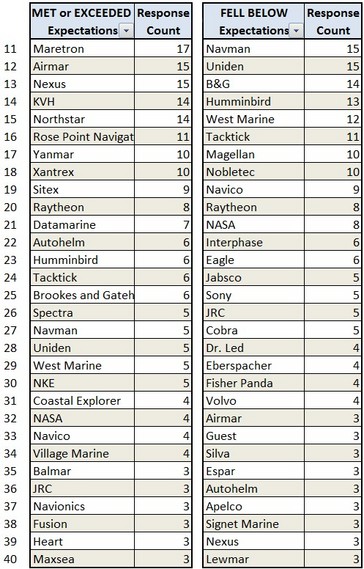