Discovering that my old Garmin GPS 45 still works was especially nostalgic because Gizmo and I were returning from WoodenBoat School, one of the first places I used it 25 years ago. Many memories that far back are foggy, but it’s easy to recall how much this wonderful gadget helped me to stay safe and relaxed even when trying to teach beginners how to sail and navigate in big tides, cold water, and real fog.

This handheld also played an important role on many yacht deliveries and pleasure cruises, and while getting reacquainted with the old 45’s talents, I thought about how complex today’s MFD chartplotters have become, even though they’re also much better nav tools. I suspect that I’ve understood evolving marine electronics better because I started navigating before they were omnipresent — another good reason to take the WBS nav course I was assisting — and so maybe there’s value in a closer look at that transition period between paper and electronic charting. At some point in the early 90’s I had briefly experienced navigating with the first handheld GPS, a white brick called the Magellan Nav 1000 that “ran for a few hours on six AA batteries, and sold for $3,000” (according to this excellent early GPS history).  Thus I learned early the high value of reliable electronic position finding — even at the 50-meter Selective Availability accuracy then mandated — and was quick to purchase the Garmin GPS 45 when it came out in early 1994 for about $400.

At first, and especially in open boats, that cloth case (with custom neck strap) was handy for taking a position fix — either latitude/longitude, or the bearing/distance to a waypoint — directly to a paper chart. But on bigger boats, I eventually figured out how to wire the cradle’s NMEA 0183 data port to a laptop running one of the first charting programs (Nautical Software’s ChartView, long gone but not forgotten).

So by the late 1990’s the Garmin 45 took me to the wonders of constant GPS plotting on an electronic chart, but let’s look at what it could do on its own (although I have no intention of going back). 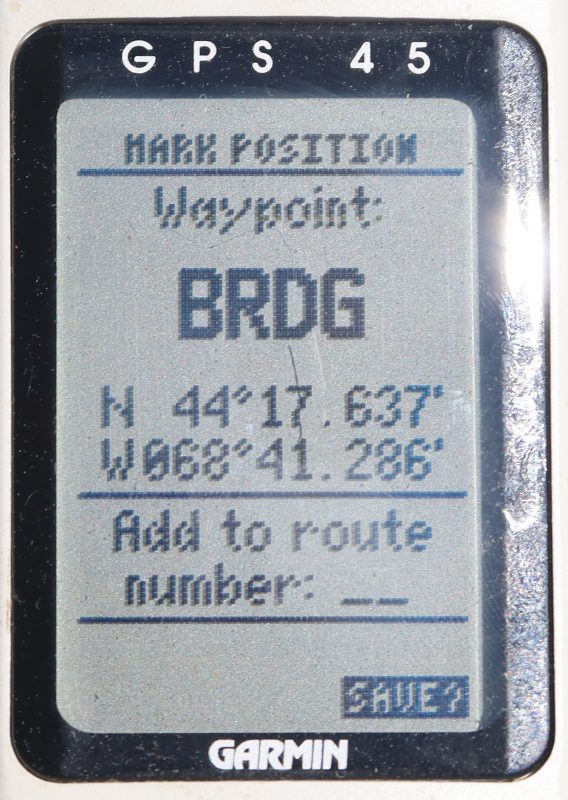 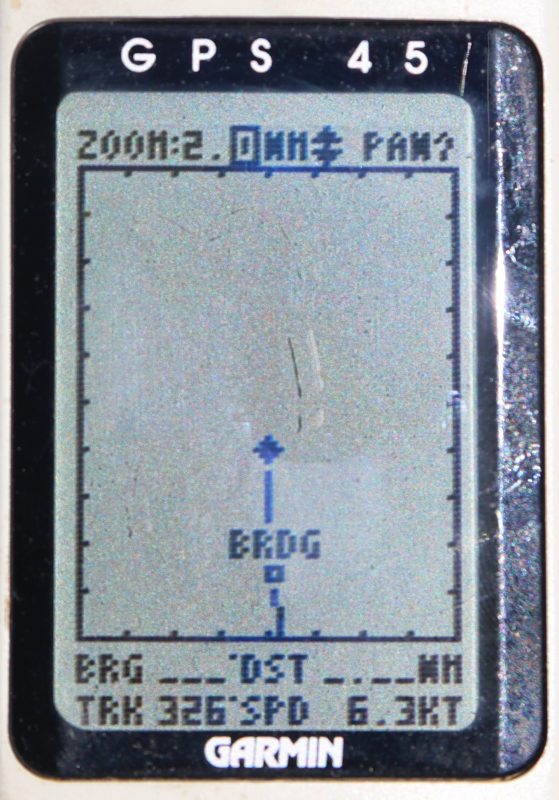 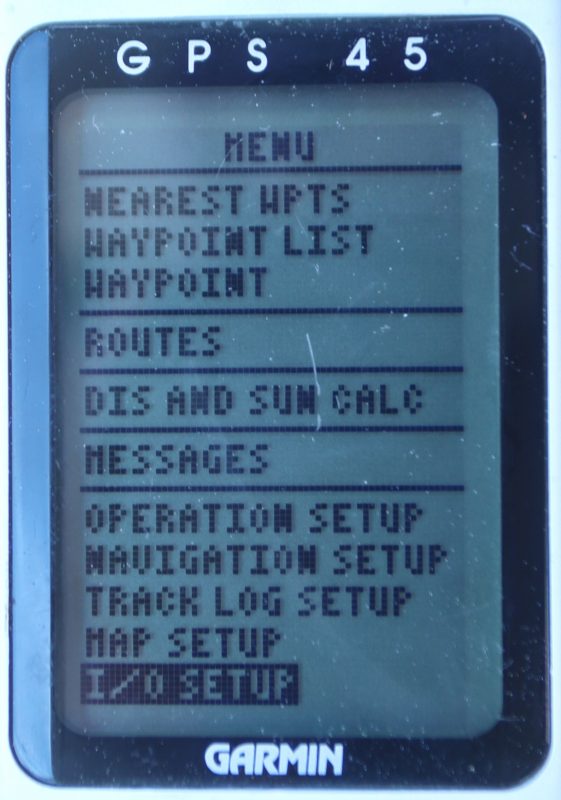 The 45’s Mark button was an easy way to create a waypoint when you were actually on the spot, and that’s what I did as Gizmo passed under the (still-standing) Deer Isle Bridge. In retrospect, I should have entered a more descriptive 8-letter name, but using the 45’s up/down keys to scroll through the alphabet is tedious, and entering a lat/long position for a distant waypoint involves even more finger exercise.

Back in the day though, my fingers were busy because a waypoint set as a “Go To” with constantly updated bearing and distance was the cat’s meow. It was much easier to correlate with a chart and the real world than changing lat/long positions. Also, well-named waypoints (and past tracks) could make the Garmin 45’s otherwise minimalist Map Page quite useful.

Incidentally, in 1984 I sailed transatlantic with a Transit satnav system plotting on an electronic chart, but it was exceptionally exotic yacht gear and still only delivered fixes every two to six hours. I also used fixed Loran A and then C devices on various vessels — though I missed the “first chartplotter” — and while Loran C was quite good at returning to previously captured waypoints, it was especially dicey at calculating lat/long positions along the hilly coast of Maine. (And we’re still wasting the chance to improve it.)

In short, the inexpensive, portable, and relatively accurate Garmin GPS 45 was a true game changer. But is it really working properly 25 years later? And what does marine navigation accuracy really mean anyway? I checked the 45 against various modern GPS sources like the 56-channel receiver (with WAAS, EGNOS, and MSAS SBAS) built into Gizmo’s Furuno TZtouch2 MFD with results seen above on their FI70 display. The old Garmin’s eight channels with no Satellite Based Augmentation is consistently about this close (with a good sky view), which is darn close since the 0.002 minute of latitude difference is only 0.002 nautical mile off, or about 12 feet / 4 meters (using the 1929 international nm definition).

Also qualifying for the “Earth math we used to know” category: the 0.001 minute of longitude difference is even more accurate than it looks because 1 degree (60 minutes) of longitude at 45N equals 30nm while 60 minutes of latitude is always 60nm. And remember that errors this small are exceeded by pencil dots when using paper charts, and almost all charts are still based on old-time expectations of accuracy (see Zones of Confidence).

Meanwhile, the Garmin 45’s Speed Over Ground (SOG) was usually within 0.2 knots of the modern high-performance GPS competition, and they’re all better than most paddlewheel speedos then or now — let alone a taffrail log — with SOG already corrected for the set and drift we once had to guesstimate.

But the 45’s calculated Magnetic Track — now called COG (Course over Ground) — seemed to be consistently wrong by a few degrees, and the reason became obvious. 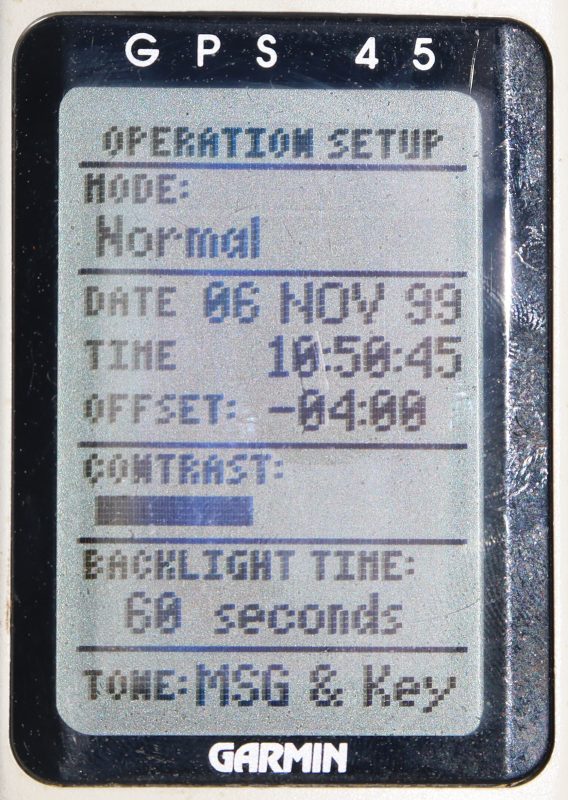 Wrong date in 2019 could also be a magnetic variation problem? 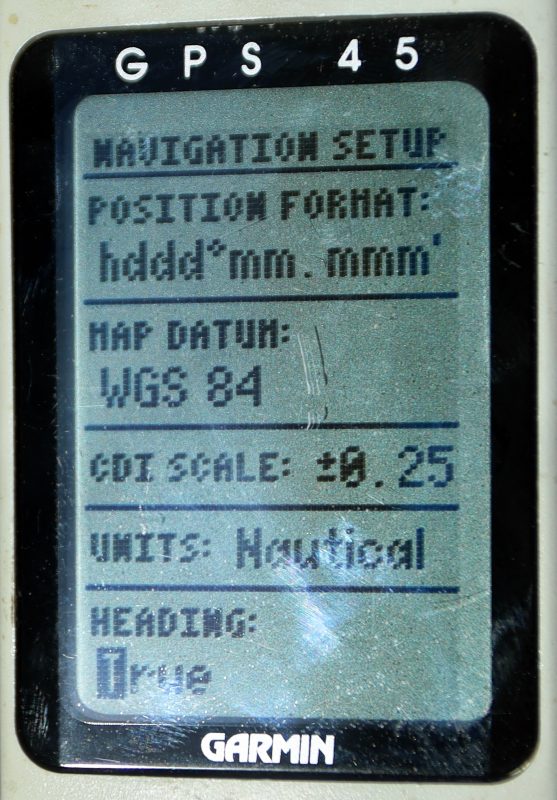 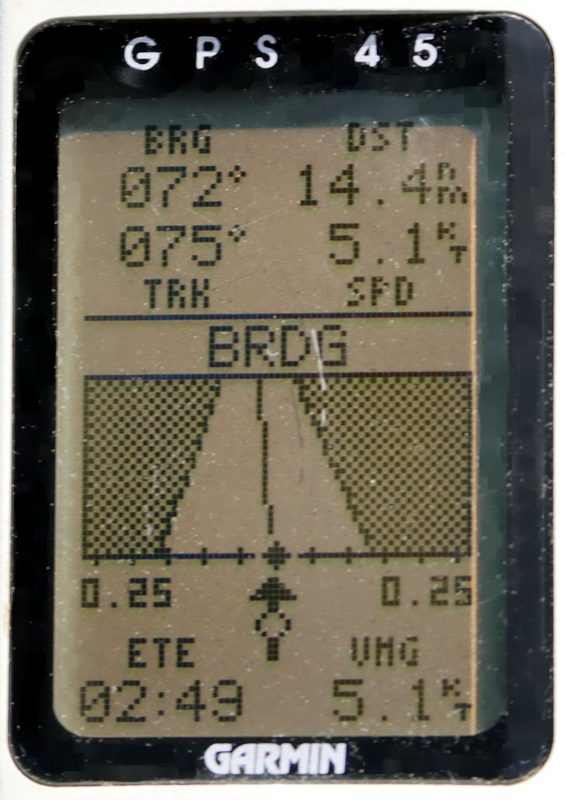 BRG and TRK (COG) are true when set to True

Indeed, on June 22, 2019, the Garmin 45 thought it was my birthday in 1999 (today it reads November 22), and if you do the date math that’s exactly 1,024 weeks ago. Which is the infamous GPS date rollover number, due to an overly short data field as Ben Stein explained.

Now recall that Earth’s variable-by-region Magnetic Variation changes slowly over time, and that the World Magnetic Model is somewhere in your marine electronics. And incidentally, a manual True to Magnetic correction was part of my likely most dangerous navigation mistake, and — while the recent GPS rollover didn’t seem to cause much boating trouble — it and human error apparently did take out the NYC municipal wireless network.

At any rate, the second screen above shows how I changed the Garmin GPS 45 “Heading” type — which should read COG/BRG, not Heading, because they’re quite different, dang it — to True. Then the BRG and TRK (COG) values to the Deer Isle BRDG were correct on that final Waypoint Navigation Page that I used to value so much. Finally, judging from all the Garmin GPS 45 eBay listings, mine is not the only one still working. Hat’s off to Garmin for that, but for goodness sake don’t buy one for navigation. Besides the issues already detailed, and maybe others I haven’t realized, it’s a pretty crude machine by today’s standards. The 45, for instance, can’t keep a fix at Gizmo’s lower helm though both inReachs do fine (even though their main task is two-way Iridium communications, more on Mini soon).

But I can see acquiring a GPS 45 as a key bit of electronics history, and you might appreciate the 1990’s Garmin GPS 45/40/38 FAQ — the work of many users comparing notes — and/or a visit to Retro GPS.

Speaking of retro, note the just announced Ocean Global Race that will honor the original 1973 Whitbread around the world race by doing it again without GPS and lots else. Maybe we should be taking GPS holidays on the water like some folks regularly turn off their cell phones for a day?