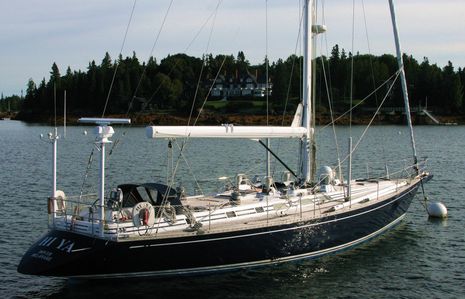 This was my view from a borrowed mooring on Saturday night, and it was quite a nostalgic one as my one and only transatlantic was sailed aboard this very same Nautor Swan 59 from the Canary Islands to Martinique in December, 1984.  It’s hard to believe how very techy the boat’s electronics seemed at the time, how much they’ve changed since, and yet how old school they look today…

I wish I could remember the details better, or was still in touch with the owner, but the boat definitely had the first satellite navigation system I’d seen.  It was no doubt using the Transit system and only got a position every two to six hours as I recall, but it did put that position on some sort of very expensive electronic plotting gadget built into the surface of the chart table. Can anyone guess what that may have been?
Meanwhile the three professional watch captains aboard (if you count me) taught the owner’s party celestial nav.  Not that you really need to know exactly where you are when crossing an ocean…until you get to the other side.  I learned how to make French bread, but I wouldn’t know where to start now.  We celebrated Christmas in mid ocean and my girlfriend of the time managed to fashion quite an elf outfit largely using some sort of silvery paper that came out of the weather fax machine, I think (memory fails).  We crossed in slightly less than 14 days and never had wind forward of the beam until we beat into Fort de France on flat water on New Years Eve.  That’s when the owner whipped out a night vision monocular (probably from ITT) that left green trails behind whatever it imaged, but was still incredibly useful for finding unlit marks (and later for spotting kids paddling out to us as we approached Dominica in pitch dark).  Just after we anchored, they set the fireworks off.

During that trip, the owner struggled with the SSB High Seas system to stay in touch with family ashore and also to keep an eye on a late forming hurricane.  Now the boat has a KVH Tracphone 25 Mini-M system mounted on the mast (high, and out of the shot above) and probably more modern sat coms tucked away below. I was completely out of touch, except for an occasional port pay phone (also a struggle).  As you can see below, we did have some sort of radome on an aft post — in fact, there was enough stuff back there that we jokingly called her an “antenna powered Swan” — but that old open array radar seen above came later, as did the Raytheon radome on the mast.  I peeked into the cockpit as I exited the mooring area and saw an old Pathfinder screen at the helm.  She’s still a beautiful boat, but could use a fresh set of electronics 😉 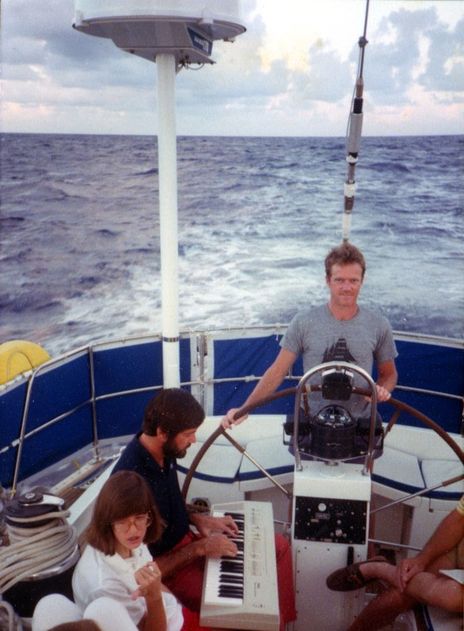