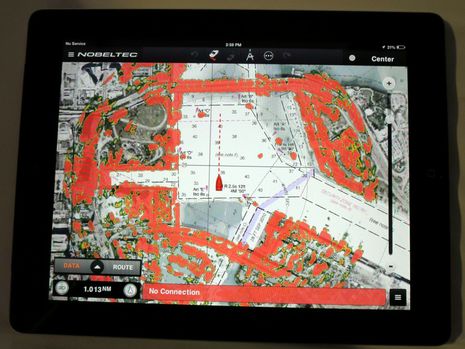 Yes, iPad navigation fans, that is Furuno 1st Watch WiFi Radar overlaid on the Nobeltec TimeZero charting app. I wasn’t even sure that an iPad could overlay radar over a simple vector chart, but here it is over a finely rendered raster chart blended with hi-res satellite photos. This is virtually the same mix of navigation data that I’ve found so useful on a Furuno TZT and the short demo file I saw running in Fort Lauderdale suggested that it may pan and zoom (and even go 3D) almost as smoothly on an iPad. It’s a major advance in tablet navigation, I think, but the TimeZero app update coming next spring has more to brag about…

The Nobeltec announcement that went online today is titled TimeZero App Compatibility with FURUNO DRS4W Radar & AIS, but there’s actually more to it than that. After the update the standard version of TimeZero — which already impressed me and costs $40 to $50 depending on the (large) chart region you choose — will be able to receive some basic boat data like GPS and Heading coming over WiFi. (And they hope to give TZ the ability to accept and display more basic data like Depth, Wind, and Temperature eventually.) Buy a $10 add-on software module — right in the app, just like you buy the charts — and TZ will also display AIS targets coming over the same WiFi connection. Finally, if you have a Furuno DRS4W radar, a $50 module enables overlay and full radar control.

The diagram above shows how you could use all of TimeZero’s new capabilities at once. The 1st Watch Radar with its fixed WiFi name (SSID) and password acts as the central access point, so whatever WiFi bridge you use to send out Heading, AIS, etc. from the boat system must be able to join a network, not just create one. But this feature is becoming more common, like with the Vesper XB8000 AIS transceiver that has recently been distributing AIS, Depth, Wind, etc. via Gizmo’s own WiFi router. At any rate, picture the above diagram with a Vesper bridge/transponder plus a few sensors and instrument displays. I see a pretty powerful yet economical navigation package running on the two iPads a DRS4W will support with no MFD onboard. I’m not saying I want to go that way myself, but some boaters do, and this is exactly the scenario that Furuno’s standalone WiFi Radar concept seemed to hunger for. (Note that Furuno and Nobeltec do have a relationship.) 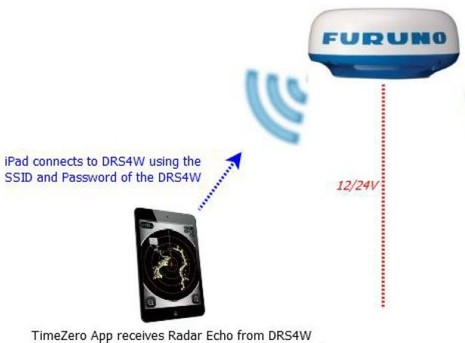 It’s also possible to use the TZ app simply with the WiFi Radar, as Nobeltec says the overlay will sync to charts OK with COG (Course over Ground) instead of Heading if you’re going over 1 knot. They highly recommend Heading, though, and apparently the compass built into iPads isn’t up to the task.

A third possible diagram would show the iPad hooked directly to a boat’s WiFi data access point, without a WiFi radar. So the updated TimeZero should see some Vesper data streaming from Gizmo’s router, AIS included if I add the module. And I’ll bet the TZ app does good AIS target plotting, like its MFD and PC sisters. But perhaps I’m getting ahead of myself. Besides the announcement, Nobeltec has a detailed TZ/DRS4W/AIS FAQ for download and they promise a list of compatible WiFi bridges when the update materializes sometime next spring. Who’s now more interested than ever before in Furuno’s WiFi Radar and/or the Nobeltec TimeZero app? 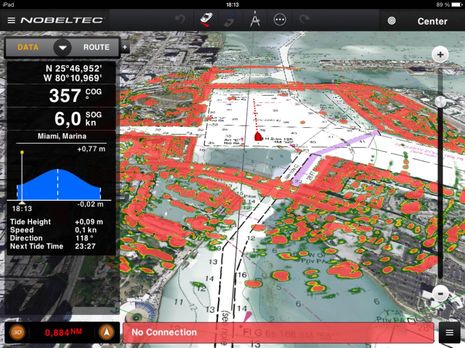