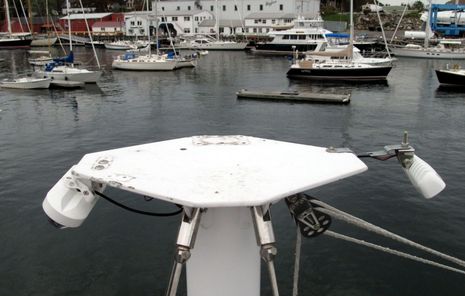 Temporarily mounted on Gizmo’s scruffy masthead are two pretty neat LED flood lights. At right, facing aft, is a Lumitec Caprera, which purports to replace a 55 watt halogen while only using .9 amp and retailing for about $150 with a 22,000 hour output life.  It’s sealed into a deeply powder-coated cast-aluminum housing, comes with the tilting stainless bracket shown (but not the jury-rig strap), and seems very solidly built.  At left is an OceanLED Amphibian A6, which is mainly meant as an underwater light but somehow dissipates heat well enough through its polymer housing (and Tritonium lens) to be used anywhere. The bracket shown, which can cleverly fix the A6 any which way, is a new OceanLED accessory (so far not on its web site). Amphibian A6’s draw .5 amp, claim a 40,000+ LED life, and retail for about $330.  To my eyes, and to those of several Gizmots, the Lumitec is a brighter light…

In fact, I’m pretty sure I could read a book sitting on Gizmo’s boat deck, about 12′ under the Lumitec, and it does a great job of illuminating the swim platform and any dock or float I tie up to. But then again, the OceanLED does not seem the 40% less bright its power draw suggests, and might be the right choice for someone seeking the lightest, most corrosion resistant and power efficient flood available.  And, by the way, Gizmo’s old pair of sealed beam incandescent flood lights — which didn’t seem much brighter — drew 2.7 amps each,
one was blown when I got the boat, and changing its bulb
would have been a major pain.
OceanLED is the market leader in underwater lighting (and, yes, I am going to try a pair of A6’s on Gizmo’s stern, “eco nazis” be damned), and its technology seems to be admired by all competitors. They’ve just announced Amphibian Pro A12’s that are purportedly 75% brighter than the originals (but must be non amphibious), and will soon be showing their Liet interior LED lighting.  Lumitec is less well known, but I’d put it up there with OceanLED (and Imtra) as a company that’s truly serious about LED R&D for us boaters.  I’m impressed with the tech savy of Lumitec CEO John Kujawa (who you can meet in this Mad Mariner video), not mention his focus on getting quality LED marine lighting down to more reasonable pricing.  But I remain convinced that LED lighting is so complex, and moving so fast, that it will pay to do business with high quality vendors.  Anyone else out there tried LED spreader lights? 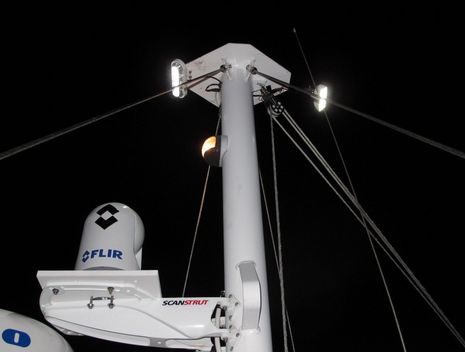