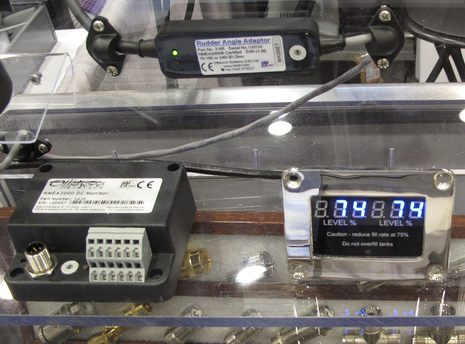 When we argued recently about how much NMEA 2000 rules inhibit hardware innovation, one success story I thought of was Offshore Systems (UK) Ltd, which developed an interesting N2K solid state tank sensor I first wrote about in 2005. Some 4,000 installations of the 3271 Volumetric Fuel Sender still doesn’t make Offshore a large company, but founder Bruce Coward has continued to create innovative N2K hardware, all of which is both NMEA and CE certified. The photo above shows a few such items seen at IBEX…

At top is the 3165 Rudder Angle Adaptor, which has two features I don’t think you’ll find elsewhere. One is Green and Red port/starboard LEDs that make setting up the actual resistive angle sensor possible without software calibration in a display. And the other — which is common across the Offshore line — is an onboard switch for selecting the N2K “instance”. On a one-rudder boat this would just be left at 0 but if there was a second rudder indicators in use — perhaps to measure mast rotation or some other angle — it would need a different Instance number so that displays could tell the difference.
At lower left in that top photo is Offshore’s new 3410 DC Monitor. I have questions about exactly what sort of current sensors it uses, and wish Offshore would post all its manuals for downloading, but it certainly seems to have all the features of the competitive devices along with some niceties like that Wago “Clamp Cage” terminal block.
Finally, that IBEX display photo also shows Offshore’s 3210 Dual Deck Gauge, which is based on the nifty fill cap display it introduced in 2006. Offshore even makes a non-N2K version these days, and another nuance introduced recently is an Averaging Module for long tanks that can be better tracked with two sensors. Again you can see Offshore’s penchant for built-in instance switching and informative LEDs.
It strikes me that Offshore is something of a poster child for how NMEA 2000 can be used for innovation. But it’s not easy. After all these years, for instance, Offshore gear is still not easy to find. While it’s great news that Offshore Systems is now being wholesaled here in the U.S. by Gemeco Marine Accessories — which has become something of a NMEA 2000 specialist — the more online-retail-style U.S. outlets, like Jamestown Distributors and the NavStore, don’t seem to carry the full line. Being a small N2K hardware innovator is hard, but Offshore Systems keeps plugging along. 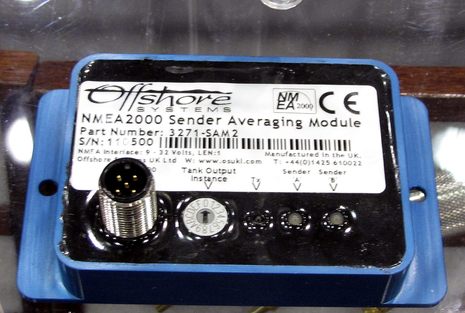