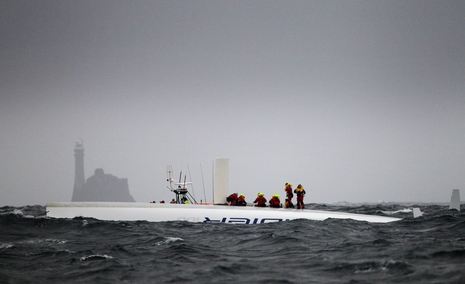 Man, can you imagine how many scary moments preceded this photo? The remarkable thing is that all 21 crew members of Rambler 100 survived her capsize in rough and foggy conditions just after rounding Fastnet Rock on Monday evening. The yacht — which I gawked at as Speedboat in Newport last fall — purportedly turned turtle just 30 seconds after her keel snapped off, leaving several crew caught inside and upside down. EPIRBs and PLBs had something to do with the 100% successful rescue, though it’s hard tell which and how…

This Rolex video gives a pretty good overview of the rescue efforts, but for a real taste of what it was like aboard Rambler you should listen to navigator Peter Isler’s phone interview with Sailing World. Isler mentions that it was a “pocket EPIRB” (aka PLB) that got them found but ACR has been told that one of their GlobalFix Category 1 EPIRBs was used to alert the Royal National Lifeboat Institute of their distress. The Irish Times also mentions the PLB along with some smart use of set and drift prediction software by some Coast Guard radio operators.
If the EPIRB did indeed fail to activate for several hours, it will be good to figure out why. But at this point it seems obvious that redundant safety electronics helped the Rambler crew, as did all the inflatable life jackets they were wearing and their efforts to help each other both on the overturned hull and in the water. And of course all the skilful Irish rescue teams. I particularly enjoyed this “day after” story.

Unfortunately the crew of WingNuts, seen below with obstruction markers added, did not all survive its capsize when storm cell winds hit over 100 knots during the Macinaw Race. It’s not clear if EPIRBs or PLBs were part of the rescue efforts. An early official report mentions that each crew person had a personal beacon, but I’ve heard that those may have been Spot Messengers, which aren’t really appropriate to the task. Meanwhile this in-depth Sail report suggests that it was a whistle and some excellent seamanship by some fellow racers who saved those who weren’t hurt by the initial violence. An investigation is planned, and readers may know about other valuable details of these distress situations. Be careful out there! 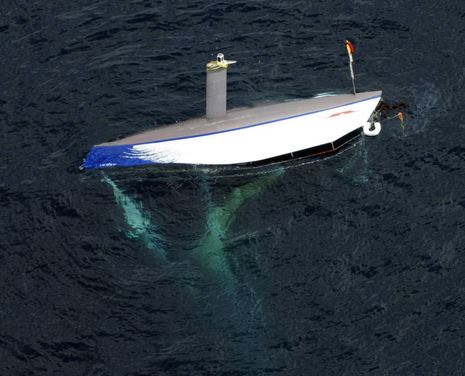