Way down the long list of new features that came with April’s LightHouse v3.9.46 for Raymarine Axiom MFDs is “Tank naming and Sender Calibration” and it turns out that means NMEA 2000 tank senders made by Oceanic Systems. Which is a semi-big deal because a significant disappointment of N2K is that while many standard data PGNs are truly plug-and-play across brands, sensor calibration is usually not. What’s more, I learned about this from my friend and Camden Harbor float mate Jud Sawyer, and I got to attend the semi-exciting proceeding. 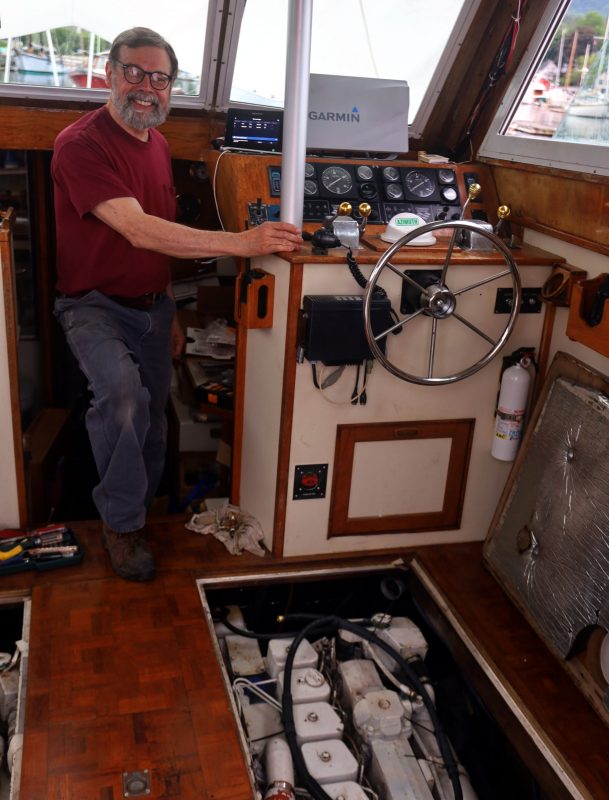 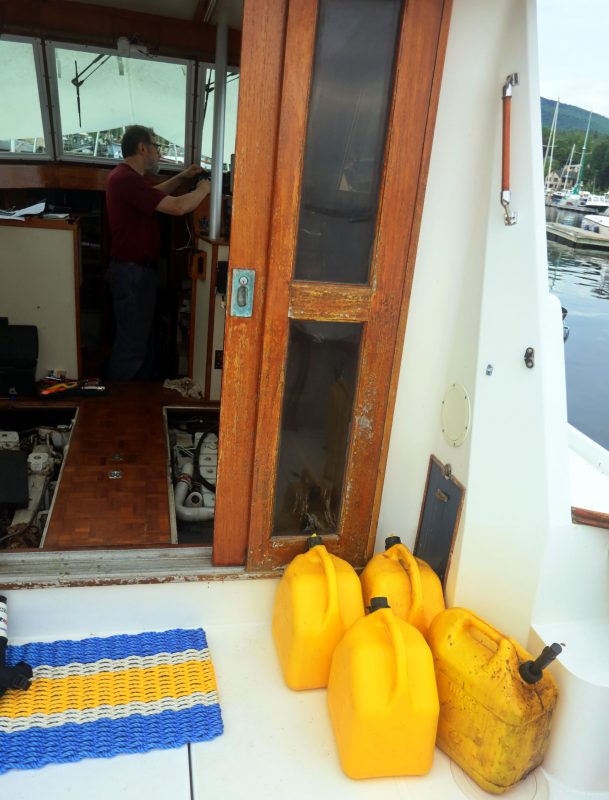 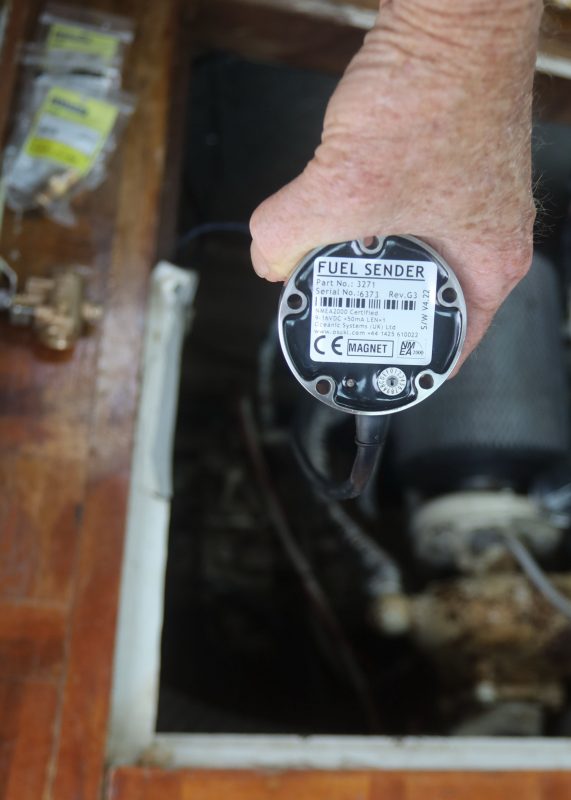 I sometimes thank Jud on behalf of the marine electronics industry because while being a true frugal Mainer he also enjoys treating his well-aged Shannon Brendan 32 to some tasty technology, and his taste (and DIY skills) are well-honed from a lifetime of engineering and tinkering. Nonetheless, he did not at first realize that the potentially accurate Oceanic tank sender info he hoped to display on his very capable Garmin GPSmap 1222xsv could not be calibrated by the Garmin.

For a while the possible options were sending the senders and tank measurements to an Oceanic dealer for volumetric calibration or buying Oceanic’s 4-inch 3345 display. But then he learned that the job could also be done by a similarly priced Raymarine Axiom 7 — thanks to sales volume, not liquid — which could also do a whole lot more on the pontoon boat he trailers to lakes.

So when we rendezvoused last Saturday morning, Jud had the Axiom and the port tank sender temporarily installed on his NMEA 2000 network while the starboard sender was fully installed in the new and empty starboard tank. (How the port sender gets fitted into the tank that doesn’t need replacement remains a mystery). He’d also lugged in a lot of full five-gallon diesel jugs. 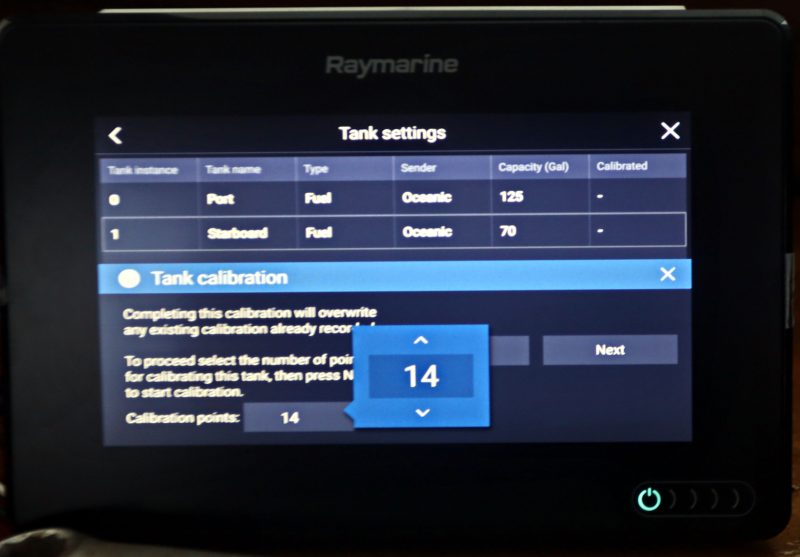 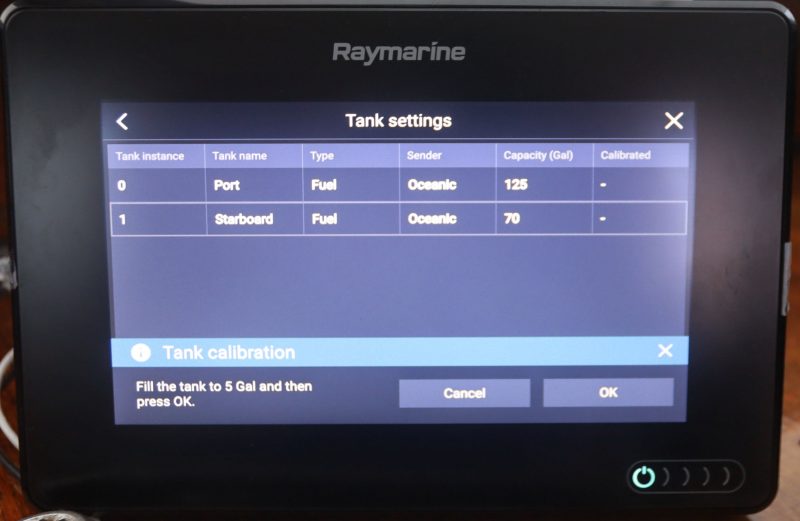 One of the first things we learned was that 14 is not actually the right number of calibration points for a 70-gallon tank divided into five-gallon increments (because point 1 is zero). Once Jud set that number to 15, the Axiom asked for the first five gallons (instead of 5.38) and he was off. Drain a jug, press OK, drain another, press OK, repeat, repeat, repeat, go to the marina for refills, and repeat.

I’ve seen more flexible tank calibration routines — like how Gizmo’s CZone Signal Module tank settings can be tweaked at any time for any known fluid level, and also saved as a file in case of module replacement — but credit to Raymarine for a pretty good start. You can find all the details well explained the LightHouse 3 v3.9 Advanced Operation instructions (PDF), starting on page 77. And, yes, configuring a rectangular tank is much, much easier. 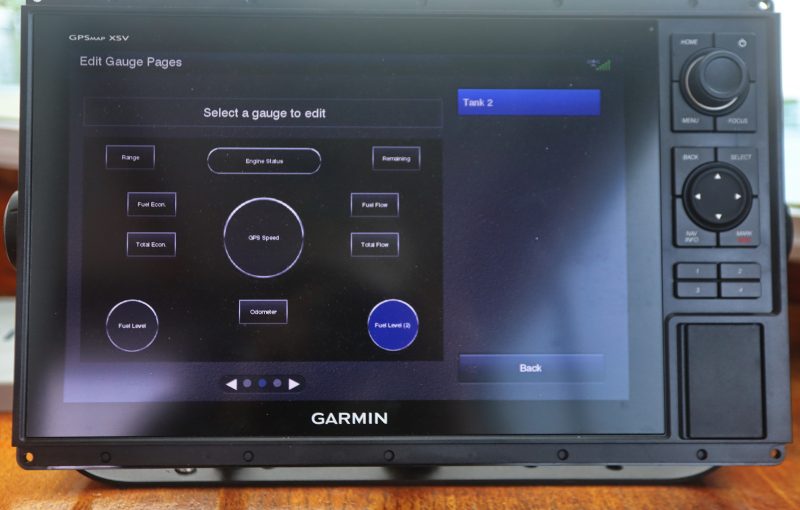 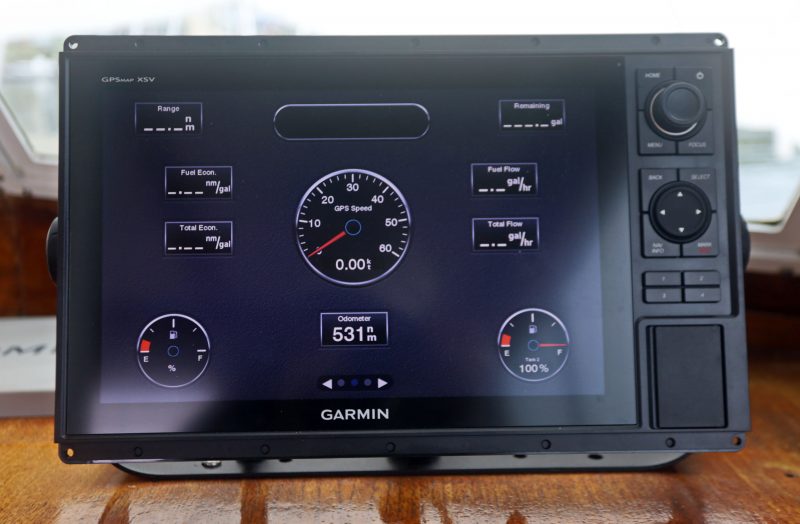 In Jud’s case, the next step was making sure that the tank level information got to the Garmin which will stay on the Shannon, and I got to show him how Menu/Edit Gauge Pages let him select which tank showed where. The hoped-for “100% Full” on Tank 2 (aka “Starboard Fuel Tank,” which can also be specified on the Garmin) got him grinning, and I suspect he’ll also grin when he gets to check the Garmin’s fuel used number against his next fill-up.

Then again, I felt obliged to explain what’s required to install his recently purchased Maretron fuel flow monitoring system — either a Maretron USB100 bridge and laptop, or a Maretron DSM — and how’s he going to end up with two possibly discordant counts of fuel used, remaining, and so forth (as I went on about here). But here’s the bottom line: we both enjoyed a good Saturday morning on our float.