In early 2013, installing a CZone Signal Interface to put Gizmo’s tank levels on my NMEA 2000 network was a very pleasing experience. In fact, I’ve kept it installed for long testing and have become quite dependent on its reliable performance. So it was bad news in January when I somehow bricked the module while trying to update its firmware after all these years — hey, the CZone system isn’t really meant for DIY use — and even worse when I didn’t get back to the boat until just before heading north. But, dang, replacing the Signal Interface also turned out to be pleasing.

First of all, it’s easy to buy MasterVolt CZone system parts like the Signal Interface; while they’re about $249 retail online, they’re also available lower at outlets like eBay (and right out of inventory from the good folks at wholesaler Gemeco for pros). Now note in the photo above how the nicely detachable green terminal block easily fits through the portal that gets filled with the black wire seal. So, no, I did not even have to switch the wires from Gizmo’s original Wema tank sensors to the new terminal block; that whole block-and-wire assembly simply popped out of the old module and into the new. And if there were other CZone modules installed onboard, the replacement job would have almost been over. As explained here, I could have set the dipswitches (upper right) to give this SI module the same system ID as the old one, a copy of its configuration would have automatically copied over from another module, and done. 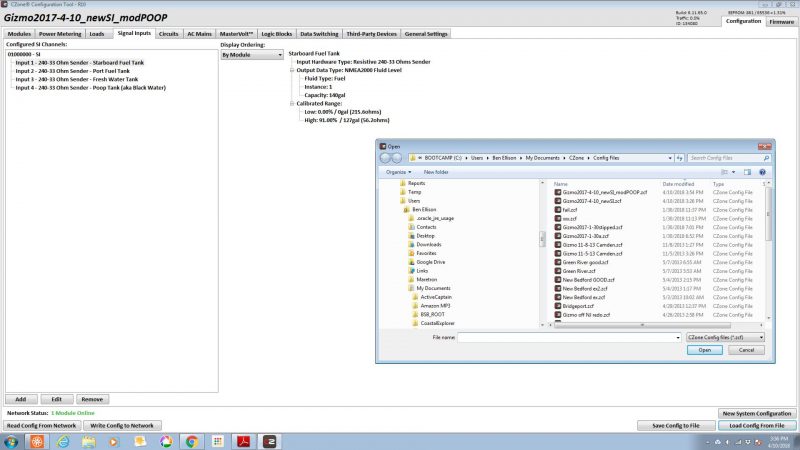 A saved CZone network config is already loaded, but this is how it’s done 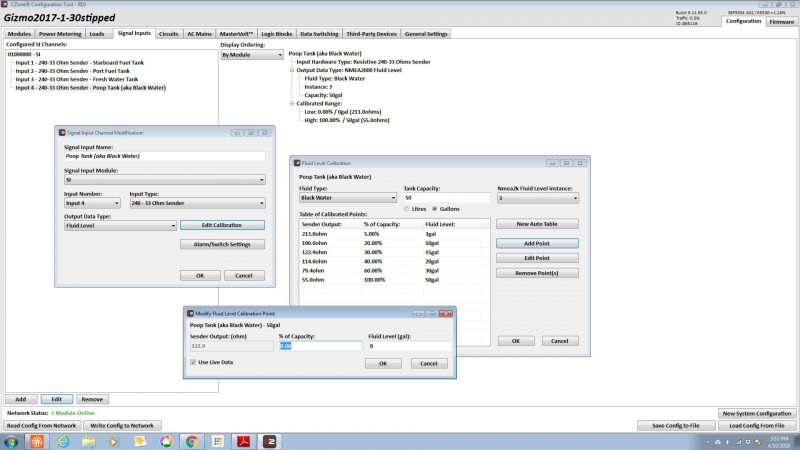 Instead, I used another level of CZone network backup, which is their PC configuration tool used with a CZone USB CAN Adaptor. Though there’s a lot about the software I don’t understand — see what CZone can do on a Sabre 66 — my task seemed even easier than it did in 2013. I simply loaded the network config file I’d saved just before trying the firmware update in January and then “wrote” it to the network.

Actually I could have used any of the config files I’d saved as I perfected the tank calibration five years ago, but now Gizmo has exactly the tank sensing it had, plus I’m all set up to improve it. In fact, I’m thinking that I could make use of the remaining two signal inputs on the SI and you may see a third screenshot illustration up there soon. Maybe I should be blaming CZone for the module failure, but its replacement sure was impressive.