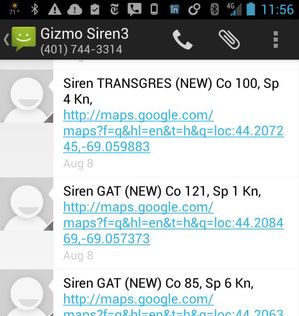 Boat theft is very rare in Maine, but on a recent Saturday night someone apparently “borrowed” a big twin outboard off a local dock for a “joy ride” during which something was hit hard enough to hole the topsides, and then they put the boat back on the dock and vanished! To my knowledge the mystery remains unsolved, but it sure jogged my memory about the Set feature on the Siren Marine cellular monitoring system I’ve been testing for over two years. The partial phone screen above shows what happened when Gizmo moved more than about 15 meters several days after I texted the “SET” command to the Siren. First I was notified that she’d TRANSGRESsed the geofence set up by the SET command and then the Siren started texting me every five minutes with GAT (Geofence Automatic Time-based) reports that included course, speed and a lat/long link to Google Maps. I could have guided the Maine Marine Patrol to the transgressor pretty quickly, if the “villain” hadn’t been myself… 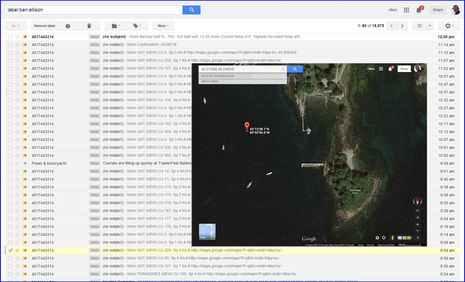 Click on the screen above for more detail on the same geofence test, including an inset of a Google Map link (showing Gizmo near a granite breakwater testing the now functioning EchoPilot FLS). Here the messages are in email form because one of the four phone numbers the Siren can text is set to be my Google Voice account, which can pass along texts as emails. By my count the Siren delivered almost every 5 minutes a GAT report until I disarmed it with the NOSET command, and that’s been a key finding in my long test. The Siren system is wonderfully reliable, even in the very odd texting situation found here in Camden. Verizon, AT&T, T-Mobile and other cell phones work pretty well here in all regards, but devices that use GSM SMS messaging often do not. I couldn’t get the Maretron SMS100 to work here, though I tried both AT&T and T-Mobile SIM cards, and I couldn’t get a C-Pod AT&T-based system to work here either. In fact, the Siren had trouble at first, too, but as I described in my first Siren review, founder Dan Harper dug into the problem and solved it with a service plan that’s worked fine just about every day Gizmo has been in Camden or anywhere else during the last two years.

I just got the text above and hence know that Gizmo’s solar panels are working well today and the refrigerator temperature (where I installed the Sprint’s included probe) is just where I’d expect when no one has been on board using it. I left this running all winter even when the boat was hauled, because it turned out that the panels could keep the batteries up even under white shrink wrap, except for about one dreary dark week around Christmas when I felt obliged to run the shore power cord, thanks to Siren monitoring. Recently, I changed the reporting to twice a day, about midnight and noon, so I can also see the battery bank level at rest with no solar input. The number of messages is not a concern because these days Siren’s plan is unlimited to all four possible phone numbers (for $180 a year if paid that way). 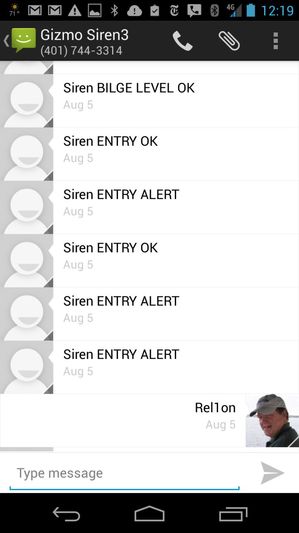 So I remain impressed with the Siren system, and it continues to eliminate some anxiety from owning a beloved boat (an anxiety you may be in denial about until the boat starts texting you “all is well” messages). On the other hand, I’ve been lazy about trying other Siren features and so last week I fooled around with bilge level and entry alarms and even a relay. It was no surprise that everything worked well (when I had the right sensor), and it was good to see that Siren’s install documentation has gotten truly refined. I still hold out hope for a monitoring system that integrates my boat’s existing NMEA 2000 sensors — and plan to try the Maretron SMS100 again once I get out of Camden — but must admit that the Garmin GDL 40 that I once imagined as evolving into a great multi-purpose N2K cellular link isn’t even offered anymore.. 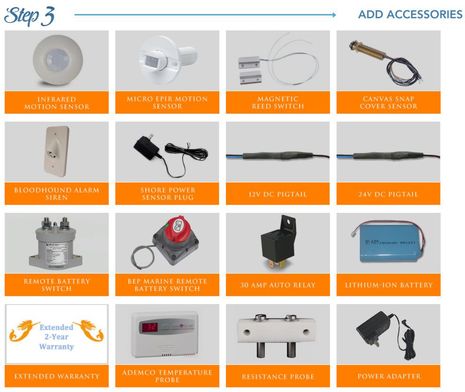 I am disappointed that Siren hasn’t yet released the Android app that would make texting commands to the device as easy as it is for someone with an iPhone, but I note that they have gathered an attractive stable of sensors and relays that are proven to work with their system. They’re also willing to help customers design a particular boat’s system and can even create custom commands, as illustrated below. The diagram and spreadsheet forwarded by Dan Harper show a system where either a motion or a snap sensor can fire off a horn as well as text the owner, among other features like keeping an eye on shore power. There’s something to be said for a marine electronics company that does one thing well (even if it goes against my “glass bridge” vision of the future).

Siren Marine only covers U.S. waters, but are they the best cellular monitoring choice given that limitation? I believe that GOST offers remarkable security systems for big boats and also have deep experience outfoxing the professional thieves who lurk around south Florida and the Caribbean. But who besides Siren is offering security and system monitoring to smaller coastal boats like mine? Please share your thoughts. Also, if you are interested in a Siren system, there’s now a 15% hardware discount — “Pixie or Sprite and any accessories” — if you enter the code “PANBO SUMMER” and also purchase a service plan. Thanks, Dan! 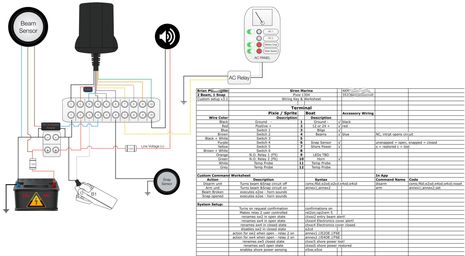