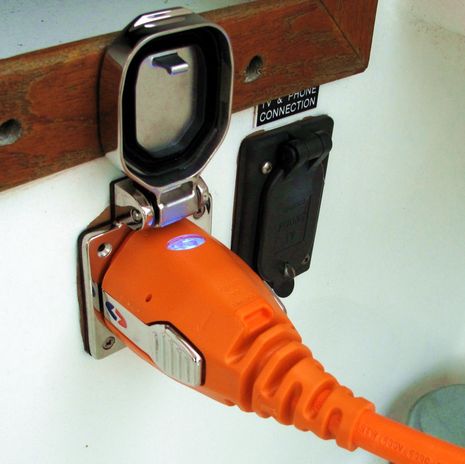 I’ve got shore power running to Gizmo right now, as I’m trying to get the batteries in tip top shape for the frigid months to come, and I feel a lot better about that situation because I recently installed the SmartPlug system above. Maybe I’m paranoid but I’ve heard of so many boat fires which started at the shore power inlet that I’m always reluctant to leave one active when I’m not around. But that 30 amp SmartPlug inlet is carefully designed to avoid heat-inducing resistance and it also contains a trip thermostat which cuts power at 200º F (just before wire insulation begins to soften). Plus the inlet is very easy to install, and when you first use the orange plug itself, you too will likely wonder why we’ve been messing with twist locks all these years. With its obvious orientation and lock levers, a glance at its straight blades is not necessary. The blue “I’ve got power” LED is a useful touch too. But can SmartPlug change the traditional hardware world of shore power?…

When the SmartPlug design came out several years ago, the advantages seemed pretty obvious but I wondered if many boaters would bother to make the change. The hardware is still more expensive and until marinas add SmartPlug outlets to their power towers, you still need to convert from SmartPlug to twist plug somewhere along the way. The various standards organizations haven’t seemed quick to recognize the SmartPlug’s safety features either.
But the SmartPlug company seems very determined, and its design has earned some very important support. For instance, Ed Sherman is adamant about how SmartPlug is a “safer choice” and he’s got thermal images of traditional inlets to help prove his point. Ed — who runs the ABYC’s educational program — also wrote a strong piece in the Dec/Jan issue of Professional BoatBuilder questioning the National Fire Protection and National Electrical Manufacturers Associations for not approving the SmartPlug design as marina outlets.
It’s also noteworthy that West Marine not only decided to sell SmartPlug gear, but highlighted the new 30 Amp Dual Configuration Cord Set as one of its five Innovative Products for 2011. You can hear West’s long-time and much-respected product guru Chuck Hawley explain why on this YouTube video. My own YouTube video is not so professionally produced — in fact, it’s a somewhat goofy time-lapse affair — but it does illustrate how easy it is to replace a standard 30 amp inlet with a SmartPlug. What you can’t see, though, is my increased peace of mind. I’ll give it a thorough test in the coming months, but I’m already pretty sure that SmartPlug’s time has come, at least for my beloved boat.