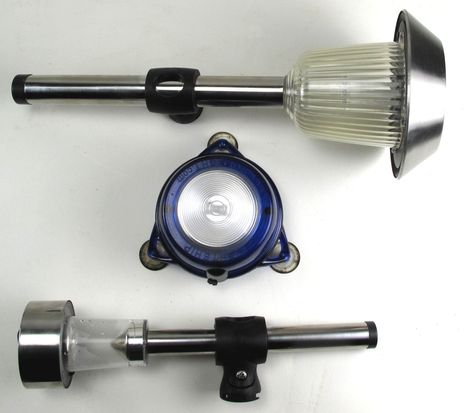 Daylight today was at the minimum, at least in my hemisphere, and I was also fiddling with various holiday lights (which might be related phenomenon). So it seems like a good time to write about these SolLight solar-powered LED fixtures that have been lighting up my life for years. I started testing that LightShip model in early 2007 and when Gizmo came along in the spring of 2009 I stuck it to the hatch in the head, where it’s served well for three seasons. It’s left so that the dim red LED comes on at night and then we often switch to the brighter white when using the facilities…

Admittedly the LightShip wasn’t working when I peeled it off that hatch today — and the suction cups have gotten pretty moldy and stiff — but once I replaced the AA rechargeable battery, damned if it didn’t light right up again. Pretty amazing for a five-year-old $15 light, wouldn’t you agree? Plus I can see from SolLight’s blog entry on how to change that battery that the LightShip has gained more LEDs since 2007 (though the price has also gone up).
The story is similar with the RailLight Mini and Premium models also seen in the top photo. I wrote about the Mini in June 2010 and the Premium soon joined it, so both have been lighting up Gizmo’s upper deck and antenna mast for two seasons. I think that the Premium is just as visible as most anchor lights I see, and I love having lights that not only power themselves, but also turn themselves on. In fact, they’ve inspired at least one local lobster man to stick a Walmart-style solar LED on his cabin top. But I’m not sure how that will work out, as only about half the yard LEDs I’ve tried are still working, while the none of the SolLights have failed. And they have some moxie; I confirmed last week that both SolLights could stay lit through nearly the longest night of the year though charged during nearly the shortest day.
Recently SolLight sent me its most recent product, the SoliCharger-SP, and though at first it reminded me of a late night infomercial — it slices, it dices! — I’ve come to appreciate it. Actually, I’d sort of forgotten it until I was in the shop with a near dead cell phone. Darned if it didn’t put a pretty fair charge into it, and fast. And I’m using an extended battery that’s almost triple the mAh of the standard model! You can even charge the phone and run the speakers at the same time, as illustrated below, though the bass is pretty weak. What I’ve learned altogether is that SolLight does indeed make “solar-powered products that really work.” May your days be bright and your boating nights be lit preferably by solar panels and LEDs. 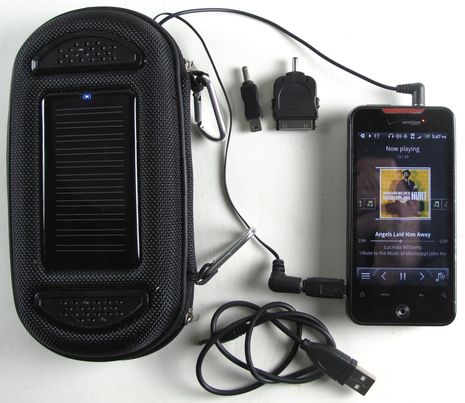