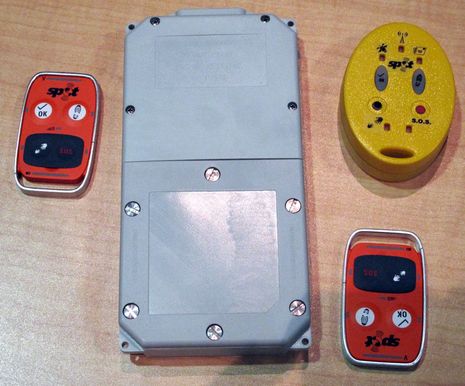 I previewed this on my Ft. Lauderdale Twitter feed (did that thing work for anyone?), and I remain enthusiastic.  HUG stands for Hybrid Universal Guardian, which is quite a mouthful, but then again this puppy can do a lot for a boater…

The light gray “blackbox” portion gets fixed somewhere out of sight,
but with at least a thru deck sky view for its internal GPS receiver and SPOT messenger transmitter.
Power is long life battery, and communication with the fobs is some sort of wireless, supposedly good for 100 feet or so. All the hardware above is prototype and tentative, but the strategy is clear (press release here). A boater gets all the known safety, “hi honey, I’m here” messaging, and tracking functionality of SPOT with just the little fobs…no more duct taping a regular SPOT to your binnacle like Russ (who just got back in the water, Tahiti bound). Plus, when you walk or row the fob away from the boat, HUG becomes an asset protection system, notifying you (the boat owner) and a monitoring center of the “unauthorized movement.”  All this for “less than $500” in hardware, and “about $150” for annual service.  Oh, and there’s a blank sensor port on the box, which will probably go unused when HUG ships next Spring, but SPOT is contemplating bilge alarms, etc. for a future model.
I also liked what I saw of the second generation hand-held SPOT.  It’s much smaller (though it now has a shorter battery life and doesn’t float), and the controls and LEDs look much easier to understand and use.  It also has new “custom message” button, which actually makes three as you can already custom program what messages the OK and Help (now Touching Hands) buttons send out, and to whom.  Incidentally, the Help/Hands button can now be associated with your BoatUS towing account, as announced last Spring.  This is all one-way messaging, a weakness discussed recently, but still it’s neat that this inexpensive hand-held, or the HUG fob, can message family and friends two ways, or BoatUS, or the GEOS Alliance rescue center (aka the Brits in a bunker).  Spot 2 is also supposed to be more waterproof than the original, though Doug Ritter has already smoked a pre-production model.   Doug’s first look is thorough as usual, but I hope to try Spot 2 too. 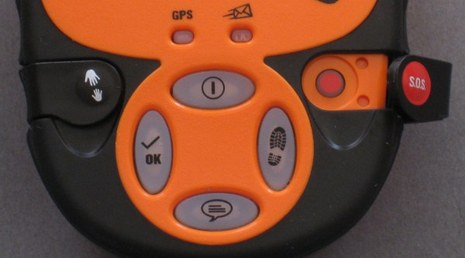