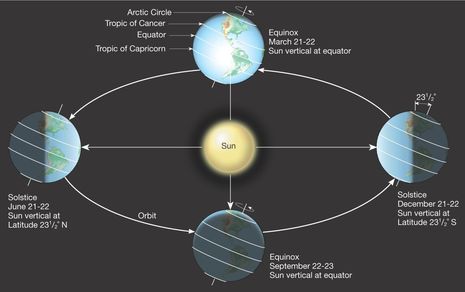 I’m not a pagan but my first wedding was on the Summer Solstice in 1976 and the second was on the Vernal Equinox in 1993. So, yes indeed, today we’re celebrating twenty years wonderfully together (though right now about a thousand miles physically apart). But I want to write about what largely drove those wedding date decisions: my fascination with celestial mechanics, largely acquired through marine navigation, particularly the celestial kind. I learned about the apparent and true motions of the heavenly bodies, the foundations of geography, and what makes this such a balanced day on earth…

So today is one of two during our globe’s annual revolution of the Sun when the axis it daily rotates on is tilted neither toward nor away from the Sun. Today is the day that the Sun appears to track directly over the equator, which is simply and naturally defined as the midway point between the two poles of that axis, also known as True North and True South. Roughly speaking and polar areas excepted, the equinox is the day that night and day are of equal length everywhere on earth, with the sun rising at 6 am and setting at 6 pm local time. Today is also special in celestial navigation because the easiest and most fundamental calculation, the noon sight, is even simpler since there’s no need to look up the Sun’s declination in an ephemeris. If you were at sea you would start measuring the Sun’s increasing altitude above the horizon a little before Local Apparent Noon (LAN) and stop measuring when the Sun appeared to get lower. You wouldn’t even need to know what time it was as LAN is naturally self-defined as the moment the Sun reaches its zenith, when it must be either true north or south of your position on earth. Then you’d just make minor corrections for the height of your eye and possible atmospheric distortion, subtract the result from 90 degrees and, shazam, you’d know your latitude. (So given that I already know that I’m at 33° 40′ 54″N today, I also know that the Sun will be about 66° above the horizon at high noon.) 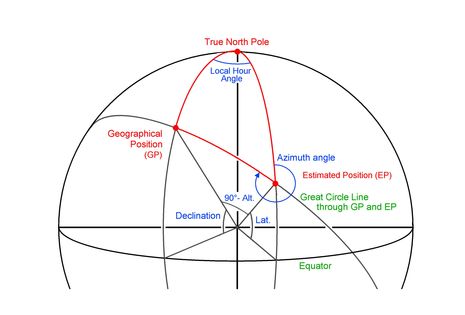 Actually, if you very carefully time the moment of a noon sight LAN with an accurate chronometer, you can also calculate your longitude. That’s because longitude and time are forever married measurements of earth’s rotation, as keyed to True North as latitude, though without a natural start point. That’s how it came to be that the Greenwich Observatory — which I got to visit on my second honeymoon — defines the prime (zero) meridian of longitude and we used Greenwich Mean Time before it was rebranded as Coordinated Universal Time (UTC). Celestial navigation gets a lot more complicated when time/longitude get involved but values like Local Hour Angle and Declination are really just extensions of the grid made natural by our polar rotation about every 23 hours and 56 minutes, with the other 4 minutes of ‘time’ being our orbit around the Sun… 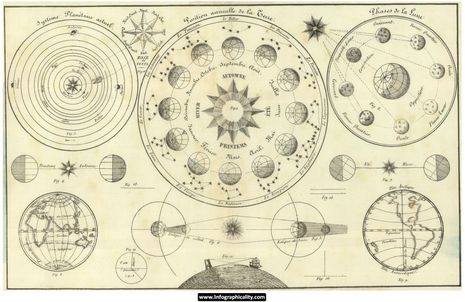 Some navigators were happy to do celestial with just a check sheet and a calculator, but it makes more sense if you actually understand subtleties like the Equation of Time and why the planets wander amongst the stars between one nautical twilight and the next, when you are anxiously trying to find them before the horizon vanishes. And that understanding is also apt to connect you to ancient times when figuring out celestial mechanics was critical to safe passages and even nation building. 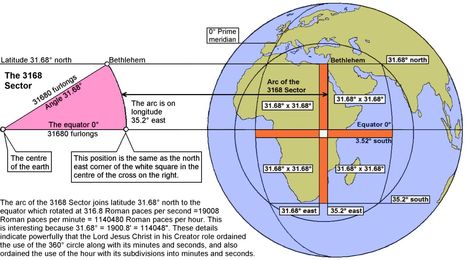 If you Google words like Equinox you’ll find that the study of celestial mechanics has led some people in strange directions, but what moved me after a while was simply how pleasantly small and dumb it makes me feel, yet how well we little humans have organized our knowledge of what we can see. Did you realize, for instance, that if you are on the equator going zero knots Speed over Ground (SOG) you’re still going a neat 60 knots per minute True East because the nautical mile is based on the circumference of the earth? Like the poles, the equator and the lat/long grid I take some comfort in natural standards as oppossed to more arbitrary human-based measurement units.
I also enjoy knowing that our solar system is out in one of the spiral arms of our Milky Way galaxy moving along at 135 knots and I used to be able to find Andromeda, which is one of the only other galaxies discernible through binoculars and also happens to mark the approximate direction the Sun and us planets are currently headed. An wonderful book that captures the excitement of deep space astronomy is Richard Preston’s First Light. 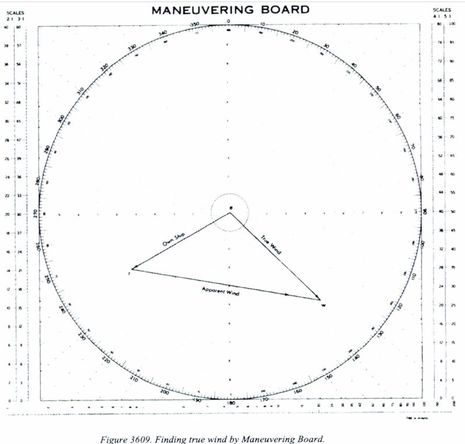 A wonderful place to get into all this is from the deck of ship sailing day after day, night after night, with just horizon and celestial bodies in sight. But that brings me around to a gripe I have about certain sailors and finally gets us to a point about marine electronics. Should a relatively small group of performance-oriented sailors get to define True Wind as relative to the surface of the water and not to True North. I don’t think so!

Here’s the story. If you have a wind display on your boat, it’s quite likely that True Wind is calculated simply by subtracting your boat’s Speed Through the Water (STW) from the Apparent Wind Angle and Speed sensed by the cups and vane on your mast. In other words, the motion of the water the boat is traveling through is not accounted for, which is why it’s somewhat better termed True Wind relative to water. However, this value was not only much easier to calculate before GPS came along but it’s also very useful for establishing performance benchmarks. Once you’ve learned that your boat can do, say, 7.5 knots with the full main and #1 headsail at a certain “True Wind” angle and speed, you can use your instrument to duplicate or maybe improve on the performance because the vagaries of current are not involved. But as useful and omnipresent as this form of “True Wind” is, it’s not really True, is it? 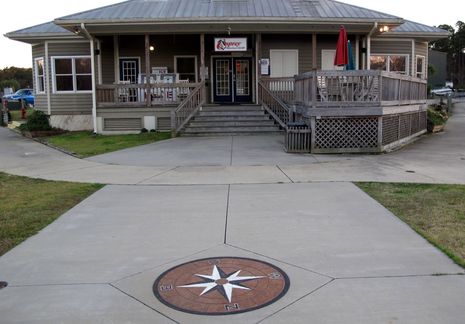 Many earthlings naturally think of True Wind as relative to our planet — just like True North, True Headings, and the lat/long system our charts are based on, not to mention the celestial mechanics I’ve been yammering about. And today true True Wind is relatively easy to calculate, being the difference between the COG/SOG vector and the Apparent Wind vector corrected to True Heading with electronic compass input. Dan, Johan, and I have been sparring over the details of this recently, which was part of my inspiration. A day isn’t completely balanced without a wee rant.
At any rate, I don’t expect to change any sailor minds on this subject, but it would be nice if some stopped insisting that their unnatural form of True Wind was the only True Wind. And maybe some day we’ll overcome the confusion with better terms like Ground Wind and Sailing Wind. In the meantime, here’s wishing you a wonderful equinox. All is well aboard the M/V Gizmo with many installs in progress and all sorts of boating life to ponder. 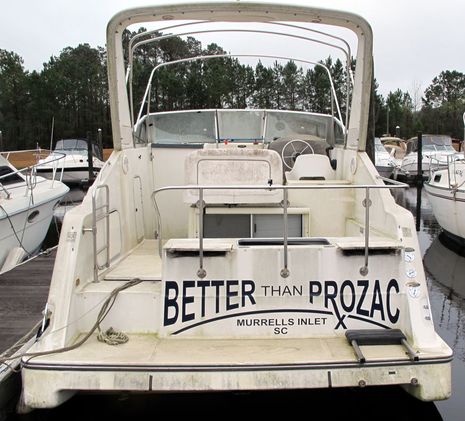