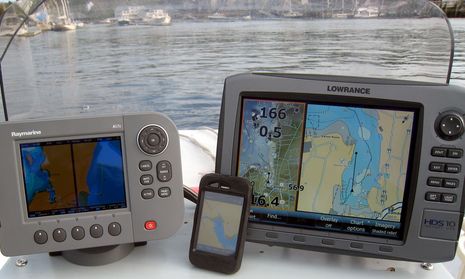 The photo isn’t fair, because the shooter (me) is reflected in the Raymarine A57D‘s screen and the iPhone is in an Otter Box which includes a screen protector that muted its display in a way I don’t notice in normal use.  But there’s some truth here, too; the screen on the Lowrance HDS 10 has been bright, crisp, and completely readable in all light conditions so far experienced on Li’l Gizmo’s completely exposed helm, whereas the other two have sometimes been quite hard to read.  Another truth is…

Another truth is that Navionics, which surely has been on a roll
recently, is producing charts — often in multiple forms — for all
these machines.  The Ray A is showing its built-in Navionics Silver
level charts, but can also display Gold and Platinum cards, the iPhone
is showing Navionics’ own Gold Mobile 2 but that format is also
supported pretty nicely by iNavX, and the HDS is actually showing
Lowrance’s own Insight USA charts, which are quite good but which Navionics is competing well with.
As of a recent software update, the HDS can also display Navionics Platinum SD cards, and I’m impressed with what I’ve seen so far.  While the photo overlay definitely needs some work, the 2D and 3D chart views looked great (better than the early screen shot below) and zoomed/panned, and even went turbo, with fair agility.  The HDS seems to have plenty of horsepower for snazzy chart manipulation — even while hooked to its fishfinder transducer, several NMEA 2000 sensors, and a Class B AIS transponder — and I’m sure Navico developers are working hard to improve the presentations even as I write. I intend to do more Ray A and HDS testing on Li’l Gizmo, and the big Gizmo test platform is coming together too.  But first I have to repair a little Memorial Day damage 😉 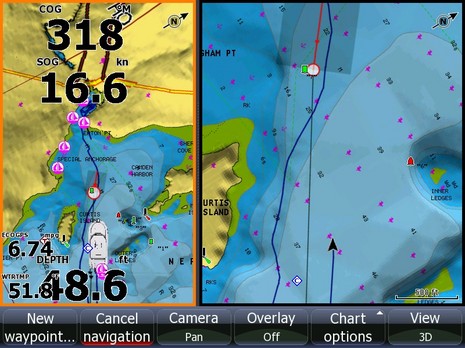